Youth share of the vote strong in Nevada; overwhelming support for Sanders 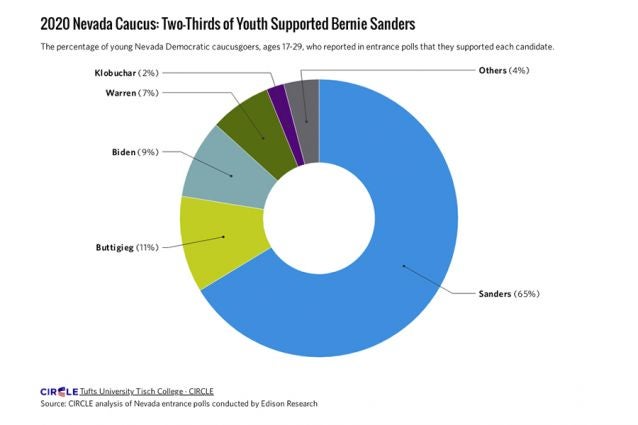 Young people made up 1 in 6 caucusgoers in Nevada, and Sanders received 65% of the youth vote.

According to our estimate, 3% of young Nevadans participated in the Democratic caucus. A Republican caucus did not take place.

Youth turnout in Nevada has historically been low. CIRCLE estimated that it was 5% in 2016, when both parties held caucuses. In 2012, the last election cycle in which only one party (Republicans) had a competitive caucus, youth turnout was 1%. However, the youth share of all caucusgoers (16%) in 2020 was higher than 2012.

Sanders, who garnered the support of about half of young people who participated in New Hampshire and Iowa, did even better with young Nevadans (65%), as primary voters overall shift towards Sanders. Among youth, he had more than a 50-point lead over second choice, former Mayor Pete Buttigieg (11%). No other candidate reached double-digit support among youth, though former Vice President Biden was close at 9%.

While turnout was low, the extent to which youth consolidated their support for Sanders certainly contributed to his win in the caucuses by a wide margin.

“Nevada is the first state to vote that has a more diverse electorate, though historically, turnout in Nevada caucuses have been low. Overall, young people constituted a strong share of the vote, and thus their influence and overwhelming support for Sen. Sanders contributed to his victory and front-runner status,” said Kei Kawashima-Ginsberg, director of Tisch College’s CIRCLE. “The stubbornly persistent narrative that young people are apathetic is coming under fire in 2020, as youth continue to make their voices heard and their votes count.”

CIRCLE is a nonpartisan, independent, academic research center that studies young people in politics and presents detailed data on young voters in all 50 states. CIRCLE is part of Tufts University’s Jonathan M. Tisch College of Civic Life. Recognizing that young voters are diverse in many ways, CIRCLE will continue to release exclusive polling and analysis throughout the 2020 election cycle. Please visit circle.tufts.edu for the latest data and research.