Teaching Kids About Nature to Save the Planet 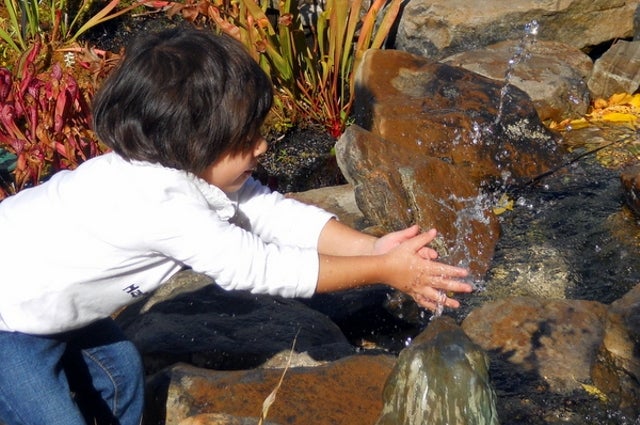 George Scarlett’s love of nature runs deep. He grew up in Baltimore, but it was over many years of summer camp in New Hampshire where he began “to see the world as a source of wonder and web of life.” He continues to experience that wonder in nature’s beauty, be it hiking a trail in the Grand Tetons, paddling a canoe down the Concord River, or walking the open field behind his office at Tufts.

Now Scarlett is seeking to pass that connection with the natural world on to the next generation, an exercise he thinks is urgent given the state of the planet. To that end, Scarlett, a senior lecturer in child development in the Eliot-Pearson Department of Child Study and Human Development, has been teaching for the past three years a class called Children, Nature, and the Development of Earth Stewards.

The class explores programs and methods that connect children and teens to the natural world in ways that support their development as stewards of the Earth—from forest schools, wilderness programs,environmental education, and urban gardening programs to reading programs using nature-friendly children’s books and teen protests that have captured the attention of the world.

The class has also proved a catalyst for a new online venture to share that information with the wider world. Tomorrow’s Earth Stewards, an online publication, includes articles on programs and methods being used around the world to support children’s and youth’s development as earth stewards. 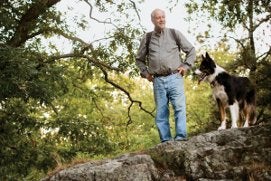 “We can’t get enough hope,” George Scarlett said. “There’s a Greta Thunberg spirit amongst us. There is a new spirit all around the world. You can feel it, and it’s huge. That’s why I’m hopeful.” Photo: Kathleen Dooher
It also keeps readers up-to-date on global environmental issues and news events such as the worldwide teen protest movement. The resources found on Tomorrow’s Earth Stewards are all geared toward giving educators, program directors, and policymakers both practical tools and big-picture perspectives on climate change—“all with a decidly developmental approach to understanding what is best for supporting the development of an earth steward,” said Scarlett.

“Educators for two hundred years have been saying the same thing: the path to earth stewardship starts not with didactic education, but with children being immersed in nature—experiencing nature through the senses and enjoying nature through fantasy and play,” he said. “Those early positive experiences of being in nature provide an emotional foundation out of which can develop a life-long interest in and caring for the natural world.”

And this can be true for city kids as well, he said. “Having positive experiences in nature is possible in cities as long as nature is defined broadly—not narrowly as only what we find in woods and mountains and on ocean beaches,” he said. “What is also remarkable is how these positive early experiences, though they may not be labeled as experiences of wonder, later on become more and more labeled as such.”

The course and website, which he developed with help from a Tisch College of Civic Life fellowship, are complementary, Scarlett said. “The philosophy driving the approach to the course is represented in the site, and students can contribute to the site,” he said.

Nature as a Catalyst

For Scarlett, the turning point came about three years ago when he found kindred thinkers at the organization Biodiversity for a Livable Climate; it seeks to “promote the power of the natural world to stabilize the climate and restore biodiversity to ecosystems worldwide.”

That is a “scientifically true and marvelous, fairytale-like way of understanding evolution,” Scarlett said. As a developmental psychologist, he sees parallels between that perspective and the call to support nature’s ways and the way children engage with the natural world.

“Once children start to see the interconnections and interdependency of living beings, they are ready to dive into explanations of just how interdependency works to keep our planet livable, and how we can restore what nature has been doing long before we humans came on the scene,” he said.

While the prevailing approach to climate change has been dominated by a global call to reduce harmful carbon emissions,Scarlett said that the eco-restoration model is critical to any real and lasting change.

“So much of the conversation tells us that our fate and the future of a healthy planet requires that humans gain control, that nature is the victim,” he said. “But nature is the solution.” For example, he said, fungi, plants, and trees “are all working together as magnificent systems within systems to pull carbon from the atmosphere and sequester it in the ground.”

The challenge now, he said, is to bring these sytems closer to how we experience the planet. “We’re down in nature; we’re not above nature. Rachel Carlson,John Muir, and a host of exemplary stewards have undertood that; they have spoken about the interdependence throughout the natural world. And they have understood our smallness in relationship to the natural world.”

That’s a natural way of being in the world for children, he said. Children feel their smallness in relation to the natural world while they also have an innate curiosity that makes nature an ever-changing source of wonder. What child, he asked, is not curious about crabs, fascinated by insects, captivated by a tidal pool, or delighted by a found feather?

And because that curiosity, he noted, is universal—hardwired into our growing  brains—he is excited by the online potential to share these values and ideas with a global audience. He didn’t build the Tomorrow Earth Stewards site alone, of course. “I couldn’t have done this without a wonderful team,” he said, crediting, in particular, Freedom Baird, an educational technology advisor at Tufts; Eva Heaps, 2019 graduate of School of the Museum of Fine Arts at Tufts for her design expertise; and Ashley Lin, CEO of the nonprofit Project Exchange, who provides social media support and writing.

Scarlett is characteristically optimistic that the Tomorrow’s Earth Stewards site will resonate with those who yearn for a new and positive way of thinking about climate change.

“We can’t get enough hope,” he said. “There’s a Greta Thunberg spirit amongst us. There is a new spirit all around the world. You can feel it, and it’s huge. That’s why I’m hopeful.”