New Hope for a Neglected Disease 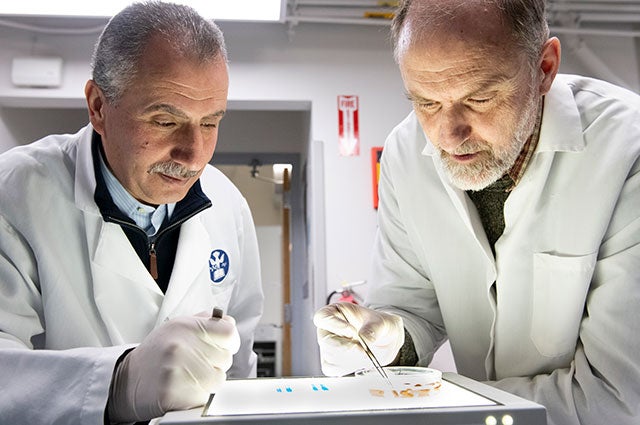 It’s a disease that’s hard to pronounce and even harder to eradicate, but schistosomiasis is worth the effort. Caused by parasitic worms carried by freshwater snails, schistosomiasis leads to about 280,000 deaths each year, with more than 200 million people infected—mostly in Africa, but also in parts of Asia and South America.

Schistosome worms—also called blood flukes because they travel through the skin into the blood stream—can damage the liver, spleen, bladder, and gastrointestinal tract. Infections in children can stunt physical growth and cognitive development. There’s no vaccine, and though there is a drug treatment, it’s not always effective because it targets only adult parasites, not juveniles.

The World Health Organization has called for the development of more treatments and new cures for this neglected tropical disease. Recently, two researchers at Cummings School of Veterinary Medicine published a new study in the journal Communications Biology that may lead to both.

Study authors Akram Da’darah and Patrick Skelly are long-time colleagues who met while working at the Harvard School of Public Health and have been with Tufts for more than a decade. Their backgrounds in parasitology and molecular biology make them a particularly good match for investigating the parasitic worms, named Schistosoma mansoni.  They are tackling one of the disease’s biggest mysteries: How do these stealthy worms avoid detection by our immune system?

“We are trying to figure out how these parasites can live in the body for twenty years without being killed by the host immune system,” said Da’darah. “They are living in the blood, they are disrupting the blood flow, but they don't form any blood clots around them. Obstacles to blood flow, like these worms, should cause blood to clot.”

This led Da’darah and Skelly to focus on the skin of these worms: What molecules exist there, and how do they keep the host seemingly unaware of the worms’ presence? 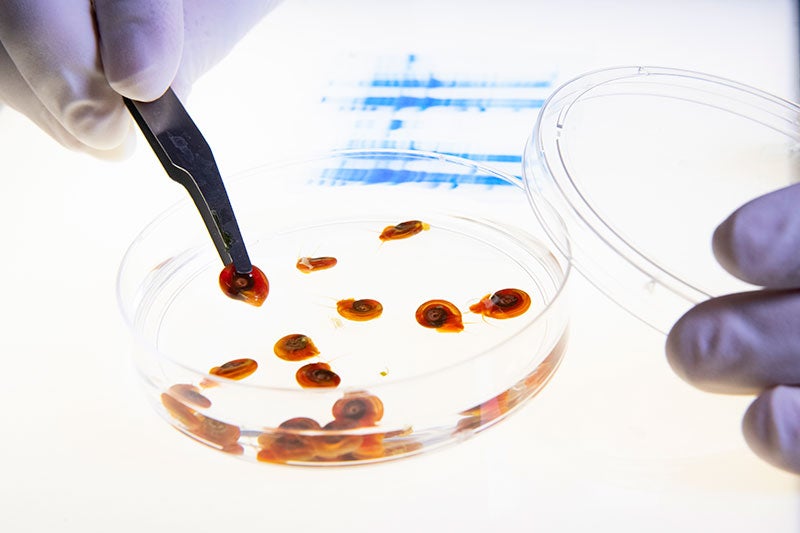 Schistosomiasis is caused by parasitic worms carried by freshwater snails like these, which are handled with care in a lab at Cummings School of Veterinary Medicine. Photo: Alonso Nichols
Over the past several years, Da’darah and Skelly have identified multiple molecules on the worms that can change the biochemical make-up of the environment around them and/or block our immune cells from getting the right signals to fight the infection. One of those molecules is a protein called Schistosoma mansoni carbonic anhydrase (SmCA).

In experiments with mice, SmCA appeared vital to the worms’ ability to establish an infection. “SmCA is probably important in regulating the pH of the worm’s local environment,” said Skelly. For their recent research paper, collaborators at the University of Florence identified compounds that can block SmCA, making it a good target for further research. This knowledge could help develop drugs to counteract the molecules and allow the immune response to attack the worms. Someday there could be a vaccine, though Da’darah pointed out that no human parasitic diseases have one.

Moreover, this research translates to other areas of study, Skelly said. If you can figure out, for example, how worms prevent blood clots from forming, it could lead to new treatments for blood clots that cause stroke and heart attack.

In the long term, knowing more about this sly parasite could “perhaps be useful in areas that have nothing to do with this worm,” Skelly said.