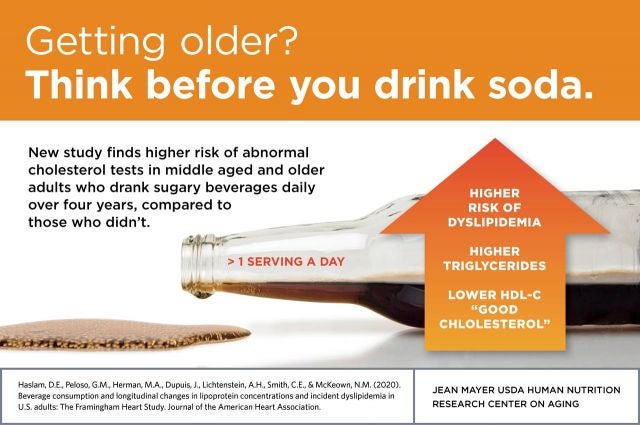 BOSTON (February 26, 2020, 5:00 a.m., EST)—Middle-aged and older adults who drank sugary beverages daily were at greater risk of developing abnormal cholesterol and triglyceride levels compared to those who rarely drank those beverages, according to a new epidemiological study published today in the Journal of the American Heart Association.

The study, led by scientists at the Jean Mayer USDA Human Nutrition Research Center on Aging at Tufts University (HNRCA), found that adults who drank at least one sugary beverage daily during the most recent period of follow-up, which was roughly four years before the assessment of lipid levels, had a 98 percent higher chance of developing low HDL (good) cholesterol and a 53 percent higher chance of developing high triglycerides, when compared to the group who seldom consumed sugary drinks. The researchers observed similar results when they examined long-term intakes of sugary beverages during a follow-up time of about 12 years.

“The results suggest that high intake of drinks with added sugar, such as soda, lemonade or fruit punch, may influence risk for dyslipidemia as we age,” said corresponding and last author Nicola McKeown, nutritional epidemiologist at the HNRCA. “One dietary strategy to help maintain healthier blood cholesterol and triglyceride levels may be to avoid drinks with added sugars.”

The researchers also found that high sugary beverage intake was associated with HDL cholesterol and triglyceride levels that, measured at approximately four-year intervals, were moving in the wrong direction among daily sugary beverage drinkers when compared to those who rarely drank beverages with added sugar – even for a group of adults whose average age was in their 40s.

“With these younger participants, we did see unfavorable changes, but they were likely too young during the short follow-up period to know if they would eventually develop dyslipidemia,” said first author Danielle Haslam. “Our findings contribute to the mounting evidence that sugary drinks should be avoided to help maintain long-term health.” Haslam was a doctoral student at the Gerald J. and Dorothy R. Friedman School of Nutrition Science and Policy at Tufts University working in the nutritional epidemiology program at the HNRCA at the time of the study.

“We are better off quenching our thirst with water. The emerging research on long-term consumption of diet soda on health is inconclusive, so it is prudent to say diet drinks should only be an occasional indulgence,” said McKeown. “As for 100% fruit juice, best to limit consumption and consume whole fruits when possible, as recommended by the 2015-2020 Dietary Guidelines for Americans.”

“Our findings show that what we put in our glass may contribute to greater risk of cardiovascular disease via worsening of lipid levels. Managing blood cholesterol and triglyceride levels is an important goal and a promising strategy for preventing heart attack and stroke,” McKeown said.

As expected and consistent with previous research, sugary beverage consumption was not linked to risk for higher LDL (bad) cholesterol, the authors said.

The researchers analyzed data from more than 5,900 people, comparing changes in blood cholesterol and triglyceride concentrations between exams. Participants were categorized according to the types and frequency of beverages they consumed. The study participants were examined at intervals of four years on average and followed for about 12 years as part of the Framingham Heart Study, which has monitored multiple generations to identify contributors to cardiovascular disease. In their statistical analysis, the researchers adjusted for other factors known to influence cholesterol and triglyceride concentrations, such as obesity, overall diet quality, physical activity, alcohol intake, and the use of cholesterol-lowering drugs.

There are some limitations to the study, including the use of self-reported food data from food frequency questionnaires. The findings are also only generalizable to middle-aged or older adults of European descent. Due to its observational design, the study does not reflect a causal relationship between sugary drink consumption and abnormal cholesterol and triglyceride levels.

For three decades, the Jean Mayer USDA Human Nutrition Research Center on Aging at Tufts University has studied the relationship between good nutrition and good health in aging populations. Tufts research scientists work with federal agencies to establish the Dietary Guidelines, the Dietary Reference Intakes, and other significant public policies.

What Your Blood Type Can Tell You About Your Health

Five Tips for an Ergonomic Workstation