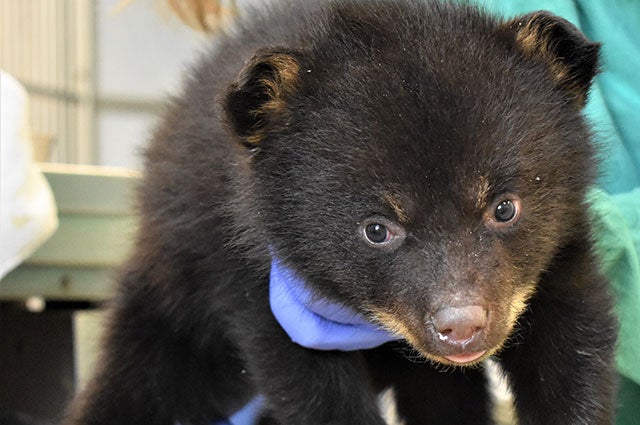 It was another record-setting year at Tufts Wildlife Clinic in Grafton, where more animals were treated in 2019 than ever before. Do admissions continue to grow because more animals are in trouble, more people are aware of the clinic as a resource, or because climate change affects habitats and food supply?

It’s probably some of all the above, said Maureen Murray, V03, a wildlife veterinarian and faculty member at Cummings School. In 2018, the Wildlife Clinic treated more than 4,000 patients. For 2019, that figure rose to 4,410 patients, including 2,169 birds, 2,011 mammals, 217 reptiles, and thirteen amphibians. Animals seen at the Tufts Wildlife Clinic are treated without charge.

“One thing that remains true, year after year, is that the majority of animals we get into the clinic are here because of some interaction with people,” she said. “There are so many ways in which human activity is causing these animals to become injured or get into trouble.”

Patients may have been hit by a car, unintentionally poisoned, or tangled in things like fishing gear. Sometimes the clinic takes in a bird of prey that has been shot, even though it’s illegal to hunt birds of prey. These types of injuries represent the majority of the clinic’s workload and reflect the challenges that wildlife face in our environment.

After an injured animal heals, they are released back into the wild. Most animals are taken back to their territories to be released. Occasionally, as with some juvenile birds of prey or migratory birds, staffers release the animal on the expansive campus at Cummings School of Veterinary Medicine.

Most Memorable Cases of 2019 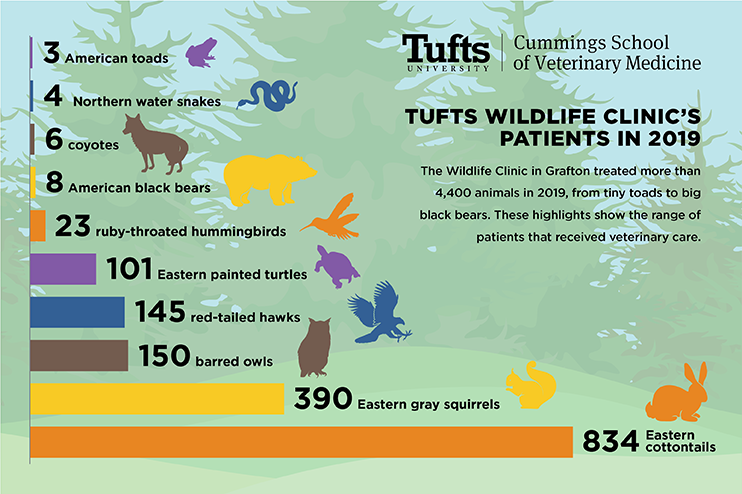 Over the past two years, the number of barred owls at the clinic has doubled, from seventy-one in 2017 to 150 in 2019. Owls tend to hunt by the side of the road, and most of the owls at the clinic were hit by cars. While injuries of this nature in birds of prey aren’t unusual, Murray said, the sheer number of owls arriving at the clinic was highly unusual. “At one point in the season, we had slightly over forty barred owls in the clinic at the same time,” she said—a more typical number at one time would be around 6.

Last year was a big year for baby mammals at the clinic, the most striking being four bear cubs from the same den. They were brought in by Massachusetts Fish and Wildlife personnel, who conduct regular surveys of bear dens throughout the state. The cubs had been orphaned, and though they were a little dehydrated after days without their mother’s milk, Murray said they were otherwise healthy.

“We ended up rehabilitating them here for longer than we normally would with that species, which became a bit of a challenge because they grow, develop, and learn very quickly,” she said. “There was a lot of creative thinking on our part in terms of how to keep them occupied and keep them stimulated. It was an interesting experience for all of us.”

The cubs were transferred to a bear rehabilitation facility in New Hampshire, where they can safely explore the forest, learn how to climb trees, and hibernate until they’re ready to be released into the wild.

Typically, the busy season at the clinic is spring through summer, which is when babies are born, tapering off in early fall. In 2019, the clinic’s busy season extended much later, and on many occasions more than twenty patients were admitted in one day. (A normal day for admissions is closer to half that number.)

“What was unusual and really drove that high number of admissions was the number of baby mammals,” said Murray. “There were a lot of baby eastern cottontail rabbits and eastern gray squirrels. They were just having babies later into the fall, possibly because food—acorns, in particular—was so abundant.” 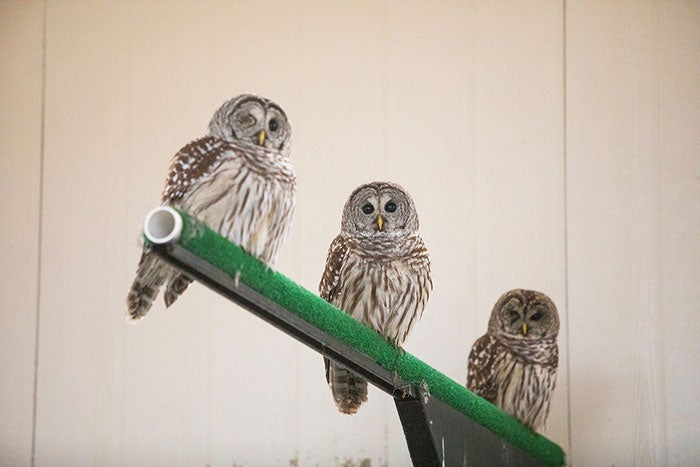 “At one point in the season, we had slightly over forty barred owls in the clinic at the same time,” said Murray—six is a more typical number at one time. Photo: Anna Miller

The clinic also saw a higher number of amphibian cases in 2019, including a few that “underscored the amazing ability of some of these animals to heal,” she said.

There was a toad with a humeral fracture on one side of its body and a pelvic fracture on the other side, which caused a nerve injury that made its leg go limp. The clinic bandaged its tiny leg and gave the nerve injury a little time to heal. The toad made a complete recovery and hopped back into the wild.

A green frog admitted to the clinic with a serious gash across its back, the result of getting tangled up in a fishing net, had an equally happy ending.

“We sutured him up, and from day one, he’s acting like nothing had ever happened,” she said. “It was just so remarkable to us, even though we see almost every day the amazing abilities these species have to heal.”

Animals seen at the Tufts Wildlife Clinic are treated without charge. If you would like to aid the Tufts Wildlife Clinic at Cummings School of Veterinary Medicine in covering the costs of these treatments, you may give online. If you have found orphaned, injured or sick wildlife, you can call 508-839-7918 or visit https://wildlife.tufts.edu/to get advice on what to do next.