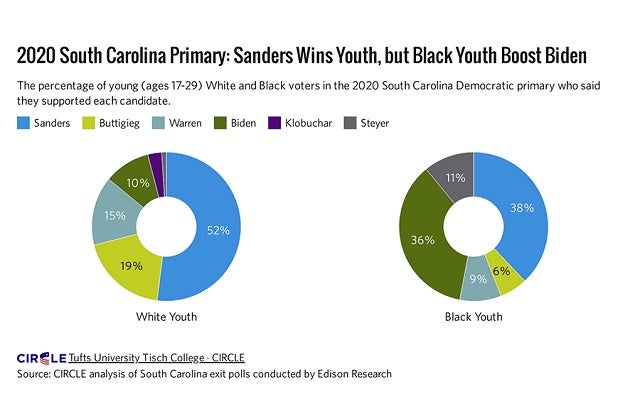 Among the voting eligible population of young people in South Carolina, youth turned out at an estimated rate of 8%, and Sanders received an estimated 43% of that vote.

As he did in every previous state this primary season, Sanders had the highest support from youth in South Carolina, at 43%, followed by former U.S. Vice President Joe Biden at 26%, who won the primary by a wide margin. Former Mayor Pete Buttigieg and U.S. Sen. Elizabeth Warren each had 11% of the youth vote.

“South Carolina was the first state in which we saw a more diverse, Southern youth electorate represent their views in a primary. As expected, the results clearly show that the youth electorate is not a monolith. While Sanders won the youth vote for the fourth state in a row, we are now seeing considerable differences by race, with young black voters splitting support between Sanders and Biden,” said Kei Kawashima-Ginsberg, director of Tisch College’s CIRCLE. “As we look ahead to Super Tuesday, young people will continue to affect this primary season and ensure that their diverse views and voices are part of the national conversation.”

CIRCLE estimates an 8% youth turnout in South Carolina, an increase over the most recent comparable year, 2004—the last time there was only a Democratic primary in the state—when youth turnout was 4%.

Yesterday’s youth share of primary voter was 11%, also higher than in 2004 but lower than in the 2008 and 2012 South Carolina Democratic primaries, when it was 14% and 15%, respectively. Both parties had competitive primaries in those years, which can affect the context and environment in which young people are exposed to information and messages about participation.

CIRCLE is a nonpartisan, independent, academic research center that studies young people in politics and presents detailed data on young voters in all 50 states. CIRCLE is part of Tufts University’s Jonathan M. Tisch College of Civic Life. Recognizing that young voters are diverse in many ways, CIRCLE will continue to release exclusive polling and analysis throughout the 2020 election cycle. Please visit circle.tufts.edu for the latest data and research.

Exclusive analysis of the youth vote in Super Tuesday states will be available this week, and researchers are available for interviews and commentary before and after Super Tuesday. Media outlets should contact Jen McAndrew at jennifer.mcandrew@tufts.edu, or 617 627-2029.