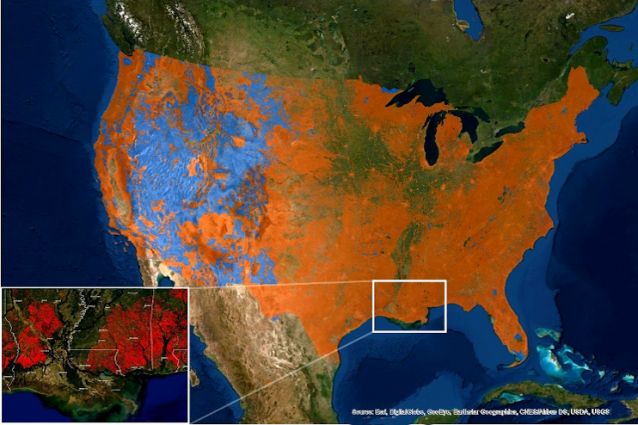 MEDFORD/SOMERVILLE, Mass. (March 2, 2020)— Using more than 30 years of earth satellite images, scientists at Tufts University and the non-profit conservation organization Defenders of Wildlife have discovered that habitat loss for imperiled species in the U.S. over this period was more than twice as great on non-protected private lands than on federally protected lands. As wildlife face a host of survival threats ranging from habitat destruction to global climate change, the study, published today in Frontiers in Ecology and the Environment, provides evidence that federal land protection and listing under the U.S. Endangered Species Act are effective tools for stemming losses in species habitat.

Habitat loss and modification are the primary drivers of global losses in biodiversity, leading to reductions in population size and reproductive rates for many common and endangered species. Scientists have worked to identify the most effective mechanisms for preventing future habitat loss around the globe, yet most studies have had limited geographic scope or focused on only one or a limited range of species.

With a goal of understanding on a national level how land jurisdictions and conservation policies translate to habitat protections on the ground, the study authors collected large scale data on habitat extent across the U.S. for 24 vertebrate species, chosen from among those listed under the Endangered Species Act (ESA) or the International Union for Conservation of Nature’s Red List. The species examined have ranges that include both federal and non-federally owned lands, covering 49% of the country from coast to coast and including all major ecosystems in the continental U.S.

Using national databases of wildlife habitat, the researchers mapped out the 24 species’ ranges, and tracked habitat change in those ranges over time using the Google Earth Engine LandTrendr algorithm. The data revealed that imperiled species lost the least habitat (3.6%) on federally protected lands and lost the most habitat (8.6%) on private lands lacking any protections. State lands and lands protected by non-governmental organizations had losses of species habitat similar to one another (4.6% and 4.5%, respectively), but still greater than losses on federal land.

Since the study covered more than 30 years of data (1986 to 2018), the researchers were also able to observe other residual effects over time, such as the relative impact of protected vs. non-protected lands before and after a species is placed on the ESA or Red List. The authors found evidence that the ESA contributed to habitat protections on federal lands, with species losing less habitat after they were listed than before.

“By zooming out to the national level, the study provided us with a unique opportunity to examine whether certain regulations and jurisdictions were more effective in protecting habitats of endangered species,” said Michael Evans, senior conservation data scientist at the Center for Conservation Innovation at Defenders of Wildlife and co-author of the study. “For example, we found that habitat preservation was linked more closely to federal protected land status and ESA protection, regardless of agency-specific regulations. Regulations for protection are different outside of federal lands, where reporting of environmental impacts is required, but minimization of these impacts may not be required.”

The authors noted that the differences in how conservation laws and protections are applied in different contexts may not ultimately serve the ESA’s intended goal of species preservation. Species not only inhabit federally managed areas, but their ranges can also extend into state and privately-owned land, and even state-owned lands were not as effective as federal lands in protecting species from habitat loss.

Even if a species’ range is contained within federally protected land, that protection can be compromised. “We know from research conducted by other scientists that development surrounding protected areas can reduce the effectiveness of those protections for animals,” said Adam Eichenwald, biology graduate student in the laboratory of professor Michael Reed at Tufts and first author of the study. “Not only that, but global climate change can force species to move, which we worry may eventually result in areas designed to protect species without any of their protected occupants.”

“At a time when the planet faces a looming extinction crisis, we need every tool available to protect species and their habitats,” said Jacob Malcom, director of the Center for Conservation Innovation at Defenders of Wildlife and a co-author on the study.  “This research illustrates the critical importance of America’s federal lands system for conserving wildlife habitat and the urgent need for better protections on other land ownerships.  Biodiversity and the services it provides to society can be conserved through concerted effort and transformative change; protecting habitats must be an essential part of that effort.”