The double-overtime victory over Colby, 102-94, brings the conference title to the Jumbos, and head to NCAAs 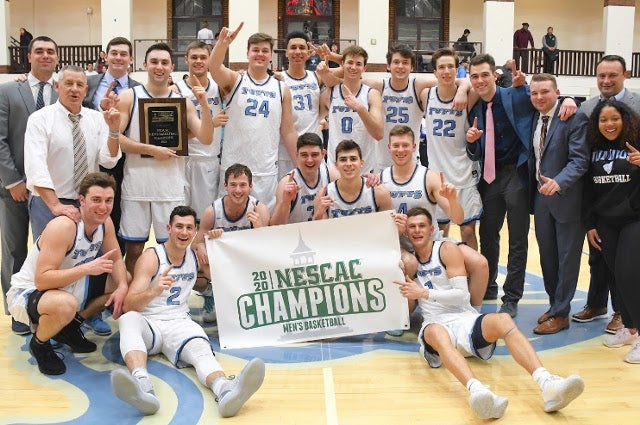 “Colby’s good and they came back on us, but we played like a team and never gave up,” said Bob Sheldon, who is in his thirty-second year as the Jumbo head coach. “To be trailing late in regulation and then again late in the first overtime and come out on top shows you what this team is made of.”

With the score locked at 70 with 1:19 to go in the second period, the Mules got a couple of free throws from Dean Weiner. On the Jumbos end of the court, Rogers made one-of-two at the charity stripe to bring the Jumbos within one, 72-71, with a minute to go.

Colby’s Matt Hanna put the visitors up by three with a couple of free throws with six seconds left.  Sophomore Tyler Aronson brought the ball down the court and handed it off to Savage. Savage dribbled across the court and drained the three to tie the game. Colby got off a shot quickly, but it didn’t come close.

“We have great senior leadership and Eric was tremendous in this game,” Sheldon said. “That was one of the bigger shots ever made in this gym when he tied it in regulation. Then he had another huge three in the first OT and hit the floor for a steal at the end. He’s very focused on keeping his senior season going as long as possible.”

Watch highlights of the Jumbos’ NESCAC championship win over Colby.

The overtime period was tied twice and the two teams traded the lead, and were tied again with just a couple seconds left, send the game into double overtime.

The Jumbos won the tipoff in the second overtime period and Savage opened up scoring with a jumper. Tucker Wallace made one-of-two at the line for the Mules and then a Rogers’ layup put the Jumbos up three. Junior Brennan Morris picked up a key steal and another Rogers’ layup and the free throw after put the Jumbos up six, 91-86, with 1:38 to go. Colby got within five, but the Jumbos made ten of their last twelve free throws in the last 1:10 to pick up the 102-94 win.

“This was a great weekend of basketball at Cousens,” Sheldon said. “The fans really came out and supported us and it made a difference.”

The Mules were led by 23 points from Weiner. Hanna added 21 points and Tyson finished with 19 points and thirteen rebounds.  King collected 12 points and four assists.

The Jumbos will host an NCAA regional at Cousens Gymnasium on March 6 and 7. They will play Western Connecticut State University (20-7) in the first round on March 6. Rensselaer (23-4) and New England College (21-6) play in the other first-round game at the site. The winners will meet in the second round for a chance at advancing to the Sweet 16.