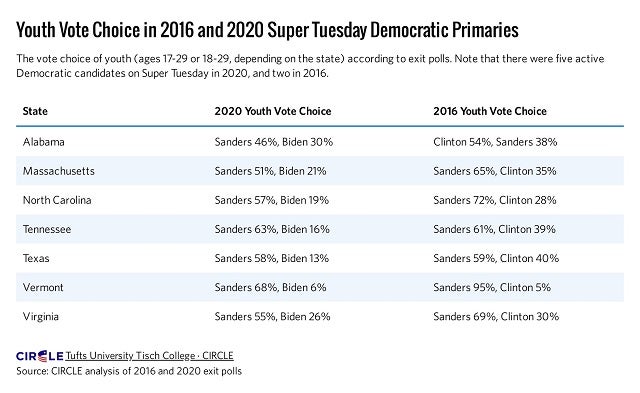 MEDFORD/SOMERVILLE, Mass. (Mar. 4, 2020)—On Super Tuesday, U.S. Sen. Bernie Sanders continued to see the strong youth support he has enjoyed throughout the 2020 Democratic primaries, though the extent of that support varied by state, according to a youth turnout analysis released by researchers from the Center for Information & Research on Civic Learning and Engagement (CIRCLE)—the preeminent, non-partisan research center on youth engagement at Tufts University’s Jonathan M. Tisch College of Civic Life. The researchers also found youth participation was generally higher than comparable presidential election years.

Among the nine Super Tuesday primaries for which preliminary data are available, the general trend is that youth participation was higher than in other years with a competitive primary election in only one political party (2004 and 2012). The youth share of the vote (i.e., the percentage of all voters who were young) varied considerably from state to state, with Minnesota, Massachusetts and North Carolina seeing higher youth representation. For example, in Minnesota, a remarkable 1 in 5 voters were under age 30 (19% youth share), while in Alabama, young people made up only 10% of the overall vote.

“The Super Tuesday results remind us that there is more work to do to engage all young people in the electoral process. Some states, including Minnesota and Massachusetts, saw high youth turnout and engagement, while others like Alabama, Oklahoma and Tennessee lagged,” said Kei Kawashima-Ginsberg, director of Tisch College’s CIRCLE. “As we look ahead to November, we should redouble our efforts to expand youth participation by speaking with and to young people.”

Key findings from the researchers include:

CIRCLE is a nonpartisan, independent, academic research center that studies young people in politics and presents detailed data on young voters in all 50 states. CIRCLE is part of Tufts University’s Jonathan M. Tisch College of Civic Life. Recognizing that young voters are diverse in many ways, CIRCLE will continue to release exclusive polling and analysis throughout the 2020 election cycle. Please visit circle.tufts.edu for the latest data and research. Media outlets should contact Jen McAndrew at jennifer.mcandrew@tufts.edu, or 617 627-2029.