He Brought 5,500 Babies into the World. Then He Started Raising Doctors.

As dean of clinical affairs at Tufts School of Medicine, obstetrician Henry Klapholz knows how to deliver on a good medical education 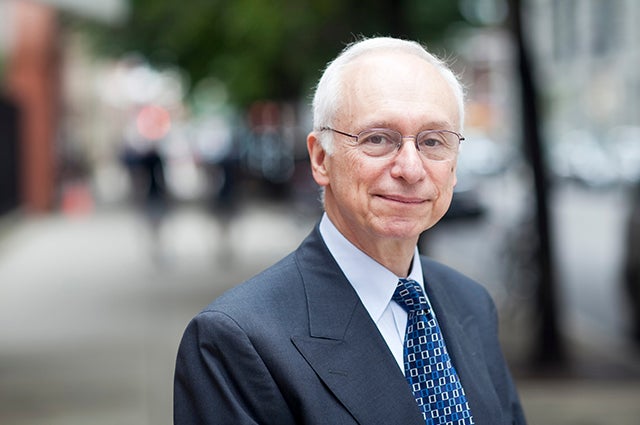 When Henry Klapholz addresses incoming Tufts University School of Medicine students, odds are he’s already met several of them—and their mothers. Klapholz delivered 5,500 babies during forty years as an obstetrician and gynecologist specializing in high-risk pregnancies before coming to the School of Medicine in 2011 as dean of clinical affairs. “Every year, I see one or more of those babies in class,” he said. “Of course, they look a lot different.”

Klapholz has seen a lot during a career that’s also included engineering missiles, serving as an Army major, and heading obstetrics and gynecology at MetroWest Medical Center. He was part of the School of Medicine’s launch of the now nationally ranked Physician Assistant Program and successful effort to make questions about military service standard in medical histories, since trauma experienced during service increases risk of depression and other disorders. Tufts Now spoke with him about his far-ranging career.

Tufts Now: Why did you become a doctor and why did you choose ob/gyn?

Henry Klapholz: I always wanted to be a doctor but couldn’t afford the tuition. My parents fled to America during World War II. My father supported us by knitting sweaters, although he’d been a lawyer in Europe. I studied engineering at a free college in New York, and I got a good job engineering guidance systems for anti-ballistic missiles. But I kept saying to myself, there must be something better than building nuclear weapons to blow up nuclear weapons. When I saved up enough money, I applied to medical school. I chose obstetrics because it brings joy to people. It’s instant gratification.

How did you come to serve in the Army?

I was in medical school during the Vietnam war. Rather than being drafted, I enlisted through the Berry Plan, which allowed students to complete medical training before doing their service. Following my residency, I was assigned to Walter Reed General Hospital as a major. The hospital impressed me. When a foreign diplomat said that he didn’t want me to treat his wife because I was Jewish, the hospital chief told him, ‘Sorry, this is America, and we don’t work that way.’ That made me proud.

Is there a delivery that stands out among the 5,500?

Yes, a nine-pound baby that had implanted in the abdominal cavity. This was before sophisticated ultrasounds, so we had no idea the baby was outside the uterus. All we knew was it was in a transverse position, which required a C-section. When I operated, I was amazed to find the baby just under the abdominal wall, completely healthy.

How has medical school changed?

What is medicine doing wrong?

I don’t like the direction in which doctor-patient relationships are heading. If you ask anybody, they’ll tell you they want a close relationship with their doctor, and for the doctor to make decisions based on the patient’s best interest. But today almost all doctors work for large organizations. If a doctor wants to spend more time with a patient, they can’t. They have a big list of patients to see put together by someone else.

What advice do you give medical school students?

I always tell students the same thing: Know something really well that sets you apart. It’s best for the patient, you’ll always have a job, and there’s less burnout. This doesn’t mean you can’t pursue primary care. Primary care physicians can still develop a particular expertise—for example, in preventive medicine. It’s really good to be really good at something.