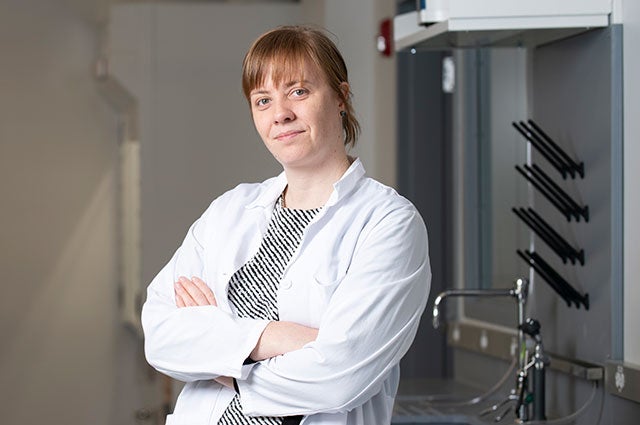 Opioid-use disorder affects two million people in the United States. Although many people with this chronic brain disorder eventually will seek treatment, the vast majority of patients undergoing medical management and psychosocial therapy—some fifty to seventy percent—relapse and take the drugs again at least once.

Now, Cummings School Assistant Professor Fair Vassoler is working with Weinberg Medical Physics, a Maryland-based medical-device incubator, to study a new way to potentially curb the opioid cravings that contribute to relapse. Together, the researchers are testing if a new kind of deep-brain-stimulation can reduce drug-seeking behaviors.

Traditional deep-brain stimulation uses electrodes implanted in the brain to trigger different kinds of neurological activity. The FDA-approved procedure has successfully treated movement disorders, such as Parkinson’s disease, with few serious side effects. While a graduate student researcher at University of Pennsylvania, Vassoler conducted research indicating that the treatment reduced cocaine-seeking behavior in rats, a model of human relapse. This treatment method for human addiction entered clinical trials for misuse of opioids, alcohol, cocaine, and meth in China, Canada, France, and Germany about nine years ago, said Vassoler, who noted that the first U.S. patient was implanted to treat opioid-use disorder at West Virginia University Rockefeller Neuroscience Institute at the end of 2019.

Weinberg Medical Physics has developed a minimally invasive version of deep-brain stimulation that uses an MRI machine to guide magnetic nanoparticles—each smaller than a red blood cell—up through the nasal cavity and into the reward center of the brain. With the new technology, “human patients in recovery for addiction would wear a hat that signals the little particles to wiggle, stimulating neurons that help reduce cravings whenever they recur,” Vassoler said. “We are trying it in our rats in hopes of it becoming commercially available for human patients in recovery.” (The technology has been licensed to a new start-up company that has received investor funding.)

In March 2018, the researchers received a $230,000 seed grant from the National Institute of Health’s National Institute on Drug Abuse. The project’s first experiments in rodents spent a lot of time ensuring that the new technology does not damage the brain. “We made sure the nanoparticles did not cause lesions and tried nanoparticles made from a variety of materials to determine which caused the least immune response from the brain,” Vassoler said. “We have found what we believe to be a good size and material for the nanoparticles.”

Next, the researchers tried the new technology in a rodent model of voluntary opioid intake that simulates real-world drug use. In the rodent study, which featured intravenous self-administration of an opioid, rats could choose if they wanted a dose of oxycodone. Vassoler said this simulates a person choosing to take drugs—or, later, relapsing after a period of no drug exposure. “The technology appeared to decrease rats’ levels of craving to prevent relapse,” Vassoler said. But the initial results, though promising, are still very preliminary. “We need to repeat them at least two more times, and we hope to secure the research funding to continue looking at this.”

The hypothesis for how the technology works is that the nanoparticles press on adjacent neurons in the brain when oscillated, increasing levels of a neurochemical called adenosine. “There’s evidence that mechanical stimulation of neurons increases levels of adenosine,” explained Vassoler, noting that research by another lab working with rodent models of addiction has shown that adenosine appears to reduce drug-seeking behavior.

Vassoler hopes that this is indeed the case and that her project may support a new treatment that helps more people successfully recover from opioid-use disorder. “Withdrawal from opioids is so painful and the cravings are so powerful that too many people end up dying despite their efforts to quit,” she said. “It’s really important that we do all that we can to address this.”