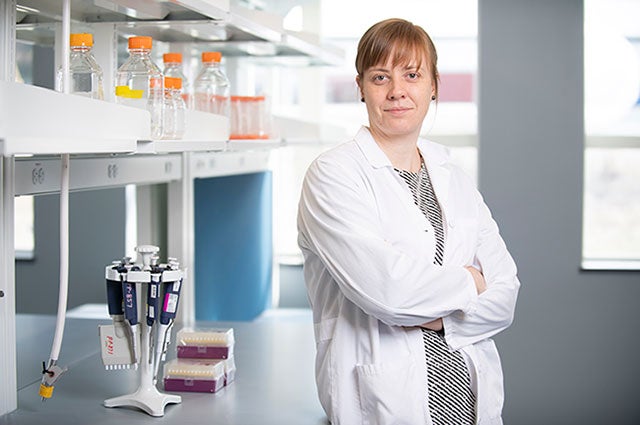 In 2018, more than forty-seven thousand Americans died from an opioid overdose, and ten million misused prescription opioids. The highly addictive drugs have destroyed lives and families, regardless of income level, race, age, or gender.

Fair Vassoler, a neuroscientist at Cummings School of Veterinary Medicine has spent years researching opioid use in rats and the effects the drugs have on the rats’ offspring. We recently sat down with her to discuss what her research can tell us about opioid addiction in humans.

Fair Vassoler: Rats have the same reward system as humans. In the wild, these systems are designed to get an individual to repeat a behavior because they find it pleasurable, like eating and mating. It’s really for survival of the species. Because rats and humans have the same reward system, rats can be great models for human addiction and human substance-use disorder. We have a huge amount of literature already about rats and their responses to drugs of abuse, and their behaviors are very similar to what we see in humans.

We can see escalating behaviors in the rats where they take more and more drugs if you give them more access. We see the same thing in humans. We can see relapse behaviors in rats the same way that we see them in humans—if you take the drug away and then put the rats back in an environment that reminds them of the drug, they’ll start searching for it just the way a human would.

With rats, we can look at what is happening in the brain at that time. We can record data from different parts of the brain and see what changes are happening and relate those changes back to humans.

Your research looked at how opioid addiction affected the rats’ offspring. What did you find?

When the parents were adolescents, they were given injections of opioids for ten days, and then we stopped giving them any more opioids. So it was very brief exposure. We let them grow up to adulthood, then mated them and looked at their offspring to determine if the offspring were more or less likely to take opioids or cocaine.

We found that if the rats’ fathers had been exposed to opioids, then the rats were more likely to take opioids and worked harder to obtain opioids. But they were less likely to take cocaine.

What is the practical application for this research right now? Can any of it translate to humans?

It’s not that we can take the results and say that humans would be the same as rats. Humans are a very tricky species to study because they have so many different environmental experiences that are hard to control for. But I do think our research can suggest which areas are vulnerable, such as how a predisposition to addiction can get passed on from one generation to the next, and different places for intervention.

We have to think about how this widespread exposure to opioids is going to be impacting the next human generation. If we can find the right interventions, we can provide support for people who have had past issues. If we can help them enrich their environment for themselves and for their children, it can really be helpful. Environmental enrichment is another form of epigenetic modification that may be able to reverse the developmental trajectory and contribute to normal healthy neurodevelopment. I’m definitely on the side of compassion, enrichment, and social support, and I think that those things are going to be really important going forward.

Where is your research headed next? What other questions are you hoping to answer?

The research I’m doing now is trying to look at the development from embryo, to prenatal pups, to postnatal day-one pups, and throughout development to see if we can figure out how the offspring rats are developing differently. That could help us understand why they would respond to these two drugs, opioids and cocaine, so differently.

If we can figure out the specific biological mechanisms by which such behaviors are transmitted from one generation to the next, then we can work to intervene medically, and we’ll understand more about how evolutionary biology operates. That’s what will make our research more applicable to humans in the future.

If effects like you describe did leave a child predisposed to addiction, could you reverse that somehow, maybe with nurturing or environment?

What this research can tell us is that our environment can impact our offspring. All the experiences you’re collecting throughout your life are changing your epigenetics, or the way that your offspring are going to develop. For the rats, the only thing that the male donates to the offspring is his sperm. He doesn’t do any fathering. So, there’s something in the sperm that’s changed as a result of the previous drug exposure. We think these are epigenetic modifications.

For a long time, people thought an individual’s genetics were responsible for everything. But even if you have the same genetics, your environmental experiences can change how you react to things and how your offspring are going to react to things. I also think some tendencies are going to be reversible. So just the same way that your own opioid use might change the way your offspring take drugs, if you provide lots of environmental enrichment, for example you read to your child every day, then that could change or mitigate some of the effects of your past opioid use. Environmental enrichment is beneficial for everyone and can be particularly helpful in providing a strong foundation for neurodevelopment of children.

Some people’s brains are going to be more vulnerable to addiction, and it’s a combination of environmental exposures and genetics. It’s not a failure of morality. Understanding that this is not a choice, that it’s a disease, is important.