Celebrating from a distance, medical students learn where they will do their residencies, and say they are more determined than ever 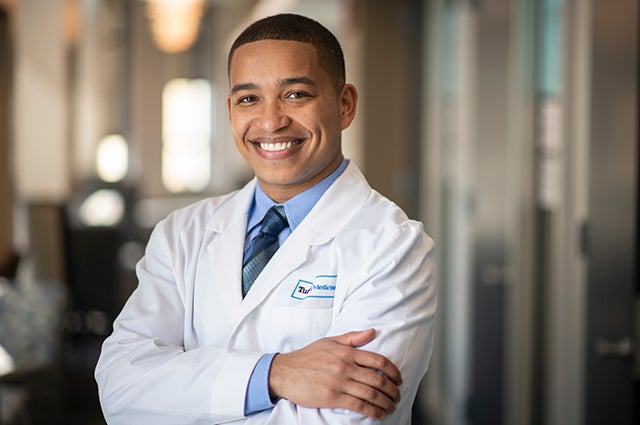 No, it wasn’t the usual crowded party on Harrison Avenue with a podium for speeches and paper envelopes to rip open. But Match Day for the graduating class of MDs at the School of Medicine on March 20 was still a celebration—with virtual shout-outs, real tears of joy, and smiles that lit up the internet. And if anything, what the students have all been working toward was even more palpable.

With COVID-19 precluding the usual festivities on campus, the school quickly looked for ways to mark one of the most anticipated events of med students’ lives—the day they learn where they will do their medical residency.

For each of the 216 students entering residencies, the school crafted online match letters to open to animated confetti and sounds of applause. Student affairs staff created an Instagram account (instagram.com/tuftsmatch2020) with a countdown to Match Day and recruited faculty and alumni to record messages for the class of 2020. They made their “covideos” in home offices, backyards, or wherever they were waiting out the pandemic.

Clinical professor Scott Gilbert shot his video from “deep in social isolation” on a frozen lake, where he was ice fishing. “Today is the result of years of hard work, commitment, and perseverance and you deserve everything that you achieve today,” he said before casting a line.

Students reciprocated by sharing photos and videos of themselves receiving their good news amid balloons, banners, and glasses of champagne. Some of the students set up Zoom video conferencing meetings so they could toast each other.

Anthony Norman of Chelsea, Massachusetts, was camped out at his grandmother’s house with his fiancée and their families—just shy of the ten-person gathering limit. He connected his laptop to the television screen so they could all watch the speech from Amy Kuhlik, dean of student affairs. But when he received his virtual match letter, there was a problem: his mom hadn’t returned from picking up lunch.

“I had to wait almost ten minutes,” he said. “It was agonizing.”

Finally, the moment arrived. He will be doing a general surgery residency at the University of Virginia. He was ecstatic, he said, and despite social distancing rules, there may have been some hugging.

Sure, he missed not being with his classmates on Match Day. But he was with the people who mattered most.

“I’m texting friends as much as possible to share in those celebrations,” he said, “but at the end of the day, my family has been here with me since day one. So it’s definitely great to be able to celebrate with them. I couldn’t have made it to this point without them.”

The coronavirus has left so many things uncertain—Norman’s wedding, for example, which is still scheduled for May 22. Yet he said the pandemic has only reinforced his desire to be a doctor.

“With many of my classmates, we feel this calling to medicine and this desire to always help and be at the forefront,” he said. “We’re sort of up in arms and ready to charge the battlefield.” 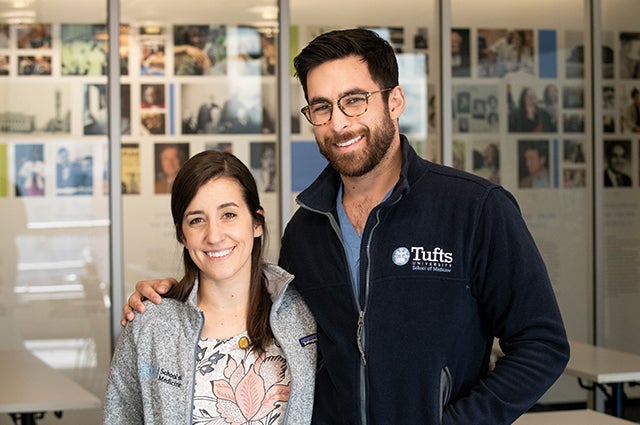 Christina Callas and Sebastian Hernandez were at his parents’ house in California when they heard the good news. Photo by Alonso Nichols

Out on the West Coast, Christina Callas and Sebastian Hernandez were celebrating well before breakfast, having learned that they would both be at UC Davis Medical Center, she in pediatrics and he in emergency medicine.

They are staying in his parents’ house; Callas’ sisters attending via Zoom. “It was pandemonium,” Callas said. “His little brother was dancing around. I teared up a bit, but Sebastian remained calm and collected as usual.”

The pair, who took part in the couples match in hope of having residencies in the same city, were grateful that they had matched in the same hospital and near one of their families. They’re both California natives who met during their first year of medical school thanks to shared interests in soccer and community service.

Despite the obvious stressors, they found joy in continuing on their career path. “We were able to countdown and be excited this week,” she said. “There is a little bit more unknown, for sure. We don’t know what the world will look like in a couple of months when we get to the hospital. But we still feel like this is what we’re meant to do and what we’re supposed to do and what we want to do.” 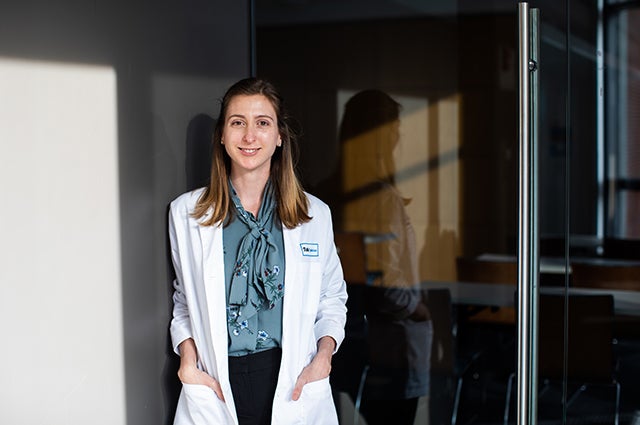 Anna Winston—and her boyfriend, Ryan Poulo—will be making plans to move to Philadelphia for their residencies. Photo by Jake Blecher

Anna Winston agreed. During her med school career, her interests in public and global health propelled her to India, where she helped launch a clinic for patients with chronic obstructive pulmonary disease. And in Namibia, she won a research fellowship to examine treatment for patients living with HIV.

While the coronavirus is scary, she said, the doctor in her is more determined than ever. From her study of HIV, she knows “we never have a way of predicting how the next infectious disease is going to unravel,” yet she is already thinking ahead to what lessons can be learned from this pandemic.

On Friday, she was taking the day to revel in the news that she and her boyfriend, fellow M20 Ryan Poulo, had matched as a couple in Philadelphia. She will be at the Hospital of the University of Pennsylvania for internal medicine; he will be at Thomas Jefferson University for emergency medicine.

Stephanie Cohen, who is from Chicago, spent Match Day in Boston with three classmates. They all met at pre-matriculation. “We have grown so much for the last four years and really wanted some sort of closure,” she said. Family, including her mom, joined them via video conferencing.

Cohen is heading for seven years as a general surgery resident at Beth Israel Deaconess Medical Center, where she rotated on the transplant service in August. “I felt like I may have found my family,” she said.

Shortly after Cohen got the news, Betty Liu, M19, a surgery intern at the hospital, Facetimed her. Ten minutes later, her research mentor, Associate Professor Abhishek Chatterjee, called. “I was humbled that these surgeons were calling me in the midst of a global pandemic,” she said.

“It is a privilege to become a doctor in the time of a crisis,” she said, “because that means we have the opportunity to help.”