In Defense of Online Defenses 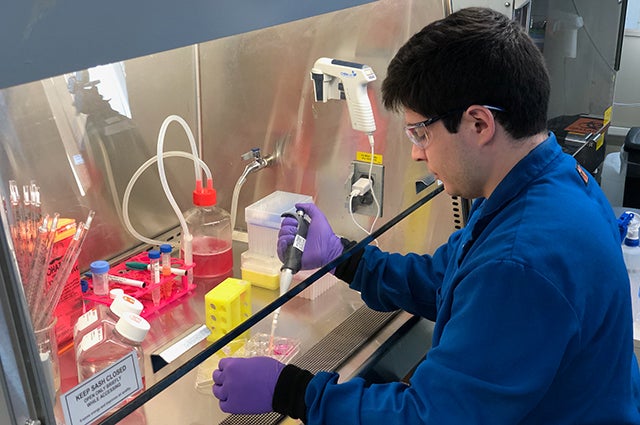 A little more than two weeks ago, Robert Cerulli, A13, M22, GBS22, turned in his thesis on peptide-based inhibitors in cancer-cell signaling. That same day, the Graduate School of Biomedical Sciences (GSBS) sent out a message informing students that because of the coronavirus, all upcoming thesis defenses would have to be completely online. Cerulli’s would be the first.

“At first, I was definitely confused—how would it really work?—and anxious,” he said. He was a little disappointed, too. He has been anticipating this moment since entering the School of Medicine’s MD/PhD program in 2013. You could say he had been working toward it since he first came to Tufts as an undergraduate chemistry major in 2009. He had envisioned proudly presenting his research to his peers in a classroom, maybe even an auditorium. Not from his apartment.

In the end, his defense via WebEx video meeting on March 24 may have been even better than what he originally pictured. 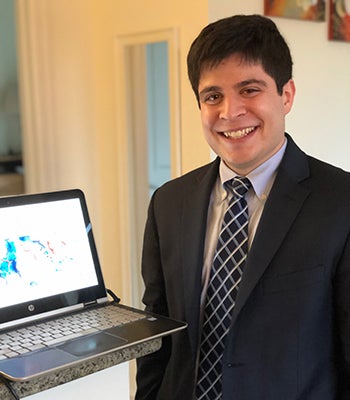 Leading up to the big day, he heard plenty of jokes about the benefits of presenting his thesis from home—like being able to wear pajama bottoms. (For the record, he wore a suit, including trousers.) Dan Jay, GSBS dean, sent an email to the school suggesting they tune in “to support Rob and hear a little science while they were stuck at home,” he said.

The day itself was full of surprises. As Cerulli was logging in and getting his slides ready for his presentation, names started appearing in little windows. Several were family and friends. There were his current lab mates, which was nice, but he was pleasantly surprised to see former lab mates from across the country, too. Faculty, deans—and tons of other GSBS people. Altogether, 109 people were tuning in to see him, about two to three times the number of attendees at a typical defense.

Then the comments started popping up in the chat box. “One by one, they were sending me warm well wishes,” Cerulli said. He had anticipated being a little emotional when it was all over, he said, “but I never expected that I would be getting choked up before the talk.”

The presentation and the questioning from his thesis committee went smoothly and felt exceptionally—well, normal, Cerulli said.

The thing he really expected to miss was the celebration after the defense—the time for handshakes and backslaps from friends and colleagues.

His thesis advisor and lab director, Joshua Kritzer, associate professor of chemistry in the School of Arts & Sciences, had it covered. When the official WebEx was over, he invited Cerulli’s supporters to a more casual Zoom videoconference afterparty. (Kritzer captured a key moment here.) He also arranged for prosecco and cupcakes to be delivered to Cerulli’s home at the right time.

“We could do an actual champagne toast together,” Cerulli said. “Here I was thinking that anything like that wasn’t going to go on. That was an awesome surprise.”

One fellow graduate student had all the current and former lab members record congratulatory statements that she edited into a slide show with music. Ordinarily, Kritzer said, everyone would sign a card or a T-shirt. “This was almost nicer,” he said.

“Rob is an especially kind and generous person and a good mentor,” Kritzer said, explaining that Cerulli trained at least five Tufts undergraduates in his lab who have gone on to careers in science around the country. Because of the online move, Kritzer was able to invite them all.

“They almost all showed up. He was really touched by that. Rob really did make a difference in those undergraduates’ lives. To see them all in one virtual room, he would have never had that.”

As lab director, Kritzer admits seeing all those faces together made him a little emotional, too.

Dean Jay couldn’t help but be proud when more than a hundred people logged on to Cerulli’s presentation. “It was such a moving moment,” he said. “It is a testament to the kindness and support that makes our community special."

Guests who tuned in also got a special treat: a meeting with Felix, Cerulli’s baby boy, who was just shy of four weeks old.

“It’s been a roller coaster few weeks, for sure,” Cerulli said, clearly understating the enormity of finishing a thesis and welcoming a first child during a pandemic. He credits his wife, Shaylagh, with being incredibly supportive.

To the many students across Tufts who are going to defend their theses online this spring, Cerulli says not to worry. “It’s still a very special time,” he said, “and something you’ll definitely remember.”

For a series of related stories about the university’s early response to COVID-19, please visit our retrospective Tufts Remembers March 2020.