A First Look at the Undergraduate Class of 2024

With its largest first-year applicant pool, Tufts offered admission to “some of the most interesting, inspiring, and altruistic students in the world” 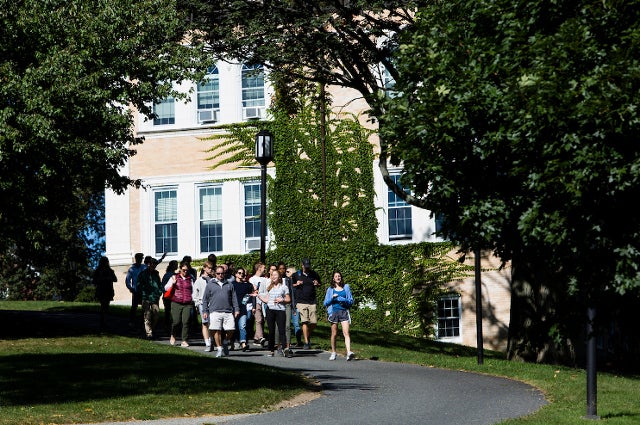 When JT Duck and the Office of Admissions staff are asked to describe Tufts undergraduates, words like “civically engaged” and “intellectually playful” have frequent currency. “That’s who they are,” said Duck, dean of admissions. “Tufts has a knack for attracting some of the most interesting, inspiring, and altruistic students in the world.”

That observation is certainly true for newly admitted Jumbos. Tufts last Thursday wrapped up a highly competitive undergraduate admissions process when it offered admission to 15 percent of 23,127 applicants for the Class of 2024, the university’s largest first-year applicant pool. Tufts saw an increase in applications to each of its three undergraduate programs: the School of Arts and Sciences, the School of Engineering, and the School of the Museum of Fine Arts at Tufts.

“In these extraordinary times, our admissions staff has been humbled and inspired by the stories our applicants shared with us this year, the thoughtful messages we’ve received from past, present, and future Jumbos, and the ways in which this community has rallied together,” he said.

“It has been difficult to only offer admission to a select few members of this outstanding applicant pool. Each student we have admitted brings a unique voice, talent, and perspective to our community.”

While admitted students and their families would traditionally visit the Medford/Somerville and Boston campuses during April’s Jumbo Days, the impact of COVID-19 has mobilized the admissions office to create an online version. The virtual Jumbo Month was developed “to engage newly admitted students and connect them with current students, faculty, and staff to help them make their final decision about where to enroll,” said Duck.

“Just a few weeks ago, we were reading applications in anticipation of meeting these wonderful students in-person at our annual Jumbo Days events,” he said. “While those meetings will now be virtual, we’re just as excited as ever to get to know the Class of 2024 off the page.”

Duck said the admissions office is already looking ahead to the Class of 2025—and beyond.  The coronavirus pandemic is expected to have a profound ripple effect on secondary school students across the country and the world—in addition to remote learning and curtailed spring extracurricular activities, several spring SAT and ACT testing dates have been canceled. Tufts has announced a new test-optional admissions policy for the next three classes, Duck said.

For now, here is a closer look at the composition of the admitted Class of 2024.

Women make up 54 percent of the admitted class, men 44 percent, and two percent identify as genderqueer, non-binary, or preferred not to specify a gender identity. Women account for a slight majority at both the School of Engineering and the School of Arts and Sciences.

Tufts increased enrollment of first-generation college students by 30 percent during the early decision phase of the admissions process. More than 10 percent of all admitted students to the Class of 2024 are the first in their family to attend college. Fifty-five percent attend public high schools.

More than 10 percent of admitted students work with community-based organizations that support students on their paths to college, including SCS Noonan Scholars, Bottom Line, A Better Chance (ABC), Leadership Enterprise for a Diverse America (LEDA), Prep for Prep, and QuestBridge. Tufts enrolled fifteen students through the QuestBridge National College Match program and admitted more than 200 Questies to the Class of 2024.