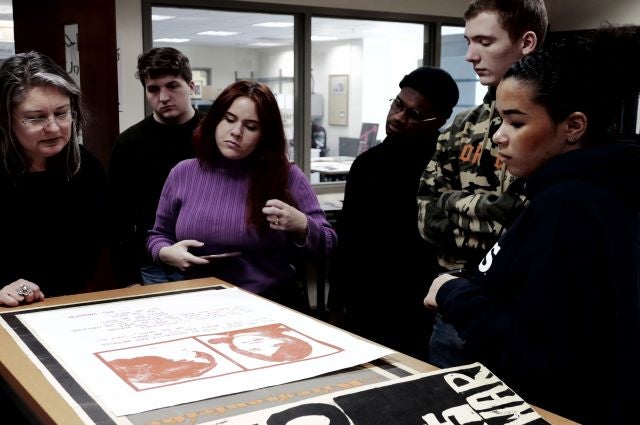 Among some 60 protest posters spread out for viewing, one made an unforgettable impression. In lower-case white letters marching across a black panel, it read: world war III is unique because it will never be mentioned in history books.

To the discerning eye, that startling warning takes meaning not only from the words themselves, but from artistic decisions that heighten their impact. Chantal Zakari, professor of the practice of graphic arts at the School of the Museum of Fine Arts at Tufts (SMFA), helps students understand those aesthetic choices in her studio course, The Graphic Power of Subversive Posters: Socially Engaged Art.

“Do you recognize this font?” she asked a group of undergraduates in January, during a class trip to Digital Collections and Archives (DCA) on the Medford/Somerville campus. “Where have you seen it before? How old do you think this is?”

“It’s definitely a signature of the ’70s,” she agreed, pointing out that the type has the “balloon, bubbly” feel that was ubiquitous in that decade. The font places the poster among many that opposed the Vietnam War. And the typeface accounts for the poster’s “entire aesthetic,” she said. In fact, “It’s really a rejection of aesthetics.” 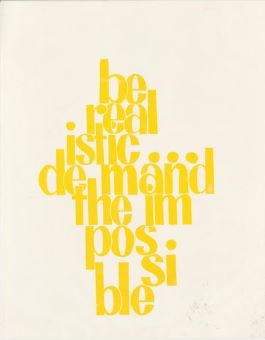 The font used in this poster forces the reader to slow down, Chantal Zakari said. Photo: Courtesy of Digital Collections and Archives

The trip to the university archives is an integral part of Zakari’s course, which considers what it means to be a socially engaged artist. In the class, students examine posters as well as street graphics, printed ephemera, installations, books, and web-based interventions, art “used to activate a public,” as Zakari explains it in her syllabus.

Pamela Hopkins, public services and outreach archivist at DCA, handpicked examples to share from the university’s extensive holdings. In the reading room, she laid out selections from the Ryder Collection. Put together in the early 20th century, it encompasses Civil War and pre-Civil War memorabilia.

She also displayed samples from the roughly 20 posters that are part of the vast World Peace Foundation records. Those materials preserve the legacy of publishing magnet Edwin Ginn, Class of 1862, who in 1910 established the foundation that is now based at The Fletcher School.

More contemporary examples included posters from the Center for Environmental Health and Justice Collection, documenting protests against hazardous waste dumps and their effects on public health, and works from the Metcalf Hall collection, a set of protest posters that were recently discovered in a closet in a Tufts residence hall.

Often these posters are “very much of the ’60s” and they tend to be highly conceptual, Zakari said. Take the case of one with a message in yellow type: Be Realistic Demand the Impossible.

“So this is a good one where the lettering is decorative,” she said. “And one might ask: does it have to be decorative?” The abstract style slows the viewer down because it’s harder to read, she explained, “and when it’s harder to read, you can’t really easily dismiss it. You want to understand it, and so you stay with it longer to decipher the image. If you are in a subway and you are looking at it for a while, it will engage you.”

Nathaniel Coulanges took a closer look at a 1990 poster that riffed off the iconic Godzilla by depicting a tree transformed into a monster called Toxilla. He noticed 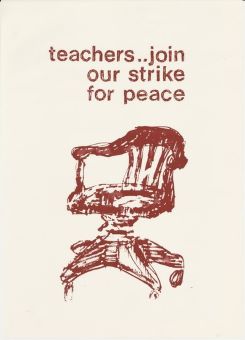 This poster's simple image underscores the urgency of its message, Chantal Zakari said. Photo: Courtesy of Digital Collections and Archives
that the poster’s words played with the meaning of the phrase, “we make a killing.”

“That is usually used in advertising to mean you are doing well in business, which they are, as this toxin is doing well in killing people and making people ill,” he said. “I like how it’s very graphic, kind of comic-like.”

He also appreciated learning about the posters to understand their effect on his own art. “The past informs and influences my work in ways that I might not be aware of,” he said.

Teaching assistant and graduate student Camila Davila said the posters opened her eyes to how artists can “construct revolutionary ideas that can resist time and can speak to another generation.”

Zakari gathered her students around another Metcalf poster that reads “teachers . . join our strike for peace.” The poster features a hand-drawn wooden teacher’s chair; the strokes are loose and rushed.

It could have been a photo, or a more edited drawing, said Zakari. “Instead, you can imagine somebody trying to do this in an hour,” she said. “It has a lot of immediacy,” and wasn’t meant to be realistic or beautiful because its context is urgency.

Turning to student Krezian Frey, who goes by K, she encouraged him to consider the poster as he develops his own signature style: “K, I wanted you to look at this chair because you were talking about making your drawings quick and immediate and rough.”

“That’s really cool,” said Frey, later explaining that the visit to DCA “gives me an example of what I could do.” But he also appreciated how effective the posters were. He said, “These posters made movements that made history.”