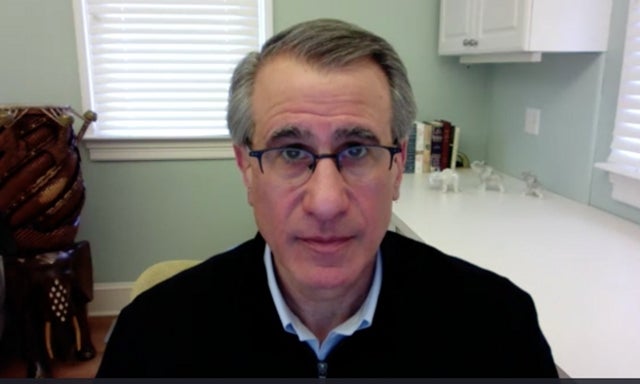 The COVID-19 crisis has forever changed Tufts, President Anthony P. Monaco told the university’s faculty and staff on April 17. “When the pandemic is over, we cannot go back to the way we were. These are uncharted waters for all of us,” he said.

At the same time, Tufts’ core values, its mission, and its people give it the strength to tackle the challenges of a post-pandemic world. “I’m fundamentally optimistic,” Monaco said.

The president addressed faculty and staff via a virtual town hall, discussing the academic and financial challenges facing Tufts as the university grapples with what the coming academic year might look like. He and his senior leadership team also outlined the immediate steps Tufts will take to confront the considerable economic impact of recent events, including instituting a salary and hiring freeze and halting capital projects.

The uncertainty of events, even in the near term, means that the answers to many pressing questions—“Will students be coming to campus for the fall semester?” “Will there be layoffs?”—cannot be answered now, the president and other members of the university’s senior administration said. Along with expressing his “Jumbo pride” in the university’s employees, he promised the administration would strive to be equitable and transparent in its decision-making.

For Tufts, the pandemic and its fallout “does strike at the heart of a residential, student-centered, research university,” Monaco said. Yet, the university is determined to maintain its academic excellence, commitment to civic engagement, and standing as an R1 research institution, Monaco said. (R1 denotes universities with “very high research activity” according to the Carnegie Classification of Institutions of Higher Education.) High-level research and scholarship are “more important now than ever, when our research is needed to tackle such complex challenges.”

Reacting to the onset of the COVID-19 crisis required extraordinary nimbleness on the part of the academically diverse university, which has traditionally relied on a rather broad, decentralized organization among its schools and central administration, Monaco said.

Howard established several working groups to develop guidance on issues including health and wellness; academic, research, and operational continuity; student life; and continuity. In addition, the faculty senate, and the deans and executive associate deans from each of the schools advised on university-wide decisions. Logistics and planning were assisted by the Fletcher School’s Military Fellows, a team of military personnel who have been studying in a civilian capacity through the International Security Studies Program.

The presence of the Fletcher Fellows was particularly fortunate, Monaco said: “They had the right expertise at the right time. They stepped up to help with logistics and command structure, to change a horizontal structure into a more vertical, efficient structure at this time.”

They inspired the reorganization of the Medford-Somerville campus into zones, to accommodate the various activities now taking place, such as housing for students who needed to remain in Massachusetts, and housing for police and firefighters, medical personnel, and recovering COVID-19 patients, organized in collaboration with two of the university’s host communities, Medford and Somerville, as well as with Tufts Medical Center and Cambridge Health Alliance.

All major revenue sources for the university have been affected by the COVID-19 emergency, including tuition, room and board payments, funded research, and the dental and veterinary clinics. There was a drop in the value of the endowment as the stock market collapsed, and a decline in fundraising is likely as those who have generously supported the university have taken financial hits of their own. In addition, there is the expectation that the need for student financial aid will increase for the next academic year, and that health-care costs for employees will rise.

As outlined in a memo to faculty and staff earlier in the week, the steps the university is taking at present include, in addition to the salary and hiring freeze, a suspension on discretionary spending, such as travel, food, and conferences. While there is an indefinite hold on capital projects, buildings in the advanced stages of construction, like the Cummings Center on the Medford-Somerville campus, will continue when local authorities allow work to resume.

In addition to his presentation of what might await Tufts’ campuses over the next several months, Monaco stressed the university has an important role to play as a resource for its host communities and healthcare partners, and as a source of guidance and solutions to the world at large.

Speaking directly to the audience logged into the virtual event, Monaco said, “We look after and care for our faculty and staff, and think about the university’s long-term future and health.”

“Our key commitment to you, the key people who make this place work and bring it its excellence, is that our decision-making will be equitable and open and transparent at all times,” Monaco said.