Considered one of the most influential women in institutional investing, she “always put the university first” 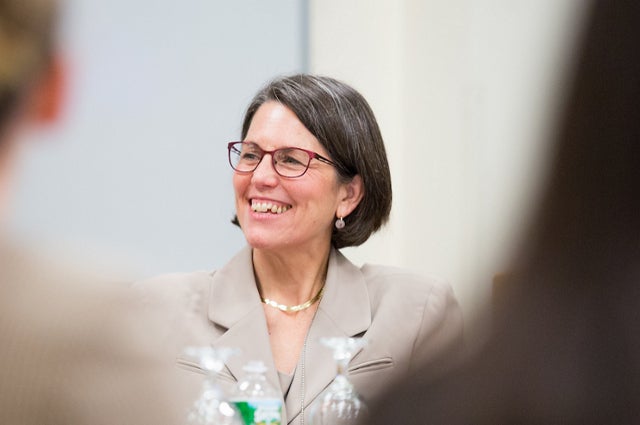 Sally Dungan, who served since 2002 as Tufts’ first and only chief investment officer, died of cancer on April 12.

Dungan is credited with establishing Tufts’ Investment Office, which manages the university’s endowment.

“Sally literally grew the office from scratch, to create an incredibly highly functioning, collegial enterprise,” said Steven Galbraith, A85, trustee emeritus and chair of the investment committee of the Board of Trustees. “She took immense pride in the quality and integrity of her team—and their devotion to the university.”

“Sally Dungan brought to the management of Tufts’ investments a true sense of mission, as well as consummate professionalism, always keeping in mind the role of our endowment to support academic excellence not just today but for generations to come,” said President Anthony Monaco. “She was deeply respected by our trustees and her administrative colleagues as well as by the team she built and mentored, and we will miss her as both a colleague and a member of our community.”

For Dungan, a strong advocate for education and mentorship, building a world-class investment team meant not only hiring experienced professionals, but creating a pipeline for recruiting analysts from among the university’s alumni as a way to encourage students to explore working in the field of investment management.

“She built a very robust and highly successful young analyst program, which draws Tufts graduates and puts them through a three-year training program,” said Tryfan Evans, director of investments, who reported to Dungan for fifteen years. “The way we’ve developed that program over time reflects Sally’s desire to take care of her employees and aid in their development and maturation.”

“She really enjoyed working with the young analysts,” noted David Hohmann, director of administration and risk, and a longtime colleague and friend. “She did all the recruiting for who would be hired into the program, building that relationship and that connection into the Tufts community. Historically, we hadn’t had Tufts alums in the office. She wanted to establish that connection to the university within the office. If you look at other schools, everyone follows a similar program now. Sally was instrumental in building some of these approaches.”

In addition to setting up the infrastructure for the investment office, Dungan successfully partnered with others to create policies and procedures for the oversight and management of Tufts’ investments.

Recently, Dungan had focused on helping University Advancement communicate the status and importance of the endowment so that investors would feel confident knowing their gifts would be well invested and managed on behalf of the university. “She really took to heart the importance of protecting the investment and getting the very best return for Tufts. She always had great honesty and integrity in everything that she did,” Campbell said.

Galbraith echoed these sentiments. “Sally understood that every dollar mattered. Further, she really got the concept of being a fiduciary. We talked constantly about the fact that donor capital goes where it is well treated. She wanted to make sure any donor would feel confident and good about giving us their hard-earned money. And through all this, there was a kindness and thoughtfulness that is really unusual in the investment business.”

Listed among Trusted Insight’s Top 30 Women Chief Investment Officers, Dungan was considered one of the most influential women in institutional investing. Prior to joining Tufts, she served as the director of pension fund management for Siemens Corporation and the senior investment officer of public markets of the Pension Reserves Investment Management Board of the Commonwealth of Massachusetts.

She served on the boards of several public and private institutions, including the Eaglebrook School in western Massachusetts where her sons Joseph Henry and Bud (Samuel) Henry, A17, attended school. Earlier in her career, she worked for Lehman Brothers and other firms in the securities industry. Dungan held a B.A. in French literature from Pomona College and an M.A. in intercultural communication from the Monterey Institute of International Studies.

Colleagues universally praised Dungan’s calm, direct demeanor, her intellectual curiosity, and strength of character. “One of the things that is really distinctive about the endowment management community is people’s commitment to doing this for the benefit of institutions that have a profound impact on a broad range of stakeholders,” explained Evans. “Sally, more than anyone, did it for those reasons. What made her feel good about producing our performance was that it meant the university could afford more financial aid, build new academic programs, and so forth.”

Dungan’s warmth, intelligence, and deep sense of community have left an indelible mark on the investment office and the university at large. “Tufts was Sally’s client, and we were all fiduciaries in the office,” said Hohmann. “There were a lot of decisions we made over the years, and she always put the university first in her decision-making. The ethics she imparted to the investment office will firmly remain intact. I think Sally has instilled that in everybody.”

Sally Dungan's family requests donations be made in her honor to the American Kidney Fund.

Ronee Saroff can be reached at ronee.saroff@tufts.edu.