How COVID-19 Affects Farmers and the Food Supply Chain

COVID-19 has highlighted weaknesses and inequities in America’s food supply system, as well as the need to fix them

Empty shelves lining supermarkets, farmers dumping milk and abandoning fields of crops, restaurants laying off staff—the American food landscape has changed dramatically in just a month, thanks to stay-at-home advisories and social distancing in the age of COVID-19.

But how is the food supply chain and its workers affected? What foods are now less available to which people, and what can we expect going forward?

We don’t yet have all the answers, according to Timothy Griffin, William Masters, and Jennifer Hashley of Tufts University’s Friedman School of Nutrition Science and Policy. The COVID-19 crisis is still unfolding, consumers and food system players are still adjusting, and the growing season in many places has yet to hit full swing.

But COVID-19 has certainly called attention to the weaknesses and inequities of our food system—and to the need, and the opportunity, to address them, the three experts agreed.

A change of feeding grounds

We can start by recognizing the fundamental shift in the way Americans eat, said professor Tim Griffin, division chair of Agriculture, Food, and Environment at the Friedman School, whose classes cover agricultural science and policy and the food system. “Before, roughly half the food spending in the U.S. was what we call away from home—restaurants, the cafe near work, those types of venues,” Griffin said. “That number is a lot smaller now, which means people are having to buy food and make it at home.”

Instead of 50/50, the split is more like 90/10 at the moment, Griffin estimated. “And the system is trying to react to that, because now the demand is coming from a different direction—now it’s coming largely through conventional grocery stores,” he said.

Grocery stores reacted fairly quickly, according to Griffin—after initial shortages of goods like chicken and pasta, restocking is now keeping pace with demand in most cases. Professor William Masters, who teaches food economics at the Friedman School, said that reflects a strength of the system.

“Our food supply is remarkably resilient precisely because our sources of food are geographically dispersed. We haven’t been reliant on food from only one place,” Masters said. “Our food system is not like a chain—it’s like a mesh. We can have failings at one place, but the rest of the network fills it in. The risk is when a whole category of activity fails, such as simultaneous outbreaks at meatpacking plants in different states, or border closures and outbreaks that stop migrant workers from harvesting fruits and vegetables at many locations.”

The biggest and most important sector affected by this crisis is the food service industry, Masters pointed out, accounting for a majority of the jobs lost to date. Some thirteen million food service and hospitality jobs are at risk, as customers stay away from office cafeterias and university dining halls, restaurants and cafes, many of which may never reopen. “They’re trying to keep workers employed and to be part of the solution and make sure people have food,” Griffin said. “But sales are abysmal, and a lot of restaurants are in crisis mode.”

As restaurants and institutions shut down, companies upstream in the food supply system, such as meat packing and dairy processing plants, have struggled to switch from bulk delivery for food service use into the retail grocery sector. As consumer incomes fall, farmers have seen dramatic declines in prices received for livestock and animal feed, while commodity prices for basic staples like wheat have fallen less.

“This is the largest loss of income in human history, in terms of a single event with one identifiable cause putting a sudden stop to physical interactions,” Masters said. And as with other kinds of crises, it’s hitting hardest among those with the least ability to bounce back. “The lost jobs are disproportionately in food and other retail services that have become the main employers for people without a college degree,” Masters said. “It’s precisely the vulnerable and most at-risk people who are most hurt by this disease, both directly in terms of exposure and severity of illness, and also indirectly through loss of income.”

Uncertainty and opportunity for small farmers 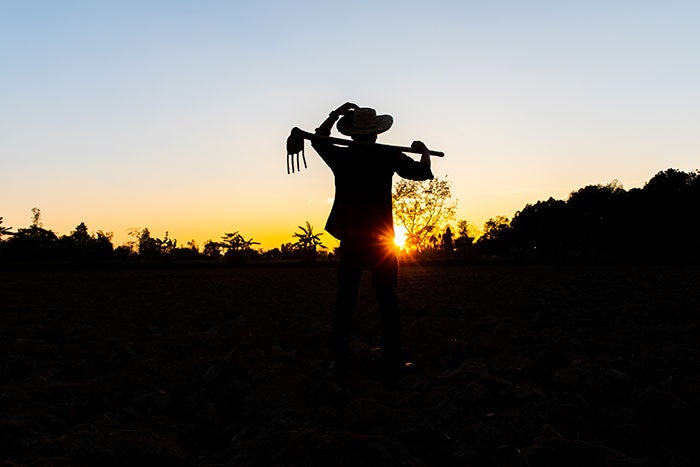 “People need food and they need farmers,” said Jennifer Hashley of Tufts University’s Friedman School of Nutrition Science and Policy. “We’re telling farmers to get on the ground and grow.” Photo: Ingimage

“Farmers with a lot of storage crops, and things like value-added dairy products—like yogurt and cheese—that they can produce year-round, if they have the opportunity to sell directly to consumers, are seeing a huge increase in demand,” Hashley said, noting that Codman Community Farm’s own frozen meats (where Hashley and her husband, Pete Lowy operate a pasture-based livestock operation outside of Boston) are selling out—unheard of this early in the year. “But all this is really challenging to those who don’t have the technological savvy or delivery infrastructure to go from dropping multiple boxes and pallets of food off at institutions, to selling to one consumer at a time.”

Farmers are hesitating about whether they should start planting and how much, Hashley said. Will interest in local and regional food climb now that people are cooking more at home and seeking alternatives to overrun grocery stores, and should farmers try to ride that wave? Or will people come out of social distancing and go straight back to their previous habits of eating out? There are no answers yet, Hashley said, but one thing is for sure. “People need food and they need farmers,” she said. “We’re telling farmers to get on the ground and grow.”

Many farmers are making forays into home delivery, considering contactless delivery and drive-by pick-up options for individual buyers, and looking into online ordering and collaborative delivery models, in which many small producers aggregate their products and distribute them together, according to Hashley. Additionally, farmers’ markets have been deemed essential businesses in Massachusetts and other states, Hashley said, and will be another channel to get produce where it’s needed—though these markets will have to open with strict social distancing restrictions and may look very different.

Hashley urged people to support their local producers by investing in community supported agriculture (CSA) shares. “Small local and regional farms maintain biodiversity and soil health. We’re going to need that to withstand future shocks from climate change, pandemics, and everything else,” Hashley said. “If we continue to move toward a globalized, industrialized food system that’s prone to interruptions when this kind of thing happens, that’s not sustainable in the long term. A lot of people are now trying to figure out how we emerge from this crisis and build from this in a way that honors and supports local and regional producers.”

As we move into the growing season, we’ll get a better picture of how social distancing affects consumers’ behavior and how food system players respond to the shift in demand, according to Griffin. He predicted that crops with mechanized production, like corn, tomatoes, and some other fruits and vegetables, will continue to be widely available. But crops that rely on human labor, like strawberries, will be more subject to disruption.

With farm laborers getting sick or fearing to work in close quarters with others, supplies of these crops could dwindle, which could cause prices to rise. It’s a troubling possibility, according to Griffin. “Those are the things we think of as being really important in a nutritious diet,” he said. “You want to have those foods available even if it’s a really stressful time and people are getting sick.” We are also seeing problem accelerate in the livestock sector, especially at the processing plants, he added, which could lead to meat shortages and price bumps down the road.

It’s hard to predict how our food system will continue to react, Griffin said. But one thing is for sure—the conversation needs to shift soon from the weaknesses of the food system to the road forward. “Everyone is in crisis mode, but at some point, we’re going to have to talk about solutions,” Griffin said. “The goal at this point is how to make sure everyone and especially the most vulnerable populations have access to healthy food.”

The Cost of a Healthy Diet

Why Are Gas Prices So High?