Food Insecurity in the Age of COVID-19

The challenges of accessing food are getting steeper for many during the pandemic, say experts at the Friedman School—but there’s no cause for panic 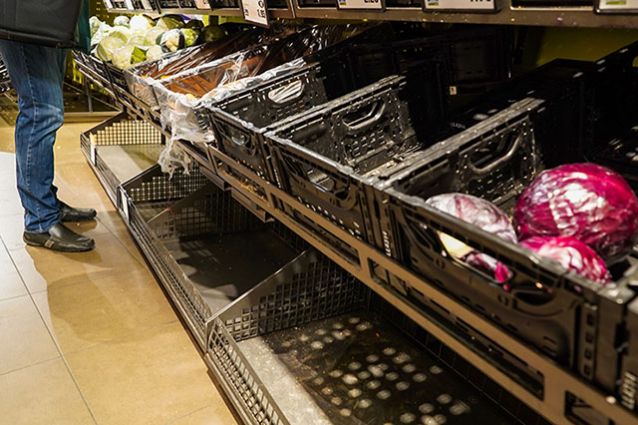 Lines at the grocery store. Empty shelves. Delivery windows that seem impossible to snag. Plus, job loss that shrinks household food budgets. COVID-19 has caused disruption throughout the U.S. food system, introducing some families to food insecurity for the first time, and putting new strains on those already struggling with it.

Parke Wilde, a professor at the Friedman School of Nutrition Science and Policy, is a food economist who studies the Supplemental Nutrition Assistance Program (SNAP) program as well as economic issues that affect low-income Americans. Erin Hennessy is an assistant professor at the Friedman School within the Division of Nutrition Communications and Behavior Change. Her work focuses on childhood nutrition and physical activity. Tufts Now talked to them about how food insecurity is changing as the pandemic evolves, and how our safety nets and we as individuals can adapt.

Food delivery workers and other gig economy workers are being subjected to even more income disruption and food insecurity. “Currently, we have an unjust food system. Many of the people who work hardest in the food system get paid the least,” Wilde said. “As the economy goes into a substantial recession, our society will have to figure out: What type of social contract do we have to make sure that people don’t go hungry in hard times? Social challenges that we faced are going to become more apparent.”

These include labor issues facing food delivery drivers and other such gig workers. “Some of the leading delivery services such as Instacart are currently facing organizing demands and labor demands. Having services like that honestly acknowledge the people who work as employees and give them full-time positions with reasonable benefits at reasonable wages is going to be an essential change as those services become a large part of the food retail environment,” Wilde said.

Many members of the middle-class are experiencing elements of food insecurity for the first time. Nowadays, almost all shoppers have found some products to be unavailable, such as a favorite brand of peanut butter. Special Supplemental Nutrition Program for Women, Infants, and Children (WIC) recipients face this regularly, Hennessy said.

“For all families, food availability has become a significant problem. I think a lot of people don’t realize that when you do enroll in a program like WIC, there are specific foods you need to purchase,” Hennessy said. “Maybe you can’t find the brands that you normally want, but there are people who are already restricted and able to buy certain brands as it is.”

The crisis will change how the broader population perceives food insecurity, suggested Hennessy—but she urged grocery shoppers to leave WIC-specific brands for the intended recipients.

Safety net programs are poised to expand and improve. Much about COVID-19 is up in the air, but Wilde said that programs such as SNAP, the nation’s largest anti-hunger program, are designed to adapt. SNAP enables low-income people to use EBT cards, similar to debit cards, to buy groceries.

“The major programs like SNAP, the national school lunch program, and the school breakfast program are mandatory, or entitlement, programs, which means that they can respond in scale without any new authorization needed from Congress. If more people are eligible for SNAP benefits, the program budget expands,” he explained.

In fact, look for expanded online access to SNAP. The new Families First Coronavirus Response Act (FFCRA) eliminated certain restrictions, such as a three-month time limit on benefits for childless adults over 50. There are also SNAP pilots for online grocery ordering in several states, offering a new way to obtain food, Wilde said.

“It used to be that you didn’t want SNAP benefits to go to delivery services because they charged extra fees. I think those days are gone. Delivery services are now a major mass market. They’ve got an essential role as an alternative to in-person shopping, and that’s likely to affect SNAP’s integration with it,” Wilde said.

As for WIC, which serves 50 percent of infants in the United States, Hennessy noted a movement toward enrolling recipients remotely instead of in person. It will also soon offer more forms of online assistance--in a well-timed twist, Hennessy and several colleagues, including Wilde, received an $8.5 million award this fall to launch the integration of telehealth strategies into the program, folding in remote breastfeeding and counseling support.

It’s clearer now than ever before that feeding programs must become more accessible. Universal school meal programs that don’t discriminate based on household income, such as those in Boston and Los Angeles, show benefits for all kids, Hennessy said. As an increasing number of families become food insecure due to pandemic-induced job loss, enabling access to reliable sources of food will be essential. “We need to do as much as we can to create a system where it’s not so much a process to feed children well,” she said.

Part of this is ensuring that those meals are nutritious, pivoting from addressing hunger with high-quantity foods and focusing on quality. “School meals programs were founded on a platform that children were hungry, and we needed to feed them. Hunger is still a significant issue, but we’ve evolved into a problem of obesity. We should make sure we have equity in food access, and all children should have the highest-quality food,” Hennessy said.

In the meantime, many school districts have continued their school meal programs in innovative ways, such as by delivering food directly to families’ homes via school bus. Others are offering several days’ worth of meals at one pick-up location, Hennessy said. Delivery methods, provisions, and accessibility are decided by each school district.

“It’s a lot of coordination on the part of local school districts, as they know families’ needs best. Now there needs to be conversations on how to continue and expand programs to feed nutritious meals to children over the summer,” she said.

Despite empty shelves, there is no threat of widespread food supply shortages—as long as we stay calm. “Even though this crisis is miserable news, both the food system and the nutrition programs were already prepared to be adaptable,” Wilde said.

For example, this month several major beef and pork processing facilities have had serious coronavirus outbreaks. Twenty worker deaths have been reported, and production may have temporarily fallen by up to 40 percent. Agricultural economists report that beef and pork prices may increase for a time, and the federal government has issued an executive order seeking to keep processing facilities open, he noted—but it’s important to remember that production shortfalls make sense in this context, and that price increases will equip producers to eventually ramp the supply back up while protecting workers.

“The U.S. food supply ordinarily provides more than enough protein to meet dietary requirements, and the federal government needs to consider the safety of workers when taking steps to keep plants open,” Wilde said. “We should think twice before sacrificing the lives of workers to maintain current levels of beef and pork intake.”

As we saw during the Great Depression, shutting down international trade during major economic crises makes challenges worse by preventing shipments from places that have particular foods to places that need them, he said. Instead, we need to keep our channels open.

“The nature of this crisis requires limitations on travel and international in-person engagement already. This makes it seem natural to shut off imports or exports,” Wilde said. “But if there’s a global health crisis, and it causes partial impairment in the food system in some locations for some food commodities during an outbreak or surge, the whole system is more resilient if we’re trading with each other to compensate for temporary shortfalls.”