It is the first urban university in Mass. to receive the certification from Bee Campus USA 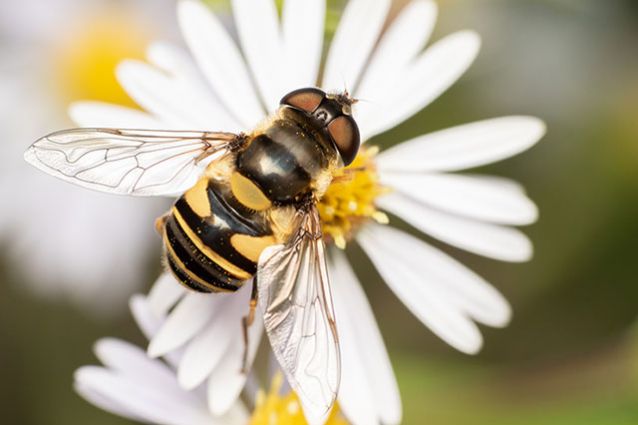 Tufts University’s Medford/Somerville campus is friendly to bees and other pollinators, and it has the certification to prove it. It’s the first urban campus in Massachusetts to be certified as part of the Bee Campus USA program.

Bee Campus USA, with its sister program Bee City USA, works to “emphasize the increasing importance of large communities, such as cities and universities, toward supporting insect pollinators,” said Nicholas Dorian, a third-year PhD student in the Department of Biology, who studies bees in the Crone Lab with Rachael Bonoan, a post-doctoral researcher.

“It's really important to set a precedent here for urban areas as a site for possible conservation,” Bonoan said. “Most people think about agriculture, or wild areas like fields or nature preserves. But cities create stepping stones to connect those nature preserves or those agricultural sites.”

Dorian and Bonoan are part of the Tufts Pollinator Initiative (TPI), which has goals that align with the mission of Bee Campus USA: Generate outreach, extend education, and take on-the-ground measures to promote pollinator health.

Such measures include the three pollinator gardens planted around the Medford/Somerville campus—outside 524 Boston Avenue, another outside Tisch Library, and the newest garden outside Barnum Hall—which are all pesticide-free and feature native plants to attract bees, butterflies and other pollinators, Dorian said.

“These perennial plants are native species that have lived here for thousands of years and these are what local pollinators are used to. Once they're placed in the ground, they don't need a ton of care year after year,” he said. During this time of social distancing, Dorian and others water and weed the gardens on a schedule, so only one person is there at a time.

The goal is to have the gardens bloom throughout the year, from the beginning of May through the first frost of fall. The Tufts gardens use eighteen or twenty different plants so something is always flowering.

Bees as a teaching tool

But it’s not all about pretty gardens. TPI prioritizes outreach and education, whether through teaching classes at Tufts, creating workshops for local schools, holding lecture series, or organizing community events.

For example, they recently held a film screening of a documentary called The Pollinators for members of the Tufts community, as well as the Medford and Somerville community. The director of the documentary was there, said Bonoan, and he introduced the film.

More recently, she said, Dorian and another TPI member created a virtual elementary school program for helping pollinators. They met with a class via video call and talked about the different types of pollinators and what plants can help support them. The kids had to design their own pollinator gardens and imagine what they might look like in all four seasons of the year.

Imagining a garden is a good activity idea for parents stuck at home with young kids during COVID-19 circumstances. Bonoan has two more: First, if you’re gardening, TPI has a planting guide they hope will empower people to go out into their back yard and choose pollinator-friendly plants in their gardens. And second, she suggested taking a moment to sit down and watch bees in a flower patch. She insisted they won’t even notice you.

But what about fear of bees?

A strong dislike or fear of bees and other flying, stinging insects is common, Dorian said. But he had three points that might help you rethink bees and bee stings:

Dorian said to take a deep breath and try not to be nervous. Besides, Bonoan said, watching bees do their work is quite meditative.

“It's so much fun to watch as they go from flower to flower, especially if they're collecting pollen, because they carry pollen on specialized hairs on their back legs,” she said. “The pollen pellets build up, and different pollen has different colors. Some people call them pollen pants.”

Just don’t let the bees catch you making fun of their tiny trousers.