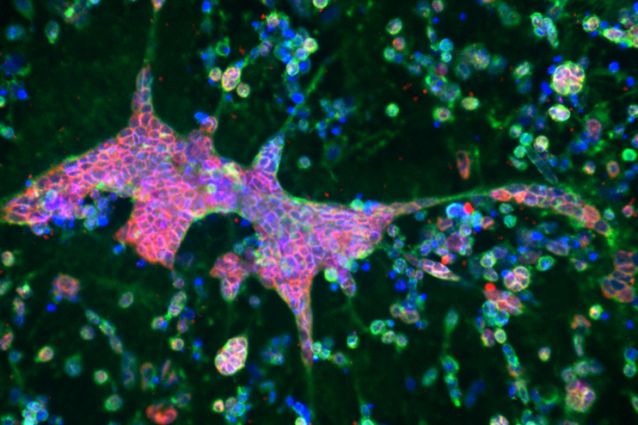 MEDFORD/SOMERVILLE (May 6, 2020)—Engineers and scientists led by Tufts University used a three-dimensional (3D) human tissue culture model mimicking the components and conditions in the brain to demonstrate a possible causal relationship between sporadic Alzheimer’s disease and herpes simplex virus I infection (HSV-1). Reported today in Science Advances, the model will allow for further studies into the causes and possible treatments of this devastating neurodegenerative condition.

After infecting neurons in the bioengineered brain model with HSV-1, the researchers observed formation of amyloid plaques, neuronal loss, neuroinflammation and diminished neural network functionality, all typical features of Alzheimer’s disease. Treatment of the brain tissue models with the antiviral drug valacyclovir resulted in reduced plaque formation and other markers of the disease.

Studies by other researchers have implicated pathogens as environmental agents possibly causing the development of Alzheimer’s disease, with a number of studies pointing to HSV-1.

“Our brain tissue model allowed us to take a closer look at the potential causal relationship between herpes and Alzheimer’s disease, and the results were intriquing,” said David Kaplan, Stern Family Professor of Engineering and chair of the Department of Biomedical Engineering at Tufts’ School of Engineering. “After just 3 days of herpes infection, we saw large and dense plaque formations of beta amyloid protein, as well as increased expression of some of the enzymes responsible for generating the plaques. We observed neuron loss, neuroinflammation and depressed signaling between neurons – everything we observe in patients. Never before have so many facets of the disease been replicated in vitro.”

The researchers found that 40 Alzheimer’s-associated genes were over-expressed in the HSV-1 infected brain tissue constructs compared to non-infected tissue. Prominent among them were genes coding for the enzymes cathepsin G and BACE2, both known to be associated with Alzheimer’s disease and involved in the production of beta amyloid peptides found in plaques. Some of these overexpressed gene products observed in the tissue model could become targets for future drug candidates.

Valacyclovir, which mitigated Alzheimer’s disease-like features in the brain tissue model, is an FDA approved anti-viral medication used to treat herpes infections. The drug also reduced expression back to pre-infection levels of several molecules and enzymes associated with Alzheimer’s disease, such as presenilin-1. The tissue model is set up to facilitate large scale screening of therapeutic or preventive drug candidates that target the earliest onset of this complex and devastating disease.

The 3D construct consists of a 6mm wide donut-shaped, sponge-like material made up of silk protein and collagen and populated with normal neural stem cells that are then guided to differentiate into neurons. The “donut ring” fosters the growth of neurons with the cell bodies situated in the silk-collagen donut, while extending axons into the “donut hole,” making neural connections and mimicking both the grey matter and white matter of the brain, respectively. Researchers not only can observe physical and biological changes in the neurons in real time using imaging methods but also can monitor electrical activity and integrity of the communication networks between the cells.

The model is particularly well suited for studying the origins of diseases. Most other existing in vitro models make use of cells from patients with early-onset Alzheimer’s disease, which accounts for only 1 to 6 percent of patients, cells derived from tumors, or induced to overexpress factors that push them into a disease state.

However, the genetic anomalies of these cells do not necessarily represent what happens in sporadic disease, which occurs without genetic inheritance and from as yet unknown causes in 95 percent of cases. These patients start with presumably normal brain tissue, with some likely age-related risk factors. Environmental conditions are suspected of playing a more significant role in triggering the cascade of molecular reactions leading to the onset of disease. The model used in this study starts with genetically normal cells, allowing for a clearer examination of environmental factors potentially leading to disease.

Other authors contributing to the study include Nicolas Rouleau and Rachael Parker, both post-doctoral scholars at the Tufts University School of Engineering; Katherine Walsh, undergraduate in biology at Tufts University School of Arts & Sciences; and Lee Gehrke, Hermann von Helmholtz Professor, Institute for Medical Engineering & Science, Massachusetts Institute of Technology, and professor of microbiology and immunobiology, and health, science and technology at Harvard Medical School.

The authors declare that they have no competing interests with regard to research or materials used in this study.