A new comedy series shot in part on the Tufts Medford-Somerville campus is drawing timely attention to the issue of ageism. Tufts audiences may also want to watch it for the locations, which include Jackson Gym and a College Avenue bus stop, and for cameo appearances by professors and students.

Jennifer Burton, a professor of the practice in the Department of Theatre, Dance, and Performance Studies at Tufts, co-created Old Guy, which is based on her father’s experiences. A retired professor, he became an actor late in life and discovered that many roles for a man his age reflected narrow stereotypes.

Burton’s screenwriter mother nudged her five daughters, who together run the Los Angeles-based Five Sisters Productions, to take up the topic. Both parents—and several Tufts alumni and professors—star in the six episodes, which were filmed in 2013 and run roughly four minutes each. The series is available on Vimeo, YouTube, Facebook, and Instagram.

Tufts Now recently spoke with Burton about ageism, her work with students, and releasing a new series during a pandemic.

Tufts Now: Old Guy debuted in April, during a public health crisis. What’s that been like?

Burton: It’s been very timely, and not without intent to be so. We saw a rise of ageist narratives in the national discussion, and we felt it was important to finish this project and get it out into the public, to raise awareness and discussion about how ageism is playing a part in our policies and conceptions about older people. Ageism has been a difficult issue for many years, but it hasn’t really crossed over into the public consciousness. With the coronavirus, it has become clear how ageism shapes people’s behavior and thoughts. It’s having such important consequences that it was exactly the time to release this series.

The series is based on your father’s experiences. How did he react to ageist roles?

My dad was very lucky; he didn’t have to take these parts, so he turned down a lot of them. That’s not the case with many actors; they need to work. My mother went to film school in her 50s, when my dad was in his 60s. It took them to Los Angeles, so my parents had a real adventure. And that comes through in the series also, because they play the married couple in it: You can decide that you want to do something new, and have adventures, at any age.

Why was this project a good fit for student involvement? 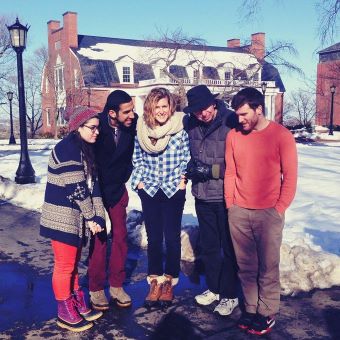 Roger Burton (second from right) takes a break between scenes with Kaveh Veyssi, A14, Katja Torres, A13, Kendall Lord, A13, and Austin Bening, A13. Photo: Courtesy of Jennifer Burton/Five Sisters Productions

It was perfect for students because they’re the ones who are going to go out into the world and write new material for television and for advertising. And my class [FMS 34: Producing for Film] is a hybrid; students learn about filmmaking and also film studies or media studies. By the end of the class, my students were bringing in material and saying, “I never realized this was ageist.” They came to me years later and said it really changed how they see older characters in media.

I brought in Five Sisters to give the students professional experience and mentorship with professionals in each department (camera, sound, lighting, costumes, editing). It’s been wonderful seeing students continue working with professional filmmakers they met through our mentorship (or us) during the Old Guy shoot, such as Lai-San Ho, who is now an editor on This Is Us.

Will viewers be able to tell that you filmed on campus?

You definitely recognize some spaces and you'll see that other spaces were completely transformed. Tufts people will recognize the Jackson Gym Hall, plus the DTD Frat House in episode two. Tufts Health Services features prominently in episodes five and six. The backyard scene at the end of episode five is behind the Ex College, and we shot the bus stop scene in episode four in front of the Bolles House (LGBT Center/Latino Center) on College Avenue—that scene also features Sheriden Thomas, who teaches acting at Tufts.

Other faculty on screen include Ted Simpson in the crew scene of episode three (I play the director in that scene), and Professor Aniruddh Patel from the psychology department as the photographer in episode 1. Moreover, every student in the producing class is in the series: Austin Bening, A13, Michael Grant, A14, Sam Plasmati, A13 Kaveh Veyssi, A14 (who went on to become a film producer), Lia Kastrinakis, A14, Kendall Lord, A13, Lai-San Ho, A13, Josh Grelle, A16, Bruce (Yue) Wang, A13, and Katja Torres, A13.

Did making Old Guy give you new takeaways about ageism?

Doing this project gave me specifics about ageism. For example, about 10 percent of characters on television shows are over 60, but in the population it’s 20 percent, and many characters on television are narrow types—fodder for the younger, fully developed characters. Before making Old Guy, I knew generally about ageism, but I didn’t realize the extent of it. The goal for all of us is to grow old, right? So when we limit what we think is possible for older characters by depicting narrow ideas of how lives can be lived, it limits us all. That just became crystal clear by making this project.

Are there particular changes in media or society that you hope Old Guy will support?

I think the most direct thing that Old Guy can help change is depictions of older people on television and in movies. Having older writers, advertising executives, and executives making some of these decisions makes a big difference. That’s really important, and research shows that television writing rooms with older writers put out much less ageist content. Also, when older people watch ageist content and then discuss it, it has less of an impact over their lives.

Awareness is the first step toward change for creators and for consumers, and we hope to spark that awareness with Old Guy. Each episode is free online, and people can share them easily through social media. They can subscribe to our YouTube page for Old Guy and connect with others in the anti-ageist movement. We are also doing screening discussions. I'm hoping Old Guy will be a starting point for new conversations about aging and ageism.