Exclusive research: Where the youth vote could matter most in 2020 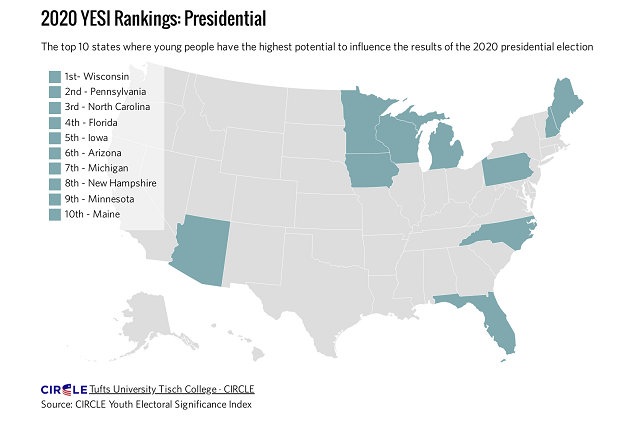 MEDFORD/SOMERVILLE, Mass. (May 11, 2020)–A new index from Tufts University researchers offers insight into the potential power of the youth vote to shape the outcome of the 2020 elections across the country, ranking the top districts and states where young people could have a significant influence on the outcome of the presidential race, as well as U.S. Senate and House contests.

The index takes into account the competitiveness of the electoral contests, as well as other indicators such as demographic characteristics, recent differences between youth candidate support and overall support in the state, historical youth turnout patterns and voting laws that encourage participation.

While young people influence elections in many ways, including through activism, online outreach to their peers and work on campaigns, the 2020 YESI highlights the geographic areas where youth (ages 18-29) are poised to have a disproportionately high impact on election outcomes this year.

“We are delighted to offer this powerful, data-driven tool for action. Youth representation really matters, and we strive to provide actionable data and information that can bring more and diverse young people into civic and political life,” said Kei Kawashima-Ginsberg, director of Tisch College’s CIRCLE. “We know that young people can shape our elections, our policies and the future direction of the nation, and we hope the YESI rankings will encourage campaigns, media outlets and advocates across the country to reach young people, engage them on issues they care about, and provide clear and reliable voting information. This outreach is more important than ever, as many young people are likely to be voting by mail in their first federal election.”

Throughout the election cycle, CIRCLE will also be sharing additional analyses about groups of youth within these states, including youth of color and young people living in rural areas, who could have a particularly large influence.

CIRCLE (www.civicyouth.org) is a nonpartisan, independent, academic research center that studies young people in politics and presents detailed data on young voters in all 50 states. CIRCLE is part of the Jonathan M. Tisch College of Civic Life. The only university-wide college of its kind, the Jonathan M. Tisch College of Civic Life (http://tischcollege.tufts.edu/) offers transformational student learning and service opportunities, conducts groundbreaking research on young people’s civic and political participation, and forges innovative community partnerships. Its work is guided by two core beliefs: that communities, nations and the world are stronger, more prosperous, and more just when citizens actively participate in civic and democratic life; and that higher education has a responsibility to develop the next generation of active citizens.