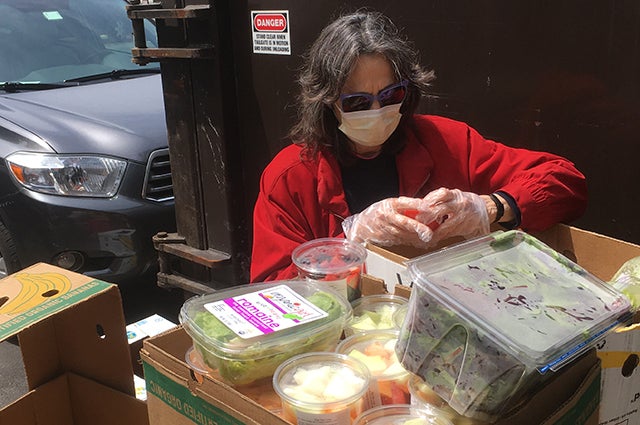 Tufts University is donating the use of one of its dining centers on the Medford/Somerville campus to a coalition of Massachusetts food rescue organizations that have been working overtime to collect and distribute food to a growing number of people in need during the pandemic. The campus space will give the three nonprofits—Food Link, Food for Free, and Boston Area Gleaners—crucial extra capacity over the next two months.

“Now, more than ever, we need to help our neighbors facing food insecurity,” said Rocco DiRico, Tufts’ director of government and community relations. “Food Link and organizations like them are providing a vital pipeline of fresh food to local nonprofit organizations in our host communities. We are happy to share our resources to help them carry out their mission."

The coalition will be using Carmichael Dining Center, just off the quad. DeAnne Dupont, co-founder and president of Food Link, which took the lead on arranging the agreement with Tufts, said the dining center’s kitchen has four times the refrigerator space of Food Link’s current facility, a rented storefront in Arlington, Massachusetts.

“Refrigeration is key,” said Dupont, explaining that now more perishables such as milk, meat, and fresh fruits and vegetables can be stored safety until they can be distributed.

The serving area will also provide space for volunteers—following social distancing protocols—to sort and repackage food surpluses collected from grocery stores, food wholesalers, and farms so that they can be given out or delivered by food pantries, senior programs, aid societies, and others.

With Tufts’ support, the groups are better positioned to meet a sudden need for hunger relief. According to Project Bread, a statewide anti-hunger organization, an estimated 38 percent of Massachusetts residents now face food insecurity, compared to 9 percent before the pandemic.

"We hate to turn away food donations, especially right now as food insecurity in Massachusetts has risen,” said Sasha Purpura, executive director of Food for Free. The partnership, she said, “will allow us to capture large volume donations of perishable foods, including milk and yogurt, store it safely at Tufts, and distribute it out between the three food rescue organizations.”

While some of the agencies the groups normally supply food to—such as after-school clubs—have had to pause their programs for social distancing reasons, several—including food pantries—have seen their clientele jump.

Other organizations have asked for help, too. Since the COVID-19 shutdown began, Food Link has distributed food to fifteen new community partners, and others are on a waiting list.

Access to Tufts comes at just the right time. The pandemic has brought disruptions to the food system, as food suppliers have seen clients such as restaurants, caterers, and institutional cafeterias cancel their usual orders.

Food rescue groups have been scrambling to get that food to the people who need it. Food Link, for example, has coordinated food collection from thirty new food donors, including farms and wholesale warehouses. Since the shutdown, Food Link has collected 100,000 pounds of food—about twice its usual amount.

But handling that surplus takes facilities. While on a call last month with fellow nonprofits, Dupont heard that perishables such as milk were going to waste because food rescue groups did not have the refrigeration capacity. “You are learning about all this food that is clogged up in the system,” she said. “You think, there must be something we can do.”

Dupont talked with her counterparts at Food for Free, which rescues two million pounds of fresh and prepared foods each year, and Boston Area Gleaners, which harvests and distributes surplus crops from fifty local farms. They brainstormed, thinking where they could find cold storage with access to a loading dock.

Dylan Frazier, director of operations for Boston Area Gleaners, thought to contact Patti Klos, Tufts’ director of dining and business services, who has long worked with local farms and food rescue groups. Tufts Dining, for example, has collaborated with Food for Free since 2015, donating surplus food from Tufts’ dining facilities that is packaged by student volunteers in ready-to-eat meals for delivery to people in need.

Klos responded enthusiastically. With most Tufts students away from campus during the pandemic, Carmichael Dining Center had paused service, and so was available.

Tufts, Dupont said, was “just so open and receptive to the idea.” In just a couple weeks, Tufts crafted an agreement giving the coalition use of the dining center and the building’s loading dock for two months.

In addition to making it easier for volunteers to load and unload boxes of food, the dock and parking area allow for the possibility of temporarily storing food next to the building in a refrigerated tractor trailer truck, should the coalition be able to rent one—or even better, have one donated.

Having options like that is so important right now, said Usha Thakrar, executive director of Boston Area Gleaners. “We don’t know what is going to happen. Every week what we’re being asked to do, and what needs to be done, changes,” she said. “And so having a space that allows for flexibility and quick ability to expand if we need to is super helpful.”

Julie Flaherty can be reached at julie.flaherty@tufts.edu