How Seasonal Allergies Affect Your Pet 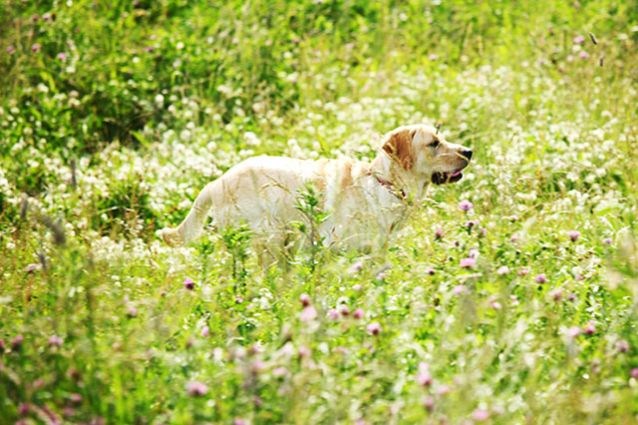 With an uptick in pollen comes the torturous sneezing and watery eyes. Pets get seasonal allergies, too, but they exhibit discomfort in different ways.

Allergies are the most common cause of skin issues in dogs and cats in Western countries, said Ramón Almela, a veterinary dermatologist at Cummings School of Veterinary Medicine. The main symptom for most patients – itchiness – is the same. However, how this itchiness manifests and the areas affected are different in cats and dogs.

Almela said cats sometimes hide their discomfort by scratching out of sight, like under a bed or behind a couch. Also, cats may overgroom instead of scratch, and since cats are frequent groomers, you may not notice the behavior as odd.

Dogs, meanwhile, make no such attempt to hide when they’re itchy and often rub their backs against the carpet or couch. “Dogs may have itchiness on the face and neck, and very commonly they’ll lick their paws,” said Ekaterina Mendoza-Kuznetsova, another veterinary dermatologist at Cummings School. “If the owner notices the dog is licking the feet, especially between the toes, try to look in-between the toes, especially from the lower side. Red and inflamed paw skin is classic for environmental and food allergies. For a flea allergy, a dog likely develops lesions on the back, tail, hind, thighs, and sometimes on the belly.”

In both cats and dogs, all that itching may cause another unfortunate side effect: skin infections. If the skin is damaged or broken, pets are exposed to an overgrowth of bacteria, which may lead to a bacterial infection. The infection can be treated with an antibiotic, though there’s a risk the bacteria could mutate and become antibiotic-resistant.

An Itch That Needs Scratching

There are two main causes of seasonal allergies in pets: pollen and fleas/flea saliva. Pollen is more prominent at warmer times of the year, and the timing of symptoms depends on the pet and what kind of pollen they are allergic to, said Mendoza-Kuznetsova. “Some grasses and trees have pollen season in the beginning of the summer, some of them have pollen season at the end of the summer, so that would influence when exactly the patient will develop the most severe clinical signs,” she said.

Fleas are also more common in warm weather from spring to autumn, when heat and humidity encourage flea eggs to hatch quickly, mature, reproduce, and lay even more eggs. However, flea allergy can be a year-round problem as well. Your pet doesn’t have to be covered in fleas to have a reaction. Some pets are hypersensitive to fleas and react to just one bite, even if the flea is no longer present, and even if the pet had been treated previously with flea prevention. This can be confusing for pet owners who believe that if they can’t see a bunch of fleas then they aren’t in the house or on the animal, Mendoza-Kuznetsova said.

Even indoor cats that never go outside can get fleas, as the insects make their way into most houses on their own, on the backs of other pets, or even on people (albeit in small numbers).

Almela said all pets should be treated with flea prevention regardless of whether they go outdoors. Flea control products do not prevent fleas from biting; rather, they kill the fleas once they bite. The quicker they die, the fewer bites they produce.

If you notice that your pet seems extraordinarily itchy, or if you notice skin lesions or hair loss, it’s time to take your pet to the veterinarian. The sooner the better, Almela said, as the prognosis and treatment can be easier and better controlled in the early stages.

The veterinarian likely will collect a patient medical history and conduct a physical exam. If they suspect allergies, they likely will recommend flea or tick prevention or put your pet on a special diet to rule out a food allergy.

If the veterinarian suspects an environmental allergy, there are several treatments to help your pet feel better. Almela said anti-inflammatory drugs such as steroids can help at the beginning. Other possible treatments are immunotherapy, cyclosporine, topical steroids—or a combination thereof. If immunotherapy is elected as a treatment, the veterinarian will perform skin tests to see what allergens your pet reacts to. Those allergens can be included in an allergy shot.

“With immunotherapy, we are trying to change the immune system reaction and teach the immune system to behave normally,” said Mendoza-Kuznetsova. “It is very safe and very targeted, but it has disadvantages because it may take up to a year to see if it is effective or not. And we see response to immunotherapy only in 60 to 70% of patients.”

If a year sounds like a long time for your pet to suffer, there may be more immediate ways to get itch relief, said Almela. “It’s important to do some topical treatments with shampoo and sprays to restore the fatty acids in the skin barrier, and sometimes we use antiseptic if there is a secondary skin infection,” he said.