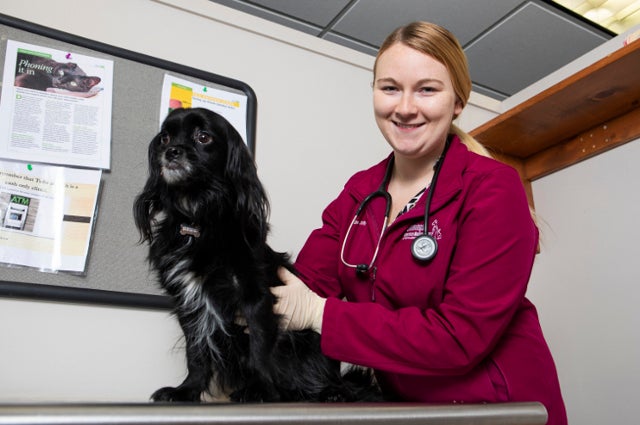 To minimize the risks of COVID-19 to all those who visit and work at Tufts, pet owners have to remain in their cars while their animals are seen inside for life-threatening emergencies.

Jolly plays a crucial role, transporting the pets between their owners and the emergency staff. Pet owners can’t see Jolly’s encouraging smile or enjoy the comforting hug she’d normally offer before ferrying their pet away for diagnostic tests.

But people can sense her warmth from the crinkled corners of her smiling eyes. And they can hear the empathy in her voice as Jolly reassures them that the veterinary team will do everything possible to make their pets feel better.

“Kate is one of a handful of people having face-to-face contact with our clients,” said Lauren Golato, a senior veterinary technician who has been Jolly’s supervisor for the past three years. “She really is the glue that’s holding everyone together.” 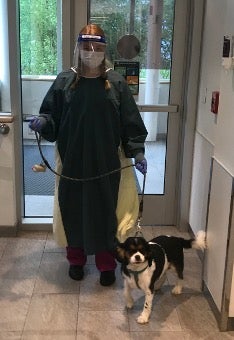 “When it’s a difficult day and someone needs to step out to take a breath, the rest of us are always there to step in,” said Kate Jolly, here escorting a patient into the hospital. Photo: Lauren Golato
If you had told Jolly eleven years ago that she’d stand out for supporting people, she would have said you were crazy.

Then, Jolly was among the first students at Worcester Technical High School to enroll in its new veterinary assistant training program. “I didn’t want to do the human nursing program, because I just didn’t like people much,” she explained. “But I really liked animals.”

That all changed after Jolly spent time working with pet owners at Tufts at Tech, the community medicine clinic that the vocational school opened during Jolly’s junior year.

“I came to realize that I’m good working with people,” said Jolly, “and that I can help out the pets by helping their owners.”

Jolly had chosen to attend Worcester Tech because it seemed a better fit than a traditional high school. Although she wasn’t diagnosed until college, Jolly said that she has two learning disabilities—dyslexia and ADHD—so “having to sit in a classroom and focus for six to eight hours a day doing straight book work is very difficult for me.”

At Worcester Tech, each week of classroom education is followed by a week of hands-on training. From the start, the vocational high school offered a number of programs that give students on-the-job skills, often while earning professional certification, so they graduate ready to enter the workforce.

In 2009, just as Jolly was entering Worcester Tech, the school announced a new veterinary assistant training program in partnership with Cummings School of Veterinary Medicine. High-school students training to be veterinary assistants and Tufts veterinary students would have the opportunity to gain hands-on skills working together in an actual clinic, caring for local pets under the supervision of Cummings faculty and volunteer veterinarians.

“I was super anxious that I wouldn’t get picked for the veterinary assistant program, and kept my fingers crossed for the day when we’d get the list to see where we’d end up,” said Jolly. “I was chosen, and it was life-changing.”

Jolly answered phones, worked with clients to see if they qualified for the clinic’s subsidized care, booked appointments, cleaned exam rooms, and helped restrain pets for the Cummings veterinary students and faculty. 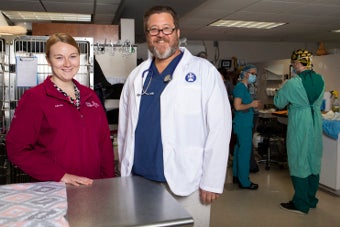 Kate Jolly visited mentor Gregory Wolfus, V98, director of Tufts at Tech, at her former high school in October. “You can imagine the joy I have in seeing future doctors learning from Kate, who is so full of empathy and resilience,” he said. “Kate is so engaged, and she just wants to make things better.” Photo: Anna Miller
Veterinarian Gregory Wolfus, V98, director of Tufts at Tech, remembers Jolly as “an incredibly mature individual for her age who helped and took care of her peers.”

While at Tufts at Tech, Jolly said she was profoundly affected by witnessing two elderly women choose to euthanize their pet to end its suffering from widespread ulcers.

“To know those women were going to be happier because their dog was no longer in pain was really big for me,” said Jolly. “I realized that, in the end, that’s who we are here for—the clients. And, for me, there was no other option in life than to work with pets and their people.”

Jolly, who had lost her father to suicide during her junior year, said she thought a lot about how the women returned to the clinic months later to thank the students and the staff.

“Seeing those women go through grieving and come out grateful on the other side helped me heal and grow from my own grief,” she said.

From Student to Teacher

After graduating with her veterinary assistant certificate from Tufts at Tech, Jolly chose to pursue a B.S. in animal science at UMass-Amherst. “It was Dr. Wolfus who encouraged me to go,” she said.

That support kept her going when things got tough.

“I almost failed out freshman and sophomore year,” said Jolly, who was eventually diagnosed with two learning disabilities. Her college advisors recommended that she change her degree, but, Jolly said, “I had Dr. Wolfus in back of my head, saying I could do whatever I wanted to do, and it pushed me to do the best I could.”

She found veterinary medical terminology to be particular challenging because “there are so many abbreviations and mixing up a letter or two really makes a difference.”

However, Jolly recalled tips she learned working with Christina Melvin, the veterinary technician who was her teacher at Tufts at Tech. “She would go through all terminology and make sure I could pronounce the terms correctly,” said Jolly. “She helped me learn how to learn.”

She also returned to Tufts at Tech’s mantra for both the high school and veterinary students: watch one, do one, teach one.

“I remembered that I learn best by explaining something and teaching it to others,” said Jolly. By her senior year, she was earning A’s.

Two months after graduating from UMass-Amherst in 2017, Jolly joined the Foster Hospital as a veterinary assistant. She started out working 10 p.m. to 7:30 a.m., assisting in the ER, at the front desk, and in the ICU.

“Given that it was overnight, we would see the worst of the worst cases. But I loved it,” said Jolly. “It was a skeleton crew, and I learned so much, so fast from being all hands-on-deck. I even helped take X-rays in my first week.”

Jolly now works three days a week from 6 a.m. to 6 p.m.—triaging pet patients, drawing blood, and admitting animals into the hospital, in addition to stocking and cleaning the ER.

“A lot of what I do here is help people go into the grieving process,” Jolly said. “I will go into the bereavement room to talk to owners about their options. They can hold their pet, or we can make their pet comfortable on the table. I can be present if they want extra support. And I’ve also sat with kids outside so their parents can have their own private time to say goodbye.”

That role has continued with even more weight during the pandemic.

“The only owners allowed in our building right now are those who are euthanizing a pet,” said Golato, her supervisor.

Jolly is the one who is there for clients at this difficult moment, gathering family members from the car and ushering them to the bereavement room. “It's a very stressful role and some have really struggled with it, but Kate stepped right up from the very beginning,” said Golato.

Jolly said she’s there to support the rest of the team, just like everyone else in the ER and ICU. “When it’s a difficult day and someone needs to step out to take a breath, the rest of us are always there to step in,” she said.

Wolfus said that he’s thrilled to now be watching Jolly flourish in a new role: teaching and supporting veterinary students at the Foster Hospital.

“You can imagine the joy I have in seeing future doctors learning from Kate, who is so full of empathy and resilience,” he said. “Kate is so engaged, and she just wants to make things better.”

“I never thought we’d be having a veterinary assistant high school student graduate and so quickly go on to carry the message forward about how to be a kind caregiver,” said Wolfus. “To me, that’s the Jolly story.”