Music is Medicine for the Soul 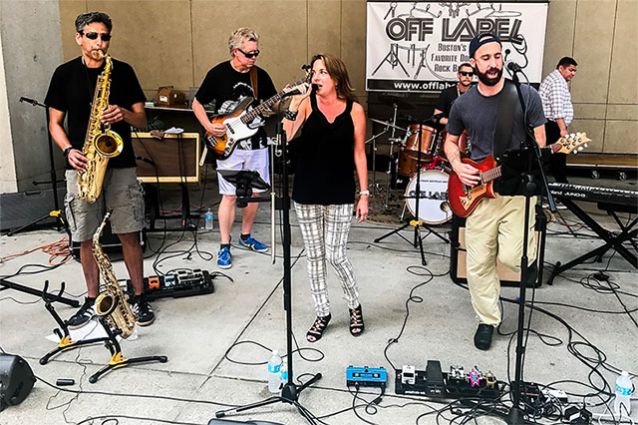 It’s a cool evening in May, the backyard patio is lit with mellow blue light, and the chords of “Let Love Rule” by Lenny Kravitz break the stillness. “It’s time to take a stand,” a strong, clear voice rings out. “Brothers and sisters, join hands. We got to let love rule.”

The singer is Shira Doron, infectious disease physician, hospital epidemiologist, and director of antimicrobial stewardship at Tufts Medical Center, and associate professor at the Tufts University School of Medicine. Beside her stands Roger Fielding, associate director at the Jean Mayer USDA Human Nutrition Research Center on Aging at Tufts, and professor at the Friedman School of Nutrition Science and Policy. Wearing a mask and a Tufts sweatshirt, he is playing the bass guitar.

“Hi, we’re the band Off Label, also known as the Docs Who Rock,” Doron tells the camera at the end of the song. “Like you, we’ve been going into work to fight this pandemic for months now, and we thank you for being our brothers and sisters in arms.”

The recording by Doron, Fielding, and their bandmates joined dozens of others created for Notes of Hope, an online concert series performed by local musicians and broadcast to hospital communities to honor the work and lift the spirits of health care workers during the COVID-19 pandemic. Watch it below:

Besides Doron and Fielding, two bandmates work in health-related fields—guitarist Dan Wiener is a thoracic surgeon at the VA Boston Healthcare System, and keyboardist and saxophonist Binny Shah is a cardiologist at Brigham and Women’s Hospital. “It spoke to an audience of people who we interact with, and who we know are working really, really hard and can use any support they can receive,” Fielding said of Notes of Hope. “It seemed like a good thing to do.”

Since starting to play backyard barbecues and Christmas parties eight years ago and expanding to local bars and clubs, the group’s members have changed a few times—and tragedy struck in 2015 when their guitarist, Brigham and Women’s cardiac surgeon Michael Davidson, was killed by a patient. But after honoring Davidson in a memorial concert, the band only became closer, practicing together in Doron’s basement every Sunday night and playing gigs every month. “It’s a really nice distraction and release,” Fielding said. “We’ve become friends over the years, and we enjoy each other’s company.”

Then in March, COVID-19 shut everything down. The group tried to keep practicing online, but Zoom had a time delay, and the musicians’ app they tried just wasn’t the same. “There are certain things in music that you don’t get when you just play by yourself,” Fielding said. When Notes of Hope organizer reached out, there was no question about their answer. “We were eager to get together,” Fielding said.

Doron, who hosted the group on her patio for their recordings, said the group has been a great emotional resource for her over the years. “Music is my number-one mood lifter—listening to it, but creating it with others, even more so,” she said. “And this is a group of like-minded individuals—people who understand what my week was like, more than others might.”

This common experience comes in handy when work runs over and band time gets crunched, Doron added. “We’ve had gigs where we’re set up and ready to play, and one person is running in at the last possible second after completing surgery,” she said. “But we all understand when one or more of us shows up to practice not having worked on songs we said we were going to work on.”

With the onset of the pandemic, the pressure at work has ratcheted up, Doron said. “It’s been nonstop—working day in and day out, many, many hours each day, guiding and educating and writing policies and calming people’s worries and concerns,” she said. “This is the hardest thing I’ve ever done, and I think it’s up there for most of not all frontline staff.” That’s why Doron wanted to participate in Notes of Hope, she said: “We have to find strengths wherever we can to make it through. Hopefully for some people that’s music.”

The songs were deliberately chosen from the band’s repertoire to send a message to health care workers, said Fielding, who hopes they enjoy the music. “These people have been going to work every day in an ever-evolving environment, taking care of people who are sicker than they have experienced all at one time ever before, not knowing what the real risk is in terms of the chances they could get COVID,” Fielding said. “The emotions and physical and psychological drain on them are probably pretty large, so anything we can do to say thanks is important.”