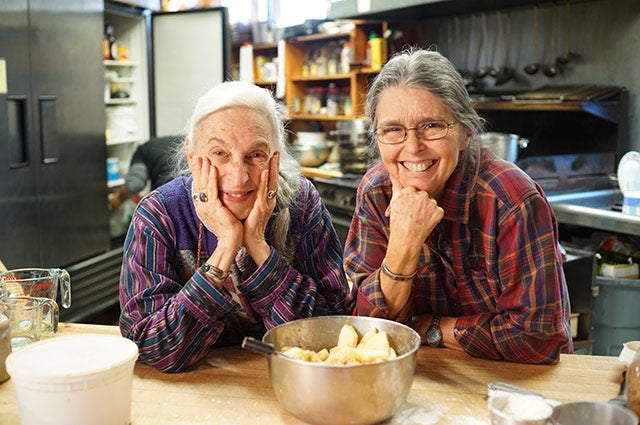 Selma Miriam, J56, remembers pining to play with a toy chemistry set as a ten-year-old in the 1940s. “My mother was not exactly excited about it,” she said. “But I just wanted to see things become something else. I wanted to change things.”

The feeling stuck—but it wasn’t easy to be a changemaker and a woman back then. Miriam—she was Davidson back in college—studied biology and psychology at Tufts and hoped to pursue a PhD, until an incorrectly fitted diaphragm and subsequent pregnancy stymied her plans. She married and became a housewife. “Standard things that happened to women in 1956,” she said.

Nearly two decades passed before Miriam left her marriage, got involved in the women’s liberation movement, and came out as a lesbian. She befriended Noel Furie at a local meeting of the National Organization for Women in 1972. Along with some other members of the movement, the duo decided to create a gathering space in Bridgeport, Connecticut—something like the feminist bookstores that had been popping up throughout the country.

But because they loved to cook, their collective would take the form of a restaurant. Miriam, an avid gardener, named it after a perennial flower that thrives in New England, Bloodroot.

From its opening in 1977, Bloodroot has turned out plates with purpose. The goal is to cook in a way that mirrors its founders’ philosophies: vegetarian in respect for other sentient beings, seasonal to reflect the local harvest, eclectic in reverence for other cultures.

Over the years, Miriam and Furie—along with other collective members who have come and gone—have hired women from throughout the world to cook. The space is decorated with mementos of the owners’ travels and hobbies, from weaving looms to antique photos. Fans can also buy copies of the restaurant’s self-published series of cookbooks, from The Political Palate, first published in 1980, to The Bloodroot Calendar Cookbook, a recent vegan collection.

Bloodroot’s outdoor terrace overlooks an inlet to Long Island Sound, which has come in especially handy during the COVID-19 crisis, as diners can eat al fresco while socially distancing. But even before the pandemic, Miriam noted, the space didn’t “look like a restaurant.” Indeed, there were no waitstaff: customers ordered up front, passing their ticket slips directly to kitchen staff through a window, and bussed their own tables.

For four-plus decades, Bloodroot has stayed steadfast, even as times have changed. Today it's easier to find vegetarian and vegan food and spaces where it’s comfortable to be openly LGBTQ. The restaurant scene is competitive, too. Money is tight, and Miriam and Noel often don’t bring their paychecks home.

But the beloved Bridgeport spot retains a loyal following. The 2019 documentary film Bloodroot cements the restaurant’s position in feminist history. And not even a pandemic could discourage Miriam and Furie from going into Bloodroot’s kitchen. “I couldn’t imagine staying home, so I go in each day to cook,” Miriam said. “I am very lucky to be able to do that.”

It's not all about the past. “We're going to keep going as long as we can, because a life worth living is to have new projects and things you want to do,” said Miriam, summarizing one of the philosophies that drives her: the idea that women can create things with the earth, from planting seeds to weaving bits of yarn. “All the things the earth gives us, and how we relate to it—that’s what magic is.”

Miriam’s most recent foray into magic involves making vegan cheese from cashew milk. “It’s just like that old chemistry set—it’s exciting to experiment and see what you get,” she said. “To try and make something, but to also make it suit your politics. That’s what I’ve been doing for the last forty-three years.”