How Racial Segregation and Policing Intersect in America

In late May, video of the brutal death of George Floyd at the hands of a police officer in Minneapolis went viral, stirring a national movement protesting the treatment of Black people by police.

What led to Floyd’s death—and that of many other Black Americans at the hands of police across the country—wasn’t just the actions of individual police officers, but also a result of systemic issues stemming from how policing is done in communities nationwide, said Daanika Gordon, an assistant professor of sociology in the School of Arts and Sciences.

She is currently studying differing policing strategies in “a highly-segregated rust belt city” (not identified as a condition of the research) that offers lessons about policing nationwide.

Looking at these patterns helps provide one explanation for why Black communities are disproportionately impacted by police violence, as well as providing a blueprint for equity in policing. Tufts Now spoke with Gordon about her research and what lessons might be drawn from it.

Tufts Now: Can you talk about what your research focuses on?

Daanika Gordon: My research looks at the relationships between Black-white racial residential segregation and policing. I’m interested in how the police, as an organization, respond to and further construct segregated urban landscapes.

How do police leaders define the needs and problems of different neighborhoods? How do they develop strategies to address these problems? How do their priorities shape the everyday work of officers? How do the on-the-ground activities of officers, in turn, contribute to Black-white inequalities in the city? 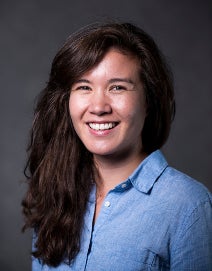 “Considering broad-scale redistributive policies that would enable Black communities to not only survive, but to thrive, would redress legacies of racial exclusion and reduce the need for policing,” said Daanika Gordon. Photo: Alonso Nichols
In short, I’m interested in the organizational logics and practices behind the racial and spatial disparities we see in policing today. And I’m interested in how contemporary practices reflect legacies of police participation in the systems that have constructed and maintained Black-white racial difference and hierarchy.

From their origins in slave patrols to their active enforcement of Jim Crow to their role in the rise of mass incarceration, the police have served white interests and perpetuated anti-Blackness. Might we see similar tendencies in the ongoing regulation of urban space?

How is the legacy of segregation represented in the neighborhoods of modern American cities?

Many of today’s Black-white racial residential patterns reflect those that emerged decades ago through discriminatory practices. Racial segregation was no accident. It was built through acts of racial violence; the use of zoning laws, racial restrictive covenants, and redlining; and white flight and urban renewal.

These dynamics contributed to the racial wealth gap that we see today, and they produced neighborhoods with profound differences in employment opportunities, poverty rates, school quality, access to health care, exposure to environmental hazards and crime, and so much more.

Neighborhood inequality persists. Even though segregation is declining, Black and white Americans still do not, on average, live in the same kinds of neighborhoods. This continues to impact nearly every facet of life, including experiences of policing.

You have studied the origins and consequences of divergent policing strategies by comparing two districts within the same jurisdiction—what have you found?

Policing responds to segregated landscapes, but it also constructs and maintains them. My current project examines policing in a highly segregated rust belt city. It compares policing strategies in two districts—one that includes the city’s downtown and many middle class, affluent, and predominantly white residential neighborhoods, and one that includes predominantly Black neighborhoods and some of the city’s poorest areas.

I find, perhaps unsurprisingly, that policing in these districts is very different. In the former, the police act as responsive service providers. They are quick, thorough, and helpful when citizens call, and they work collaboratively with residents and business owners to solve local problems.

In the latter, the police focus on intervening in violence. They do so through tactics like investigatory stops, which many see as aggressive, intimidating, and overbroad. In addition, the high volume of 911 calls in this district means that patrol officers are stretched thin, and citizens have to wait longer for a response to their emergencies.

While policing in these districts looks quite different, the dynamics in them are actually linked. In this case, police leaders intentionally devoted more resources to protect and serve the downtown and middle-class neighborhoods. Elected officials, business owners, and empowered residents demanded police service, and police officials complied because these areas were seen as vital to the city’s economic health.

But this came at the expense of other parts of the city. Black neighborhoods were overlooked as areas meriting further resource commitments, on the one hand, and positioned as criminal threats to be controlled and contained, on the other.

In short, the police reproduced historic patterns of institutional investment and protection in white neighborhoods, and neglect and suppression in Black neighborhoods. This continued a legacy of police enforcing a social order rooted in racial exclusion and control.

In what ways do police actions in the communities you’ve studied reflect and reinforce existing prejudices against those communities?

And saturating “high-crime” areas with police conducting stops will inevitably affect innocent residents of poor, communities of color. Indeed, we see vast racial disparities in stop practices in cities across the country. And we have ample evidence that stops fray police-community relations, undermine the legitimacy of the police, and lead to disproportionate exposure to police violence.

Second, under-policing reinforces legacies of public service neglect in Black neighborhoods. This is a problem that extends well beyond police response to emergency calls. Cities have failed to invest in both the front-end resources that would enhance community safety and strength, and the back-end resources to adequately respond to challenges when they arise. This continues a historic pattern of undervaluing the assets, contributions, and potentials of Black communities.

In the past, efforts were made in some cities to develop community policing—get officers out of cars and walk the streets and interact with local citizens. It was seen as a way to build bridges between police and communities. Did that work? And if so, is it a standard practice, and if not, why didn’t it take hold?

In theory, community policing is a promising paradigm. It suggests that what the police do in a neighborhood should be determined in collaboration with the residents of that neighborhood. It also encourages creative solutions to problems—connections to other services and crime prevention efforts, versus reliance on arrest and criminal prosecution.

But community policing has experienced limitations in practice, for many reasons. Community policing initiatives are often relegated to a small subset of officers, rather than incorporated into the ethos of the entire department. The work tends to engage those members of the community who are willing and able to work with the police, thus overlooking and sometimes targeting marginalized members of the community and those most wary of law enforcement.

Moreover, problem-solving efforts can be limited by the surrounding environment. The police cannot connect citizens to resources for stable housing, employment, drug treatment, mental health services, and others if those resources are meager to begin with.

Did your research find any new policies that police departments can implement or current policies that can be reformed to address inequalities between divergent communities and neighborhoods?

One set of conclusions that could be drawn from this research is that police resources need to be reallocated in ways that ensure equitable service provision and public safety for all city residents. Or that strategies and tactics in predominantly Black neighborhoods need to be reoriented toward crime prevention and community collaboration, versus aggressive crime control.

But my hope is that this project highlights the deeper sources of racial inequality in policing outcomes—discriminatory and uneven public and private investments in segregated neighborhoods.

Considering broad-scale redistributive policies that would enable Black communities to not only survive, but to thrive, would redress legacies of racial exclusion and reduce the need for policing.