Sean Harrington, A14, managed the software team for the Patriots, and now he’s got a startup focused on nutrition for top athletes 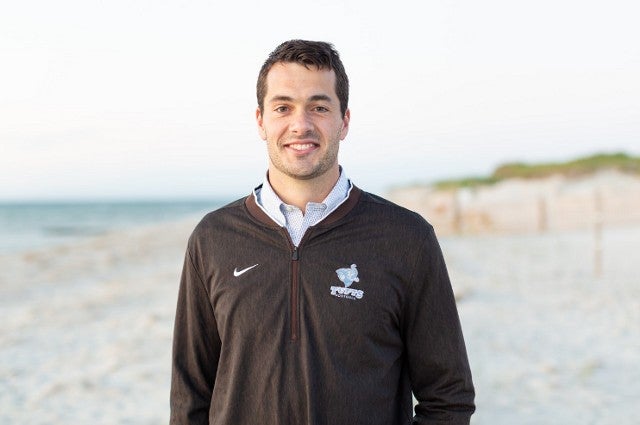 “Young Innovators” is an occasional series showcasing Tufts students and alumni who are turning opportunities and ideas into new and original products and programs.

Sean Harrington, A14, and Kevin Kusch left enviable jobs last year. They had managed the software and analytics teams, respectively, for New England Patriots, and witnessed the thrill of two Super Bowl championships.

Today they are entrepreneurs on a mission. Their innovation is Notemeal, a web and mobile app platform that aims to give sports performance dietitians the tools they need to deliver educational nutrition advice to top athletes.

“There were lots of tools to help strength coaches and rehab directors connect with their athletes,” said Harrington. “But there was no tool to help dietitians support athletes with respect to their everyday nutrition. And good nutrition is something they can certainly control to optimize performance.”

The startup, building on research with performance dietitians and top-tier level athletes—NFL players, U.S. military personnel, and Olympic medalists, among others—is now in development, thanks to a boost from Tufts. A finalist in the $100k New Ventures competition hosted by the Gordon Institute’s Entrepreneurship Center at the School of Engineering, Notemeal was awarded a Cummings Property rent credit—plus valuable coaching from judges with extensive knowledge and experience.

But it was his facility with computer programming that got him the job at the Patriots, and it’s a skill he now hopes to parlay into business success. He recently spoke with Tufts Now about his path toward entrepreneurship.

Tufts Now: How did you get into computer science?

Sean Harrington: I was always kind of a nerd growing up. My grandfather on my mom’s side worked on the Apollo Lunar landing module, and he would show me all sorts of cool machines he had at the house, and he used to take me to the Museum of Science. My dad has worked in construction since he was fifteen. He was always building things with me: from trebuchet projects in physics class to water gardens, and our house growing up.

I came to Tufts to study biology, initially. But I had a friend on the baseball team, Derek Miller, A11, who was like, “Hey, you should come take a computer science course.” I was like, “Computer science? I can’t even make Microsoft Word work. . . . I’m a sports guy!” But he made me take the intro class, COMP 11. I was way out of my depth, and I had to withdraw to avoid a failing grade. But then I went back and took it again my sophomore year. I got an A, but it was a rough start.

What motivated you to keep going?

I got hooked over the summer. I interned at IBM as a software test engineer and I spent the whole time teaching myself how to code when I should have been working, in true entrepreneurial spirit. Larry Rose was my manager there, and despite not getting “the call back” to work the following summer, Larry was a huge inspiration in my career. So that’s why I came back and took the course again. I just fell in love with it. I love when you spend hours on something, and you can see results.

As I understand it, Tufts grad and football alum Shane Waldron, a former tight ends coach with the Patriots, learned a search had begun for a computer science whiz with a football background. He contacted Jumbo football coach Jay Civetti, who recommended you.

That’s correct. Coach Civetti knew that I was a computer nerd, because my senior year I had shared my “top-secret honors thesis project” with him. He reached out to me right after I had taken a job at Google and told me that I had an interview at Gillette Stadium with the Patriots. It was certainly a “right place, right time” moment. The opportunity changed my life. I ripped up the Google contract, and started with the Patriots two weeks after the interview.

What was the initial software you created at Tufts for that thesis project?

The idea was to automate the game tape video breakdown process. As an example, I wanted to auto-identify the offensive formation of a team and categorize receiver routes. This would give time back to the coaching staff, so they could spend it on game prep, and more cognitive tasks. The initial release of the software could detect the line of scrimmage and players and wide receiver routes from a video freeze frame using computer vision. Though other companies have since solved this problem, the original source code lives on.

And during your senior year you and football student manager Michael Roubey [A14] also analyzed massive amounts of data within NESCAC, the conference Tufts plays in, to find out the probabilities of scoring based on down and distance, yard line, and time remaining.

In that case, we saw that Tufts coaches sometimes faced difficult decisions on fourth down.

Roubey, who ended up working as an analyst for the Carolina Panthers, wrote the statistical algorithms, and I wrote the code to implement them. The program parsed and fed fifteen years of NESCAC football data into the program. The output was something akin to “should we punt on fourth down?”

Talented coders are in high demand—so why quit your job at the Patriots for the risky entrepreneurial route?

I remember we had just won the Super Bowl, which was the pinnacle of my life to that date. I was thinking about what I wanted to do next. One of the thoughts that had been growing in my head was that I wanted to have a larger impact than just working with one team.

I had also just been working on publishing some literature in the nutrition space, and I had this really fortunate network in professional sports—given my background with the Patriots and the coaching staff and the performance guys. How can I bottle all that stuff up into one and run with it? I’d always wanted to start a company. I always wanted to build something from the ground up and build a team, build a culture, so it made perfect sense once it all came together.

Have you felt, as an athlete, that nutrition has impacted your performance or your outcome as a team or an individual?

Timing, or scheduling, is something every dietitian talks about, and I saw that over three phases of my life. In high school, you’d have a weird window where you’re eating lunch at 11, but football practice wouldn’t start until 3:30 or 4, and you had to fill that window, usually with fast food or, if you’re fortunate, like I was, your mom packs you an extra lunch. But a lot of high school athletes often go into these practices under-fueled.

Even at Tufts we were getting on the bus for an away football game, eating Dunkin Donuts bagels with peanut butter. And at the Patriots, I’m seeing hyper-tailored meals and a buffet before and after practice. They’re getting a tailored recovery protein shake after their workout. It’s just hyper-optimized nutrition. Clearly, it works, right? It was interesting seeing the three different phases throughout my life and how it changed at the highest level.

What would share with other young entrepreneurs about what you’ve learned so far in your entrepreneurial journey?
My take is the best thing you can do at any given time is just to do, and don’t get hung up on making the perfect decision. There is no perfect. You’re going to have to make a ton of decisions, and a lot of them are going to fail. Just make sure you’re constantly moving forward. If you screw up, fail forward.

I also strongly believe that a lot of athletes should take a STEM career seriously. We need to lose the stigma of “I don’t want to be a nerd. I won’t have time to do this with athletics.” I wouldn’t have known it could be done unless someone pushed me in that direction.

Now I am an example of a former athlete who has made it to finals of the $100K competition—thanks to a Tufts computer science education. That experience and all that support are the best things that have happened to me, so I feel obliged to spread this message.