We All Scream for Livestreams 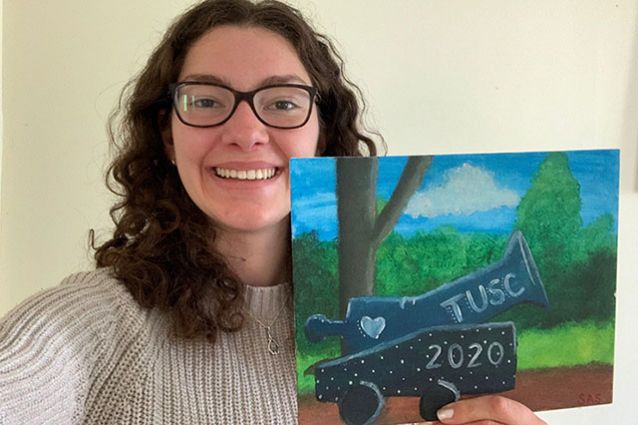 When undergraduates were told not to return to campus after spring break, the Tufts University Social Collective was eager to find a way to kindle community in the Jumbo diaspora. The student-run organization stepped in with online programming. The offerings ranged from concerts and exercise sessions to virtual goat yoga and a chance to paint the cannon from thousands of miles away. Here’s a sampling of the online goings-on this past spring.

The hircine breed named for its penchant to fall over if startled. But these goats aren’t camera shy, as several pranced around a teacher as she led a virtual session of goat yoga. (It’s a thing.) While yogis at home didn’t get to feel little hooves on their backs, they did get to do sun salutations while watching baby goat antics—both stress-relievers in their own way.

Name of the award-winning poet and rapper who performed at one of three QuaranStream livestream concerts. “I’m so happy to be here,” she told those who logged on. “And by here, I mean my bedroom.”

Secret ingredient in the chocolate chip cookies prepared during a bake-along by TUSC member Siobhan Shamlian, A20, from her family’s kitchen. The combination of shortening and butter creates the “artery-clogging goodness” that make these cookies irresistible, she said. Check out the recipe. 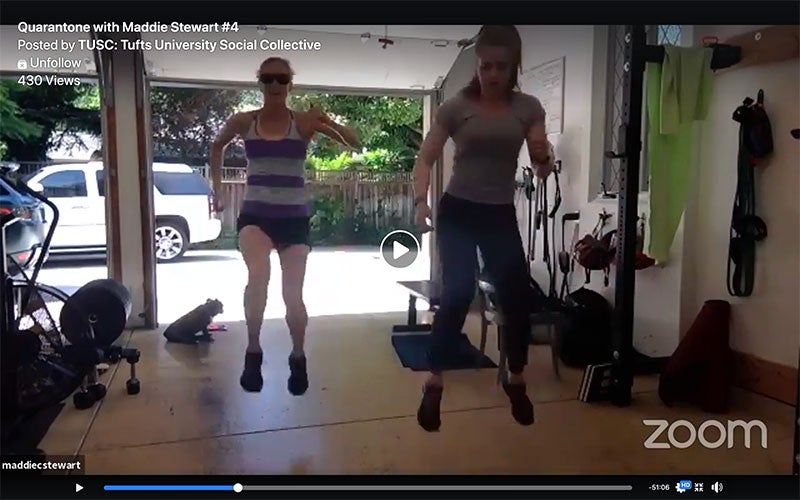 Maddie Stewart, A20, livestreamed a workout in her garage with her mom.

Substitute for free weights during arm exercises led by Maddie Stewart, A20, co-captain of the women’s volleyball team, who presented weekly QuaranTone sessions from her garage/home workout studio, accompanied by her mom--and her two adorable dogs, who had a knack for getting in some moves of their own.

Or, in Hebrew, “Hineni,” a mantra suggested by Rabbi Jordan Braunig of Tufts Hillel, during one of his Friday morning meditation sessions. “Normally on campus, people would be huddled in Tisch now. It’s a weird time to be at home,” Braunig said in a session during finals. “Just keep that breath coming in, and tell yourself, ‘Here I am. I’m here, I’m available, I’m present.’ ”

Term for your summer internship falling through because of the pandemic. Tufts Career Fellows offered advice on what to do. How to start? Reflect on your goals and how you can accomplish them in other ways. Consider crafting an opportunity for yourself. And remember, everyone has had to adapt. “This summer is an anomaly,” said Sheryl Rosenberg, assistant director of career services. “Employers know that.”

The Tufts University cannon was painted to celebrate the Class of 2020.

The campus landmark that students were unable to paint in celebration of Commencement. But no need to despair: TUSC mailed art supplies to interested seniors, who had an online paint-night party to create personalized cannons on canvas. Not quite as dramatic as the real thing, but on the other hand, no one had to stand guard until dawn after they were done.

The origami project that Jared Smith, A16, director of the BLAST program, demonstrated in a how-to folding session. Japanese legend says someone who creates a thousand origami cranes will have a wish come true. Here’s hoping a nimble folder met the challenge—and wished for a healthy fall.