Young people prefer Biden by 34 points; youth engagement is higher than 2016 and 2018, though campaign outreach still a concern in both parties 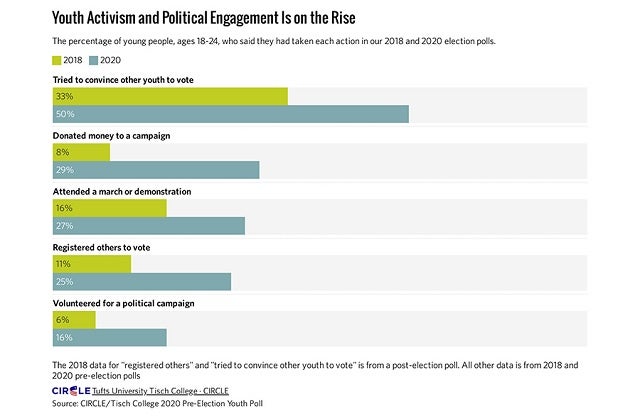 The 2020 CIRCLE/Tisch College Youth Poll offers important insights, revealing that youth are more active and engaged than in 2016 and 2018 and reporting much higher rates of protesting and peer-to-peer voter outreach.

The survey was designed and analyzed by the Center for Information & Research on Civic Learning and Engagement (CIRCLE), the preeminent, non-partisan research center on youth engagement at Tufts University’s Jonathan M. Tisch College of Civic Life, and was conducted by Gallup, Inc., from May 20 to June 18, 2020. Unless otherwise noted, survey results refer to people ages 18 to 29.

"It is clear that 2020 could be a watershed election for youth participation," said Alan Solomont, dean of the Tisch College of Civic Life. "Young people are leading on issues, and they are organizing and demanding change. They know that their generation has the power to make a difference. At the same time, we know that campaign contact is one of hte key drivers of youth voter turnout. And we see that both parties need to do more in this regard. In 2020 and beyond, we can and should lift up the voices, energy and leadership of young people."

“Our poll shows that the unprecedented rise in youth activism in 2018 is continuing in 2020, with political activism and peer-to-peer engagement now becoming the norm among young people. In the face of considerable disruptions and confusion in electoral procedures caused by the COVID-19 pandemic, this energy must not go to waste,” said Kei Kawashima-Ginsberg, director of Tisch College’s CIRCLE. “We must convey clear and accessible information about when, how and where young people can register and vote and actively reach out to youth, especially those who are historically marginalized in our elections.”

Throughout the election cycle, CIRCLE will be sharing additional research and analyses about young people’s participation, including youth of color, young people living in rural areas and first-time voters, who could have a particularly large influence on the 2020 elections.

CIRCLE (www.civicyouth.org) is a nonpartisan, independent, academic research center that studies young people in politics and presents detailed data on young voters in all 50 states. CIRCLE is part of the Jonathan M. Tisch College of Civic Life. The only university-wide college of its kind, the Jonathan M. Tisch College of Civic Life (http://tischcollege.tufts.edu/) offers transformational student learning and service opportunities, conducts groundbreaking research on young people’s civic and political participation, and forges innovative community partnerships. Its work is guided by two core beliefs: that communities, nations and the world are stronger, more prosperous, and more just when citizens actively participate in civic and democratic life; and that higher education has a responsibility to develop the next generation of active citizens.