Can a Human Drug Stop Life-Threatening Bleeding in Dogs with Traumatic Injuries? 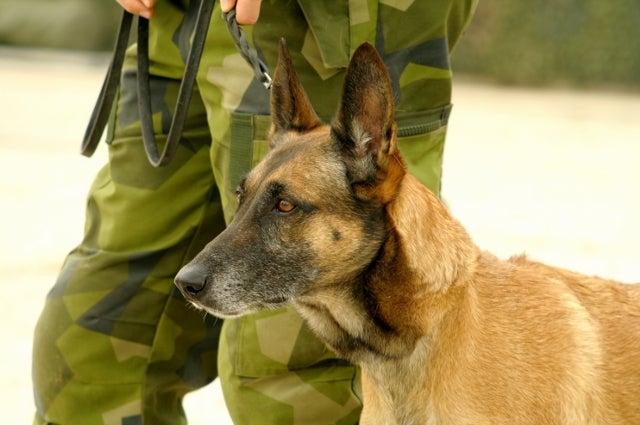 Sean Majoy, V06, VG13, was far too familiar with the toll that traumatic bleeding can take on dogs before he joined Cummings School as an emergency and critical care veterinarian and clinical assistant professor. Majoy served on active duty in the U.S. Army Veterinary Corps from 2006 to 2017, and one of his jobs was caring for military working dogs returning injured from Iraq and Afghanistan.

“Military working dog teams—that is, the dogs and their handlers—save hundreds of lives on the battlefield due to their unmatched ability to detect hidden explosives,” said Majoy, who worked at LTC Daniel E. Holland Military Working Dog Hospital on Joint Base San Antonio-Lackland Air Force Base in Texas.

“As a result, in Afghanistan and elsewhere, enemy combatants may preferentially target these teams if given the opportunity,” he said. “So military working dogs’ chances of getting wounded catastrophically are pretty high.”

Now the emergency and critical care team at Henry and Lois Foster Hospital for Small Animals is participating in a clinical trial designed to assess if a human medication given in the field to injured soldiers with traumatic bleeding would also benefit military working dogs with catastrophic injuries.

The study also may improve the chance of survival for pets and other working dogs, such as local and state police K-9s, Majoy said. 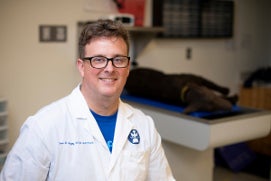 “Military working dogs’ chances of getting wounded catastrophically are pretty high,” said Sean Majoy, here with a simulation mannequin that the U.S. military trains on to manage trauma and CPR for working dogs. Photo: Alonso Nichols
The U.S. military has been using the drug, called tranexamic acid, to help save people severely wounded in the line of duty. Administered as a single dose in the field, tranexamic acid works by halting the abnormally rapid breakdown of blood clots that can happen during bleeding in major trauma.

The U.S. military started using tranexamic acid based on the results of a landmark 2010 study in the scientific journal The Lancet. “It was a really impressive study,” said Majoy. “It looked at the effect of giving tranexamic acid versus a placebo by IV in 20,000 severely traumatized patients, across forty countries and 270 hospitals. It found that tranexamic acid given within three hours of the point of injury significantly decreased all causes of mortality.”

Soon after that study was published, the Department of Defense began including tranexamic acid as a field treatment for traumatic bleeding in soldiers. A follow-up study published in 2018 in JAMA Surgery suggested that the subsequent use of tranexamic acid in injured U.S. service members has largely been successful, but not without some concerns.

In some instances, tranexamic acid has been given when not needed, because the service member didn’t have a catastrophic bleed, explained Majoy. And the drug appears to carry a risk of causing life-threatening blood clots. However, “those soldiers that end up with blood-clot complications still survived the catastrophic injury that was originally treated,” he said.

Given that dog-handler teams are so often targeted during military conflicts, the Department of Defense hopes tranexamic acid also might help save more military working dogs, Majoy said.

“They wanted to start looking at whether the drug seems to help that population of dogs coming into referral veterinary hospitals with highly traumatic injuries and severe bleeds,” such as pets hit by a car, he said.

So the U.S. Special Operations Command funded a study through NC State College of Veterinary Medicine.

“With our high caseload and designation as a Level 1 veterinary trauma center, we quickly enrolled to help,” said Armelle de Laforcade, V97, who heads Tufts’ emergency and critical care service.

Together, the four veterinary schools seek to enroll a total of forty dogs brought into their ERs after experiencing trauma. Upon arrival, dogs will be immediately assessed and treated for their injuries and shock. Then, once a pet has been stabilized, its owner can decide whether or not to enroll in the clinical trial.

All dogs in the trial receive any necessary lifesaving care, but participants are randomly assigned to additionally receive either tranexamic acid or a saline placebo. In return for this and three blood tests over twenty-four hours, the study pays for a hospital credit for use toward the partial cost of the animal’s care.

“Tufts is definitely leading the way,” said de Laforcade. “With one of the busiest emergency caseloads of the veterinary teaching hospitals, we see a lot of trauma cases that potentially qualify for this study.”

The military trauma management system is unique in that in certain environments, such as Afghanistan or Iraq, human health-care providers may be tasked to care for both the injured soldier and a military working dog—in both the battlefield setting and, if a veterinarian is not available, in a trauma center, Majoy said.

“It is important to know if the effectiveness of tranexamic acid to mitigate traumatic bleeding in dogs is similar to the evidence we have for improving survival in human trauma patients,” he said. “This study leads the way to investigate that question.”