A Deadly Rabbit Virus Spreads in the U.S.

An emerging virus threatens both wild and pet rabbits in the United States. The fatal virus—which causes an Ebola-like disease called rabbit hemorrhagic disease—already has been reported in the western and southwestern United States.

The virus was first diagnosed in domestic rabbits in China in 1984, but it is believed to have originated in wild European rabbits. It soon spread around the world via human travel. (Australia and New Zealand purposefully introduced the virus to try to control their numbers of feral rabbits.)

“We’ve tried to keep this virus out of the country, but there have been sporadic outbreaks in domestic rabbits,” said Jennifer Graham, a veterinarian at the Henry and Lois Foster Hospital for Small Animals. “For example, there was one situation where a woman working in a restaurant that served rabbit brought the virus home to her own rabbits.”

At first, the illness did not appear to affect wild species in the U.S. However, this spring the virus killed black-tailed jackrabbits and cottontails in New Mexico and Arizona. It also has been detected in wild, pet, and feral rabbits in California, Colorado, Texas, Nevada, and Washington.

“Once the virus gets into the wild-rabbit population, there’s no way to stop it from rapidly spreading and becoming endemic,” said Graham, head of Cummings School’s zoological companion animal medicine (ZCAM) service. “Veterinary epidemiologists feel this disease is going to be pretty established throughout the country by next year.”

The good news is that the virus cannot be transmitted by rabbits to humans or other animal species.

The bad news is that it’s a highly contagious and insidious virus. It can survive extreme temperatures and for long periods of time in the environment, and people can transmit it via their clothing and shoes. 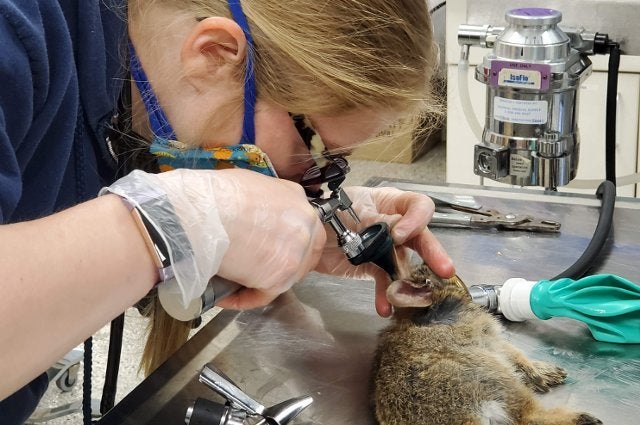 Veterinarian Kimberlee Wojick, A01, V06, cares for a New England cottontail rabbit that’s part of a captive breeding program at Roger Williams Park Zoo. Photo: Courtesy of Roger Williams Park Zoo
“That makes it incredibly easy to spread,” said Graham. “If the disease is in the wild rabbits you see all the time, it’s almost inevitable that you will track it into your rabbits if appropriate precautions are not taken.”

“This disease is a little bit like COVID-19 in that the virus can be spread by carriers with no symptoms,” added Graham. Although some strains can be up to 100 percent fatal, animals infected by the strain currently circulating in the U.S. can shed the virus for a long time—despite appearing fully recovered from a brief illness. These rabbits may have a fever, lose their appetite, and appear limp for just a couple of days.

There is no treatment for rabbit hemorrhagic disease. A vaccine effective against the virus has been used in other countries, but it’s not available here.

“We want to be proactive and vaccinate pet rabbits before the virus arrives,” said Graham. But this is complicated by the fact that any vaccines sold within the US must be licensed by the USDA after satisfactory safety and efficacy testing. The APHIS-Center for Veterinary Biologics (CVB) is only issuing permits for the importation of the European vaccine for emergency use in states with confirmed cases of the disease. In the absence of a licensed product, veterinarian must apply for a special permit for vaccine importation.

This makes it both expensive and legally difficult for U.S. veterinarians to import the vaccine. The vaccine, which has a short shelf life, must be ordered in large quantities. And it can take months to get once the disease is reported in an area because vaccine shipment requires coordinating efforts between the manufacturer, the USDA, and state and local veterinarians.

Local animal shelters meanwhile are considering options for minimizing risks to rescued rabbits as the disease approaches, said Graham. A likely scenario is that rabbits will be placed in individual foster homes without other rabbits to avoid the risk of housing groups of rabbits in a single location.

“I feel like we’re lucky in New England in that we have had more warning than the West Coast and the Southwest,” she said. “People also haven’t been traveling as much lately because of pandemic restrictions, which has bought us some time. So hopefully by the time we see the virus, we’ll be able to offer vaccinations.”

A Problem in the Wild

Unfortunately, it’s not possible to protect most wild rabbits.

“We are very aware of this disease and looking out for suspicious cases,” said Maureen Murray, V03, director of Tufts Wildlife Clinic. “It would definitely be worrisome if it appeared in this region.”

A sudden die-off in the common eastern cottontail population would be concerning because these ubiquitous rabbits are prey for so many other wild species, from hawks and owls to bobcats, lynx, coyotes, foxes, and weasels. All predators that depend on this link in the food chain would suffer.

Murray noted there have not been any suspicious cases at Tufts Wildlife Clinic so far.

Throughout the U.S., sensitive populations of rabbits—such as pygmy rabbits and the Riparian brush hare—could be decimated by an outbreak of this virus.

Kimberlee Wojick, A01, V06, a veterinarian at Roger Williams Park Zoo, said her team is anxious to get hold of the vaccine so they can try to protect New England cottontail rabbits.

Although these little brown rabbits at first glance look just like the abundant eastern cottontails in suburban neighborhoods, the New England cottontail is an endangered species—and the region’s only native rabbit. These shy creatures require a habitat of thick underbrush that’s increasingly hard to find.

“They don’t do well in areas that have been cleared, such as fields or lawns,” Wojick explained.

Roger Williams Park Zoo participates in a captive breeding program with the U.S. Fish and Wildlife Service and a consortium of state wildlife services in Rhode Island, Massachusetts, Maine, New Hampshire, Connecticut, and New York. For the conservation project, wildlife biologists periodically capture New England cottontails from the wild to breed them at the zoo—releasing their offspring back to protected habitats.

“We have a lot of concerns about the rabbit hemorrhagic disease potentially impacting the wild populations, but also our captive breeding populations,” said Wojick.

“Clearly, we can’t vaccinate all the wild populations of this rabbit,” she said. “They’re pretty elusive. But we would love to be able to protect the rabbits we have in captivity, and then also vaccinate the offspring that are released into the wild.”

Tips to stop the spread

Once the disease reaches New England, Jennifer Graham urges rabbit owners to take all precautions to protect their pets, even once a vaccine is available in the U.S.