Dispatches from the Pandemic

A New York City EMT, a minister, and a biologist describe how the crisis has transformed their work and volunteer commitments

Jonathan Ehrlich, A11, got his start as an emergency medical technician (EMT) with the student group Tufts Emergency Medical Service as an undergraduate and has volunteered with the Central Park Medical Unit in New York City since 2008. When not running his real estate business, he coordinates the all-volunteer, donor-funded unit’s more than 150 members, who usually cover the park from 9 am to 5 pm on weekends. 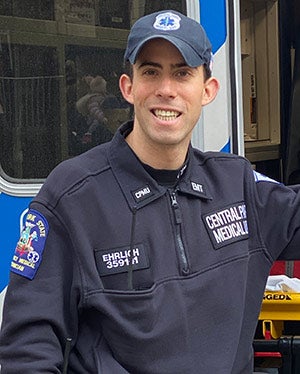 In early March, the fire department, which operates the 911 system in New York City, activated the mutual aid system. We started responding to calls throughout the city. Most of that was going into the homes of people who were COVID-19 positive. We had volunteers out in ambulances 24/7.

When you’re walking into somebody’s apartment and it’s the size of a shoe box and they’ve been in there for weeks, these aerosolized droplets are all over the place. Every call takes twice as long because you have to put all the equipment on. For a while, one out of every four paramedics and EMTs had COVID and was home sick. I had a minor case and I was able to recover quite quickly and return to volunteering.

Five hundred ambulances from California, Texas, Florida, the Midwest, were in the city for about two months. New York City typically receives around 4,000 calls for medical help in a 24-hour period. On 9/11, the call volume was about 6,000. In the last week of March, first week of April, there were over 7,000 calls for help per day. We blew through the previous record five days in a row.

Medical professionals working in emergency care had never experienced such a flood of patients asking for help. It gives all of us appreciation for those who carry on. If we can do that, we can do anything.

— as told to Laura Ferguson

“This pandemic seeks to steal our breath.”

The Rev. Jennifer Bailey, A09, founder and executive director of the nonprofit Faith Matters Network 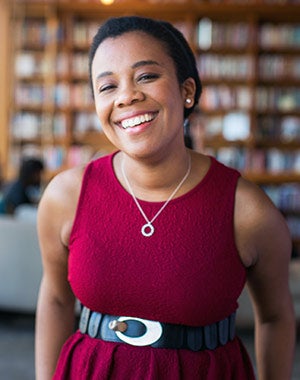 I started Faith Matters Network in 2014 to support faith leaders, community organizers, and activists. In many ways, it feels like we were built for this moment.

For those protesting against murder and police brutality against Black people, there’s a constant experience of violence and confrontation. Faith leaders are dealing with how to lead a congregation or hold a funeral on Zoom. Many people have lost someone to COVID-19. And there is an absence of spaces for folks to share their grief and mourning.

We have created weekly virtual meetings facilitated by our chaplains, where faith and movement leaders can connect with each other and get a little jolt of energy. We also hold one-on-one sessions where people can express what’s going on with them, or sometimes just sit in silence with someone for forty-five minutes. It’s a really beautiful gift to be able to offer.

This pandemic seeks to steal our breath. George Floyd’s last words were, “I can’t breathe.” The way we are showing up for people is by creating spaces to help them breathe. For many communities, the very act is revolutionary—it reminds us we are still alive, and still here.

—as told to Monica Jimenez

What questions can we ask from the data we already have in the lab? 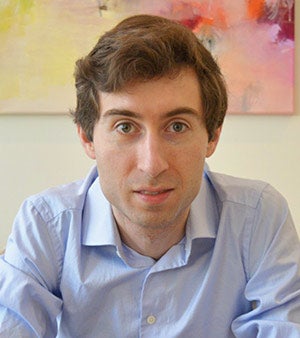 Biologist Jose Ordovas-Montanes, A10, studies chronic inflammatory conditions at Boston Children’s Hospital. He and his collaborators were able to pinpoint the cells that the virus behind COVID-19 likely singles out for infection. Their peer-reviewed paper was published online in the journal Cell in April.

We started in February, wondering what questions can we ask from the data we already have in the lab? We had large amounts of data about the nasal cavity, lungs and intestine, which gave us a distinct head start to understand what cells the virus was targeting.

Researchers had recently shown that a receptor called ACE2 and a cofactor known as TMPRSS2 were the two anchor points for the virus to enter cells. It’s like a lock and key—the virus has the key, and it’s looking for the right locks. We looked across our databases and effectively narrowed it to three types of cells in the tissues of the upper respiratory airways, lungs, and intestine.

But there was a twist. We saw the receptors the virus was going after were part of the body’s anti-viral defense pathway. That’s interesting, and a little scary. In one way, these receptors could help us to protect our tissues—but they also might be providing extra targets for the virus to go after.

This work shows how quickly science is evolving. Within two months, we had a study and then validation from other groups, something that might normally take two to three years. People are breaking down barriers and opening doors. The challenge is how to sustain this new way of doing science.

— as told to Helene Ragovin