The Institute for Global Leadership, The Fletcher School, and the World Peace Foundation extend outreach with a new conversation series on July 24 and a podcast series

In an effort to address questions of race, justice, and peace, the Institute for Global Leadership (IGL), The Fletcher School, and the World Peace Foundation have launched several initiatives to bring these issues to a wider audience.

IGL and Fletcher are beginning a series of public online conversations called “Global Perspectives on Race, Justice and Equity,” which will feature policymakers, public intellectuals, scholars, writers, and activists.

The series aims to contribute “to the long-overdue national and global conversation about historical and persistent racial injustice and inequality,” said Abi Williams, F86, F87, director of IGL and professor of the practice of international politics at Fletcher. “The dialogue on these vital issues will challenge everyone to take action to address the long and destructive legacy of racism, and promote a more just and equitable world for all.” 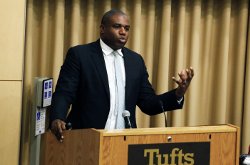 David Lammy speaking at Tufts. Photo: Jeremy M. Gumener
The inaugural conversation, on the topic “Black Lives Matter, Justice and the UK,” features David Lammy, a UK Member of Parliament and Labor Party shadow secretary of state for justice, and will be moderated by Williams. It will take place on Friday, July 24 from 1 to 2 p.m. ET on Zoom. To sign up, go here.

The World Peace Foundation, in partnership with African Arguments and IGL, has started a new podcast series, “African Voices, African Arguments,” which features African scholars, writers, policymakers, and activists on issues of peace, justice, and democracy.

In the first podcast of the series, World Peace Foundation executive director Alex de Waal, who is also a research professor at The Fletcher School, interviews Abdul Mohammed, one of Africa’s leading public intellectuals. For the last ten years Mohammed has been chief of staff and senior political advisor to the African Union High-Level Implementation Panel for Sudan and South Sudan, and the Horn of Africa. Learn more about the podcast and listen here.