Not many dogs contract this infection—and many of those that do die. However, intensive care at the Foster Hospital saved two pets with severe tetanus in less than a year 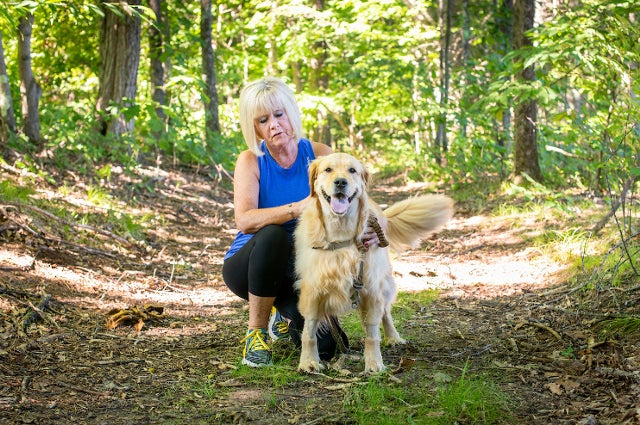 Many dogs seem programmed to roll around in anything smelly—and the smellier, the better. Brooklyn, a three-year-old golden retriever, took this animal instinct to a whole new level in June.

While off leash during a walk in the woods one morning, Brooklyn decided to scratch her back using a dead porcupine. Owner Jayne Smith and her husband spent the rest of the day removing quills from the dog’s cheeks, neck, and spine.

Normally, that would have been the end of the story—the punchline to a somewhat silly, if stinky, cautionary tale for fellow dog lovers.

Although tetanus is caused by exposure to bacterium called Clostridium tetani, it’s nothing like your typical bacterial infection. That’s because it’s not the bacterium that sickens the body, but instead the toxin it produces.

This poison attacks and impairs nerves so that the body’s muscles clench and cannot relax. Tetanus causes uncontrollable and very painful muscle contractions all over the body, particularly in the jaw and neck. These muscle spasms can interfere with breathing, which can lead to death.

Spores of Clostridium tetani are commonly found in soil and dust throughout the world. These spores are harmless if they come into contact with the skin or are ingested in food or water. But if they find a low-oxygen environment in which to grow, the bacterium will start multiplying and producing the toxin.

This can happen if spores enter the body through a deep or puncture wound from a contaminated object. That’s why people are routinely vaccinated against tetanus as children, and why we’re also advised to get a booster shot if we step on something sharp, such as a nail.

Like people, horses also are very susceptible to tetanus, and both an equine tetanus vaccine and antitoxin treatment are available. But tetanus is so rare in cats and dogs that there’s no vaccine or treatment for pets. Small-animal veterinarians can go their whole careers without ever seeing a case.

From Bad to Worse

Not surprisingly, tetanus was not on anyone’s radar when Brooklyn first became ill about a week after the dead-porcupine escapade.

Concerned about Brooklyn’s vomiting and lack of energy, Smith brought her to an emergency clinic. She was diagnosed with an infection of unknown origin and prescribed an antibiotic.

However, back home, Smith said, they soon couldn’t get Brooklyn to eat. The emergency clinic veterinarian urged Smith to head to Tufts immediately.

On arrival for triage at the Henry and Lois Foster Hospital for Small Animals, Brooklyn looked very ill, said emergency and critical care veterinary technician Katelyn Maclean. “She followed me around with her eyes, and it seemed like she wanted attention. But she wasn’t willing to move to obtain it,” said Maclean. “That’s pretty abnormal for a young golden retriever—they are usually pretty rambunctious even when sick.”

While Maclean was helping position Brooklyn to be X-rayed to check if she had eaten something dangerous, she noticed that the dog seemed uncomfortable and stiff in her front end.

She also noticed something slightly off about Brooklyn’s face. The dog’s lips curled back slightly, giving her the faintest hint of a smirk.

Maclean wondered if Brooklyn could be developing the telltale “sardonic grin” caused by facial-muscle contractions that signified tetanus. 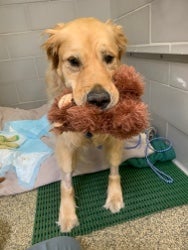 Brooklyn recovers at the Foster Hospital. “I just hope that Brooklyn’s story is able to help other pets by making people realize that we can save dogs with tetanus if we act quickly,” said Katelyn Maclean. Photo: Katelyn Maclean
By the time emergency and critical care resident Ian DeStefano arrived the next day, it was obvious that Brooklyn indeed had tetanus.

DeStefano couldn’t get over the coincidence. Just nine months earlier, the veterinarian had treated tetanus in Murray, a four-year-old yellow lab who had developed the infection after breaking a toenail.

By the time Murray arrived at the Foster Hospital, the dog had textbook signs of full-blown tetanus. Stiff as a board, Murray was trapped in a sawhorse stance—all four legs sticking straight out—and his chest wall was paralyzed from muscle rigidity. As the dog clearly soon would be unable to breathe, DeStefano immediately placed a breathing tube in and started him on a ventilator.

Despite having a one-in-ten chance of survival, Murray today is home and completely back to normal—but that was after several weeks of 24/7 intensive care not available at most animal hospitals.

Brooklyn’s owner said DeStefano warned that her pet, although not yet as severely affected by tetanus, could have a similarly long road to recovery.

Tetanus patients almost always get worse before they get better, he explained. The toxin has already infiltrated the nerves for symptoms to have begun, so affected animals need lots of time and supportive care as their body works to flush out the toxin and grow new nerve endings.

But DeStefano said he believed the team could save Brooklyn if they took quick and aggressive action. “She was so young, and I wanted to give her every opportunity to get well,” said Smith, who agreed to treatment.

All Hands on Deck

The veterinary team started by surgically removing the source of the bacteria producing the toxin—a quill embedded in Brooklyn’s back.

Brooklyn also received the equine antitoxin therapy to bind any amount of toxin in the bloodstream to hopefully help halt any progression. (Although its efficacy in pets is unproven because of the rarity of canine tetanus, “we know from experience and published studies that it’s relatively safe in dogs,” DeStefano said.)

The clamped-down teeth seen in lockjaw render pets unable to eat or drink, so Brooklyn had a feeding tube inserted to ensure she could get enough nutrition, said DeStefano. She also had a tracheostomy tube inserted in her neck to bypass her spasming upper airway, allowing her to breathe.

However, ultimately, for a pet to survive tetanus, “the nursing care is absolutely paramount,” said DeStefano. “It’s 90 percent of the battle.” 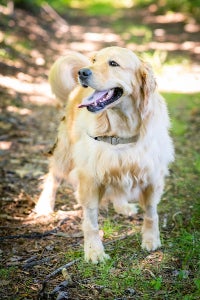 “Brooklyn has so much love for life, and we got her back to that,” said Katelyn Maclean. Photo: Alonso Nichols
Maclean said Brooklyn benefited from all the lessons they’d learned from nursing Murray. “It takes every bit of skill that you have to take care of these dogs,” she said.

Bright light, vibrations, and sudden sounds can trigger full-body muscle spasms in tetanus patients, so Brooklyn recovered on a large cushioned dog bed in the dark, while hospital staff tiptoed past.

Her growing muscle rigidity made it uncomfortable to stand or bend her legs. So, every few hours, veterinary technicians would carefully massage Brooklyn and change her position to prevent pressure sores and pneumonia.

The veterinary technicians also vigilantly monitored Brooklyn’s comfort level. Working with the veterinarians, they adjusted her medications to soothe the painful whole-body stiffness and relieve any muscle spasms triggered by inadvertent noise.

“Pretty much every nurse in the ICU took care of Brooklyn at some point,” said DeStefano.

After about four days of worsening symptoms, Brooklyn finally began to improve. On day twelve, she headed home.

“It’s an absolute miracle. She’s back to her old self,” reported Smith in late July. “We’re back out walking the trails together again, though I watch her a lot more closely now.”

Smith said she wished she could have met all the staff inside the Foster Hospital, which had closed its doors to visitors to help protect staff and clients from COVID-19.

“I know there are many more people that took such good care of Brooklyn who I don’t even know about,” she said. “I hope they’re all proud of themselves. She means the world to me.”

Maclean said that seeing Brooklyn roll over for belly rubs at her recheck appointment reignited all her passion for job. “Brooklyn has so much love for life, and we got her back to that.”

“I just hope that Brooklyn’s story is able to help other pets by making people realize that we can save dogs with tetanus if we act quickly,” said Maclean. This September, she will present a case report on Brooklyn at IVECCS, the Veterinary Emergency Critical Care Society’s annual conference, to teach other veterinarians and veterinary technicians about everything that made Brooklyn’s case so successful.