Brewing Coffee for the Greater Good 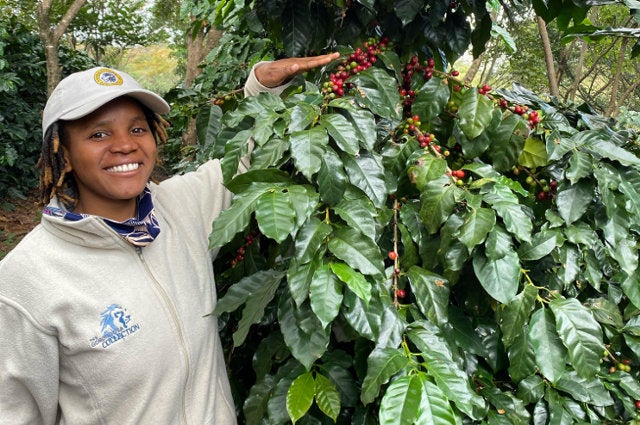 Can you make the world a better place with a cup of coffee? Eric Wilburn, E12, is hoping so.

He is helping lead an experiment in social entrepreneurship—having impoverished farmers grow coffee in Gorongosa National Park in the southern African country Mozambique, which is then roasted and sold as a premium coffee.

Wilburn oversees international roasting, distribution, and marketing for Gorongosa Coffee, which offers its premium blends for mail order in the U.S. and Europe. Although “coffee is a very crowded space,” as Wilburn said, Gorongosa Coffee has its selling points. For starters, it’s the first and only specialty coffee from Mozambique, and its coffee is in the premium sector—the highest quality sold, he said.

But even more importantly, Wilburn said, is that this effort “really has the ability to fundamentally change the way that the national park is getting its funding.” All the profits go back to the nature preserve where the farmers live, supporting the national park and its biodiversity efforts, and providing money for education for local girls as well as for health care and water and sanitation projects.

He’s hoping that the coffee business will be a sustainable financial source for the national park—a model, in fact, that “could essentially completely change the way that conservation and human development is being funded around the world,” he said. 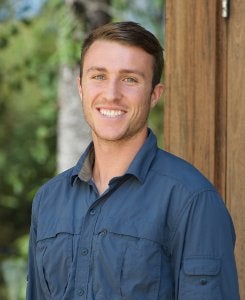 “If we can do it in Gorongosa National Park, one of the most challenging places on earth, and create a sustainable and equitable model, there is no reason why we can’t do this all over the world,” said Eric Wilburn.
It’s a bit of an unlikely path for Wilburn, who graduated with a degree in civil and environmental engineering, and who had never been out of the country until after college. Inspired by a couple of classes at The Fletcher School and the activism of some of his classmates at Tufts, though, he signed up for the Peace Corps after graduation, and was assigned to teach in Mozambique.

His best friend in the Peace Corps ended up staying in Mozambique, becoming head of sustainable livelihoods in Gorongosa National Park, and Wilburn returned to help him annually to work on community conservation projects.

The park, with some 1,500 square miles of forest and savannahs, had been the scene of intense fighting in the sixteen-year civil war between the Mozambique government and the insurgent group RENAMO. The war ended in 1992 and left the area almost entirely devoid of wildlife.

But by 2010 the plant and animal life slowly made a comeback, and the park’s success was popularized by naturalist E.O. Wilson’s 2014 book A Window on Eternity: A Biologist’s Walk Through Gorongosa National Park. Several thousand poor farmers who lived within the boundaries of the park were encouraged to remain as long as they farmed sustainably.

The Mozambican park warden thought areas of the park near Mount Gorongosa, which rises out of the rainforest, might well support coffee growing, and a colleague in neighboring Zimbabwe offered coffee seedlings. The initial batch in 2015 proved a perfect fit for Gorongosa, and farmers planted tens of thousands of seedlings.

In 2019, the first bumper crop of coffee beans came in, and with it the opportunity to start a business selling the coffee worldwide. Wilburn’s former Peace Corps friend was named to run it, and signed up Wilburn as chief operating officer of the venture last summer. It’s not his first venture though—he’d been involved with a couple of other social entrepreneurship startups since leaving the Peace Corps.

The business was just starting to scale up marketing efforts in the U.S. when the pandemic hit in March, and COVID-19 brought an abrupt halt to the tourism business that also funds the park. Besides the pandemic, and the lingering effects of the devastating 2019 Cyclone Idai, local politics is creating difficulties, as remnants of RENAMO still live in the area and fighting erupts sporadically.

But as a mail order product, there’s been steady business, Wilburn said—and he is optimistic that this venture could have a lasting impact. Shifting away from being dependent on philanthropy and aid organizations would bode well for sustainable development, he said.

“What would the world look like if more for-profit organizations were owned by nonprofits, and were dedicated to serving and funding the mission of that nonprofit?” he said. “This is a model that we are just so excited about, because if we can do it in Gorongosa National Park, one of the most challenging places on earth, and create a sustainable and equitable model, there is no reason why we can’t do this all over the world.”