Yes, the Air Was Better During Lockdown 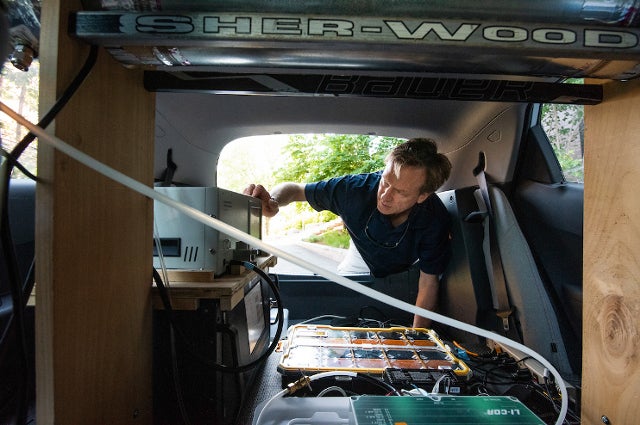 If you thought that the air quality improved during the initial COVID-19 lockdown, you were right. A recently published Tufts-led study found a direct connection between the stay-at-home orders following the COVID-19 outbreak this spring with improved air quality in Somerville, Massachusetts, neighborhoods located next to Interstate 93 and busy side roads.

The team—two School of Engineering faculty and two Tufts graduates—correlated dramatic drops in traffic along stretches of Interstate 93 and neighboring Routes 28 and 38 with cleaner air in areas where car and truck exhaust are the dominant sources of air pollution.

The study, supported by the City of Somerville, noted that “dramatic reductions in traffic afforded the opportunity to quantify improvements in air quality,” reported authors Neelakshi Hudda and John Durant, in the Department of Civil and Environmental Engineering, and Matt Simon, EG17, an engineer at the Volpe National Transportation Systems Center, and Allison Patton, EG14, a staff scientist at the Health Effects Institute.

“By quantifying impacts of traffic emission on the local community, the results are useful for city and regional planners as they consider transportation scenarios to reduce air pollution exposures, such as increased use of electric cars, alternative commuting and transit options such as bike lanes, and development of low emission zones similar to those successfully adopted in Europe and elsewhere,” they reported.

Looking to a future under increased climate change threats, “the challenge for air quality managers is to develop policies and incentives to reduce the use of fossil fuel burning vehicles in urban areas,” they concluded.

The findings were published in a special issue of Science of the Total Environment focused on COVID-19 and its impact on the environment. 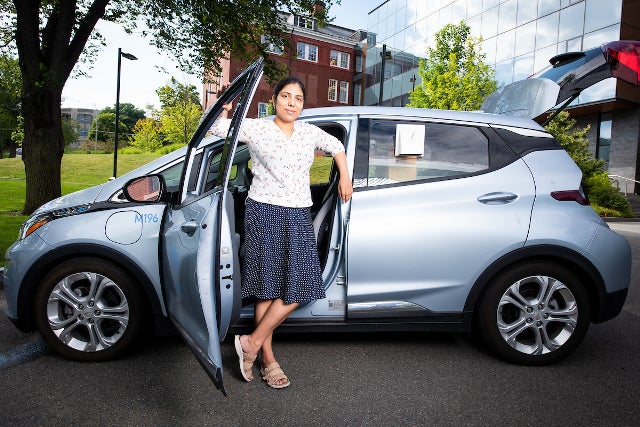 “If we can . . . point to this collective lived experience of cleaner air that we now share, then maybe we can bring in minor changes in people’s lifestyles or mindsets,” said Neelakshi Hudda. Photo: Alonso Nichols
Somerville, a host community for Tufts, is the most densely populated city in Massachusetts. Three major highways—I-93 and state routes 28 and 38—together carried about 230,000 vehicles per day through Somerville in 2019. The city is ranked in the 94th percentile for traffic proximity and volume in the state.

Beginning on March 24, when Governor Charlie Baker ordered non-essential offices and businesses to close, and continuing through May 14, the Tufts team drove the Tufts Air Pollution Monitoring Lab, an electric car outfitted with rapid-response instruments, and monitored air quality along an almost ten-mile route, which included a variety of streets in Somerville.

The team went out on fifteen days for three-to-four hours per day during the economic shutdown period to measure air quality over a range of different meteorological conditions.

A byproduct of the internal combustion engine, exhaust pollutants include carbon monoxide, nitrogen and sulfur oxides, unburned hydrocarbons, and other organic compounds. All are associated with health risks, including asthma, heart disease, and lung cancer. Carbon dioxide, which is also abundant in vehicle exhaust, contributes significantly to global warming.

What the Team Found

The Tufts team measured specific indicators of emissions including black carbon, or BC, and ultrafine particle number concentration, or PNC. Ultrafine particles are of particular interest because they are abundant in vehicle emissions and due to their small size—less than 100 nanometers—they are inhaled deep into the lung and nose, which can lead to health problems.

On urban roadways in Somerville, the Tufts team found that both median PNC and BC concentrations during the lockdown period were “substantially lower than pre-pandemic levels: 60 to 68 percent lower for PNC and 22 to 46 percent lower for BC, depending on the road class,” they reported. Using data collected by the state, the team calculated that the mandated shutdowns and stay-at-home advisories reduced daily car traffic by 71 percent and truck traffic by 46 percent.

The findings continue a long track record at Tufts of studying local air quality and raising concerns about its implications for public health. The Tufts team has been monitoring air quality in Somerville for more than ten years and has built up strong historical data around the impacts of I-93.

School of Engineering research, for instance, has developed empirical models that predict concentrations of ultrafine particles in Somerville, Chelsea, and Boston’s Chinatown, and investigated how traffic-related air pollution disperses around the Central Artery Tunnel as it passes under Boston, and impacts South Boston, Chinatown, and the North End.

When the pandemic lockdown happened, Durant and Hudda immediately recognized it as an unprecedented opportunity to enrich their research on how traffic patterns are tied to clean air.

“It called out to us as a natural experiment,” said Durant, an associate professor of civil and environmental engineering. “Now we have a really interesting story to tell, and we believe it has enormous relevance to the decisions we make now—and long after the pandemic is over.” 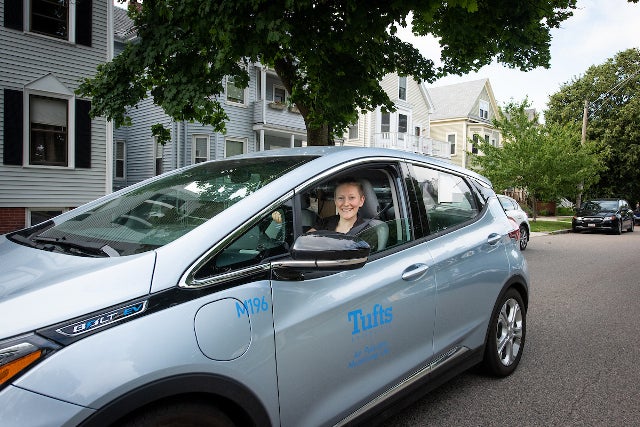 Environmental engineering student Ida Weiss, E21, drives around gathering data in the Air Pollution Monitoring Lab. Photo: Alonso Nichols
However, his real fear, he said, is that the United States will revert to former habits of relying on gasoline-fueled cars as the principal means of transport over, say, public transportation, electric vehicles, and bicycles.

“We’re accelerating climate change so rapidly that within the next fifty to one hundred years, all the ice sheets in Greenland and Antarctica could be gone, causing sea-level rise and many other problems,” he said. “And then, we’re going to look back and say: during the pandemic our CO2 emissions were finally coming down for the first time in years, and we had a chance to envision a different future and to make some corrective actions. But we didn’t learn from the pandemic.”

Hudda, a research assistant professor, put the Tufts study into a larger context as well, noting research that showed if the lockdown condition continued for a whole year, “there would be about a five percent decrease in global CO2 emissions, and, if this recurred every year for the next several decades, we would limit global warming to the goal of 1.5ᵒ C.” (The Intergovernmental Panel on Climate Change (IPCC), the United Nations body for assessing the science related to climate change, has stated it is vital to maintain global temperature increase below 1.5° C to prevent the extreme changes—including drought and loss of coastal communities due to rising seas—that threaten habitats and human adaptability.)

But she is more optimistic that lessons from the pandemic can lead to change.

“The pandemic shutdown was a great opportunity to gather that data and tell people exactly how much better or worse the cars and all that driving is making our lives,” Hudda said. “I am hopeful we can capitalize on it going forward. If we can speak to it, and point to this collective lived experience of cleaner air that we now share, then maybe we can bring in minor changes in people’s lifestyles or mindsets. We have before us a great opportunity to make people realize that sustainability is about living with less.”

For now, Hudda and Durant take comfort knowing that a 71 percent drop in cars and 46 percent drop in trucks leads to a more than 50 percent reduction in traffic-related air pollution in urban areas.

“The challenge now is to sustain these improvements long into the future,” they said.