Tags: Education , COVID-19 , School of Arts and Sciences , School of the Museum of Fine Arts
Share 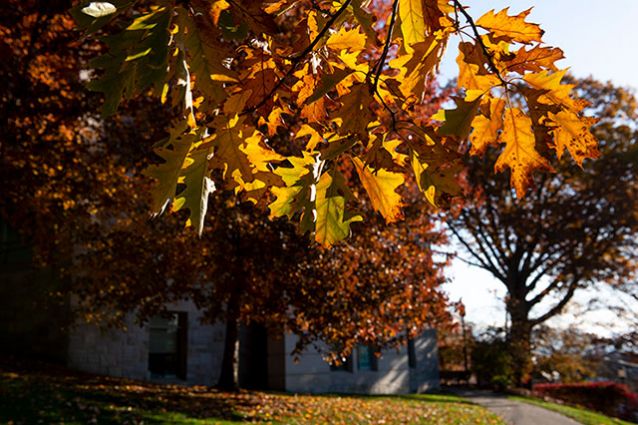 With the fall semester approaching, faculty members at the School of Arts and Sciences and School of the Museum of Fine Arts (SMFA) at Tufts are putting the finishing touches on their class materials and preparing for a mix of in-person and virtual students.

Earlier this summer, Tufts Now spoke with several instructors who offered a peek into how they are innovating for fall to account for COVID-19 restrictions. Since then, even more faculty have nimbly adapted to a changing national climate and incorporated not only virtual education technologies, but also anti-racism efforts into their coursework.

As part of this continued series, keep reading for a sample of what undergraduate students can expect in academics this fall.

A relative newcomer to Tufts University, Parayno became the director of the Asian American Center in 2019, and this fall he’s teaching a class called Asian Americans in the Media through the Experimental College. He’s also a third-year doctoral student at the University of Massachusetts Boston, studying higher education.

“Though the Asian American Center focuses on Asian and Asian American students, it really is for all students to have a better understanding of our role in the community. This class is a fantastic opportunity to engage with students with whom I might not otherwise engage at the center,” he said.

Parayno pointed out how this class is particularly relevant now, given the national climate and this “watershed moment of understanding what race and racism looks like.” He said it’s important for all Tufts students to engage not only with histories that are similar to their own, but to ones that are different.

Parayno said he loves pop culture, but much like with food, our media “diet” needs scrutiny. The course aims to ask students to be critical about what's being put out in the media and whose gaze it’s for, “because too often the gaze is for the white audience,” he said. “What does it look like when more people of color and more Asian Americans control the narratives, and how does that compare now to the things that you might've seen in the '70s or even in the '90s? This course tries to provide that landscape for the students.”

Eulogio Guzmán and Peter Scott
Senior Lecturer and Chair, Visual and Material Studies, and Professor of the Practice, respectively
SMFA at Tufts 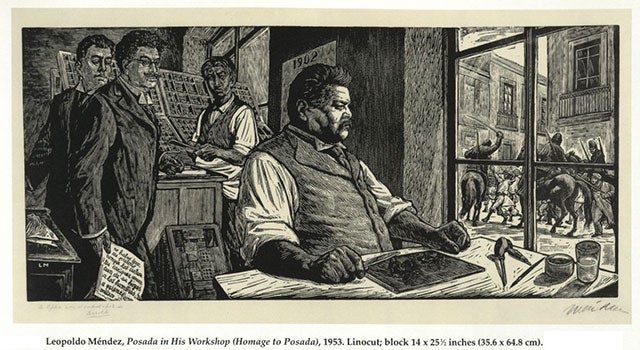 Famed printer Jose Guadlupe Posada, an icon in Mexican popular art, is pictured watching a group of protesters from his studio in this print by Leopoldo Méndez.

How do you make the 16th century relevant to present-day students? Through imagery, said Guzmán, an art historian and former architect and archaeologist, who is co-teaching a class with Scott called The Dynamic Printed Image: Visualizing Explorations and Collaborations in Unprecedented Times.

Scott called it a studio base print course with a historical kick, in that students will make woodcuts and learn about approaches to relief printing, but the projects will be coming out of art historical case studies where printed images have been appropriated and transformed in unexpected ways.

“I’m absolutely thrilled about the way in which images can completely both capture a moment and also transcend it, and I’m fascinated by the social process or production that informs that,” said Guzmán. “All of the courses I teach are speaking about agency, artist empowerment, and the ways in which art is a rebellious act.”

He pointed out that next year marks the 500th memorialization of the conquest of mainland Mexico, which he called “the spearpoint for conquest of the Americas.” It’s often seen as a time of death, destruction, plagues, but it was also defined by transglobal exchanges.

“This so-called age of exploration and colonization by Europe of the new world is concurrent with the birth of printing and publishing. The level of dissemination is not unlike our internet today,” said Scott. “The role of the history is really relevant, and what I’m interested in is how you can take these things and put them in a contemporary context.”

Guzmán said the present COVID-19 and racism crises has caused him to reflect about how images “have always presented an opportunity to transcend depths of despair into a brighter future and to leave the moment that we’re in.” In that spirit, he and Scott both view this class as an opportunity to invert themselves and be students who learn from each other alongside their enrolled students.

This fall, Ruane is teaching Calculus 1—a course that usually has about 300 students, and one that she has taught online for the past six years. She has been experimenting with virtual live sessions for problem-solving that were so successful with her summer students, the Math Department is incorporating them into the fall curriculum, as well.

“We’ve been doing live hour-long sessions with groups of eight to ten students. The students know which problems they're supposed to be working on, they bring their questions, and that starts the discussion,” she said. “I’m the moderator and scribe, but they're running the session, essentially. Everybody knows that they will be called on at least once, so that's the expectation going in.”

Over the years, Ruane has created a sizeable library for asynchronous learning consisting of topic-specific videos between six to ten minutes long. They aren’t a replacement for the class’s weekly lectures, during which Ruane and two other faculty members—Boris Hasselblatt and Alex Hening—outline the “overarching picture of where we are in the calculus story each week,” said Ruane. Instead they’re designed to help students take a deeper dive into different concepts as they complete coursework on their own time.

Intro to 3D Strategies offers students the chance to learn from a group of talented faculty members and work with materials such as metal, ceramics, fabrics, and wood. Instruction will be offered both remotely and one-on-one when needed, and students will be able to make appointments to spend time in the 3D studios to create and complete work.

“It's going to be an exciting challenge, especially for students who are used to modes of working. This is going to push them outside of that comfort level,” said Crane. “We’ll offer up some surprise ingredients or expectations halfway through the week to shake it up. It's important to keep the brain active and not stagnant. This class will provide a platform for new and innovative ways of making and thinking.”

The class will be organized around weekly challenges where students will be required to think outside the box, said Redelman Diaz. Students will receive a kit with supplies, but they’ll also be asked to use found materials around them, like cardboard, rubber bands, or food containers.

Like many classes offered this fall, the thread of racial equality will be woven into Intro to 3D Strategies. “Fiber has been a marginalized area within fine art until recently. There’s a rich and complicated history in terms of its relationship to gender and race, and I’m excited to bring it to students as a physical medium and a conceptual framework,” said Fields.

Fabrizio said the class is flexible so students can make what they want of it and redefine what three-dimensional art is. “Regardless of who's teaching the assignment each week, students have access to four creative people and can tap into their expertise in that medium or mode of working."

Geology is a visual and tactile science, said Gardulski. Most semesters, she kicks off her class—called The Dynamic Earth—by bringing in hundreds of pounds of rocks and mineral samples for students to pass around and work with. Obviously, with COVID-19 social distancing restrictions, this interactive model had to be modified for fall.

“I still plan to bring hundreds of pounds of rocks into the classroom, but instead of having 50 or 60 students in front of me, I'm going to divide the class into thirds and have one third come on Monday, another on Wednesday, and another on Friday,” she said. “Students will be spaced apart and wearing gloves in addition to masks, so they can handle the rocks with minimal chance of contamination.”

This class has a lab component, where over the course of 10 meetings, students will work with rocks, maps, and diagrams as they collaborate on a geologic problem and discuss solutions. “One of those sessions will be a field trip to some outcrops of rock right on campus, where we’ll make observations and introduce students to the geology of the area where they'll spend the next few years of their life,” Gardulski said.