The effects of the atomic bomb are still felt in Japan and the world, 75 years later 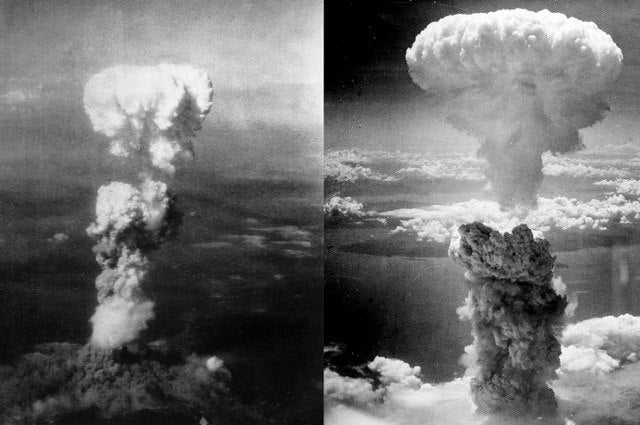 August 6 marks the seventy-fifth anniversary of the atomic bombing of the Japanese city Hiroshima. It was the first time nuclear weapons had been used, followed three days later by the bombing of Nagasaki. Deaths from the bombings are estimated to be around 150,000.

What is the legacy of the atomic bombings and how are they viewed in Japanese culture? Three Tufts professors gave us their takeaways: Hosea Hirata, a professor of Japanese literature; Susan Napier, Goldthwaite Professor of Rhetoric in the Department of International Literary and Cultural Studies, who focuses on Japanese anime; and Abi Williams, F86, F87, director of the Institute for Global Leadership and a professor of the practice of international politics at The Fletcher School.

The world should not forget the devastation nuclear weapons can wreak. “Seventy-five years after the atomic bombings of Hiroshima and Nagasaki, there is limited global public awareness of the risks posed by nuclear weapons,” said Williams. “There is an urgent need to increase public awareness of these risks and to mobilize public support for decisive action on arms control, non-proliferation, and disarmament. Civil society has an important role to play in raising awareness and exerting pressure for action. Nuclear weapons are an existential threat to the world and we must not become complacent about this peril.”

In Japan, many people are uninterested in the bombings. Hirata noted that in 1983 a fifteen-volume anthology of Genbaku bungaku—atomic-bomb literature—was published in Japan. It contained works of some major novelists, poets, and essayists dealing with the bombings of Hiroshima and Nagasaki.

“When the editors began working on the project, the most difficult issue they faced was finding a publisher, because people in the publishing business knew that atomic-bomb literature would not sell,” Hirata said. The takeaway, he said, is that while many writers have been writing about the bombings, “few readers are reading them.”

The bombings had distinct effects on Japanese popular culture. “Godzilla is absolutely an atomic bomb document,” said Napier. “It’s absolutely a reworking—a reprocessing of the atomic bombing—instead of having a bomb come out and destroy Tokyo, you have this monster from the deep who is radioactive and is brought out from American nuclear testing.”

She pointed to a “very evocative and beautiful scene when you see a hospital with some of Godzilla’s victims, which is heartbreaking. We see again what’s happened to these people who have been traumatized and devastated by this nuclear creature, and then we hear a beautiful song and young women singing their hearts out. It’s just really moving and it gives you a sense of the human cost of these gigantic, enormous weapons, be they scaly monsters or in fact an atomic bomb.”

The war deeply influenced anime through the lens of legendary animator Hayao Miyazaki. Miyazaki, co-founder of the influential Studio Ghibli, was four years old when the war ended, and “was certainly aware of the war because his town, which is forty miles outside of Tokyo, was bombed during the last few days of the war,” said Napier. “He remembers his family escaping in a very small vehicle going through the burning streets, and he remembers a woman with a baby asking to get into the car and his parents saying no we can’t do this. In his memory, he keeps thinking ‘we should've done something’.... He and his older brother—they were both little kids— both felt like they should’ve told their parents to stop.

“He has this belief that children should be the conscience of the world, and that children can see things more innocently and more directly, so he often has children dealing with horrendous, cataclysmic events. It can be terrifying, but they rise to the challenge. They know there’s no other way out. He has movies where catastrophe is very overt, and there we do see very obvious allusions to World War II.”

Despite the bombing, the view of America wasn’t negative. “The image of America has certainly changed since 1945,” said Hirata. He said what is amazing about reading Black Rain, a popular novel from the 1960s about the Hiroshima bombing by Masuji Ibuse “is that the reader does not sense much anger against America. Rather, the protagonist’s anger is directed at Japan’s military government,” said Hirata. “That was partially a result of Gen. Douglas MacArthur’s strategy to rule postwar Japan. Definitely the devastated Japanese people felt angry. MacArthur’s strategy was to turn the blame to Japan’s military government and not to the Allied occupying forces.

“Another pacifying strategy that MacArthur employed was to censor anything that smelled of militarism from Japanese popular culture and promote Hollywood movies and American pop culture like jazz. Until 1964, Japanese people were not allowed to travel abroad for leisure. So, in people’s minds, America became a dream land through the images Hollywood created. But by the end of the sixties, America became the target of political anger due to its involvement in the Vietnam War.”

The bombings led to a United Nations focus on eliminating use of nuclear weapons. “The catastrophic bombings of Hiroshima and Nagasaki provided the impetus for the UN’s work to prevent the use of weapons of mass destruction, especially nuclear weapons,” said Williams. Nuclear disarmament was the subject of the first General Assembly resolution in 1946. The UN has played a significant role as a negotiating forum, a norm-setter, and an implementing agency to alleviate the dangers posed by nuclear weapons. The UN Secretary-General continues to promote and defend the goal of a world free of nuclear weapons.”

Jeremy Goldstein can be reached at jeremy.goldstein@tufts.edu.