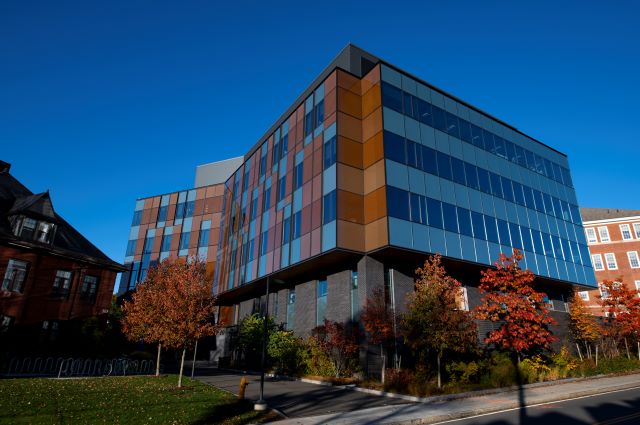 The Tufts University School of Engineering has reaffirmed the crucial importance of diversity, equity, and inclusion in a new statement that lays out a plan of action to combat racism and other forms of discrimination at the school.

“We stand in partnership with all schools at Tufts as we address structural racism at the university,” said Dean Jianmin Qu. “As an engineering school, we have long recognized the importance of creating an environment that welcomes and supports all who have been historically under-represented in science, technology, engineering, and mathematics, or STEM, fields.”

The statement, Commitments to Diversity, Equity and Inclusion (DEI) in STEM, aligns with the university’s collective efforts to address systemic racism that grew out of an observance of Juneteenth. The School of Engineering is committed to, among other steps:

Many of the plans involve multi-year efforts.

The action plan will be incorporated into undergraduate and graduate programs and reinforce  the school’s sense of responsibility to shape a better future. “Engineering can and should serve as an engine for good not only for technological advancements but also for building a more just, equitable, inclusive, and diverse culture that impacts the world beyond its disciplinary boundaries,” the statement says. Given that mandate, “The School of Engineering at Tufts is fully committed to do its part to contribute to this transformative societal change.”

Qu said the DEI statement works hand in hand with the first theme of the school’s 2019-2029 strategic plan, “An Engine for Good,”  by reiterating core values pivotal to the future impact and vitality of the school and to the STEM disciplines it supports. “We have reached a historic milestone toward achieving a more gender-balanced school: Women have accounted for close to fifty percent of the last several incoming undergraduate classes,” Qu said. “This progress is one step toward achieving a truly diverse and inclusive community.”

Karen Panetta, professor of electrical and computer engineering and dean of graduate education, said the action is reinforced by existing initiatives such as the FAST-TRAC Scholarship Program, a professional development program that also provides scholarships for underrepresented students. The program, launched with a $1 million grant from the National Science Foundation, encourages undergraduates to continue on to master’s degrees and, in the long term, consider earning a Ph.D.

“Students earning STEM degrees are often pragmatic; they want to find a job and start making a living,” said Panetta. “We try to help them see the bigger picture. Most of our students are able to continue their studies and work with companies on real-world projects. They have job offers before they graduate. A whole new wave of talented engineers will come into the workforce, we believe, by bringing ideas and resources to address the pressures and expectations faced by our underrepresented students.”

The school’s new action plan was developed under the leadership of Chris Swan, associate professor of civil and environmental engineering and dean of undergraduate education at the School of Engineering.

He said one key concern on which Tufts will continue to focus is ensuring that students from underrepresented groups remain in engineering through graduation.

Overall, the school has undergraduate retention and completion rates higher than the national norm of 60 to 70 percent.  At Tufts, more than 92 percent of all undergraduate engineering students complete their studies in four years (compared to six years for the national statistics), though it’s slightly lower -- approximately 86 percent -- for Black students, Swan said.

Strong retention statistics are important benchmarks of success, said Swan, and he cites the importance of initiatives already in place, like the Bridge to Engineering Success at Tufts (BEST) program, run by the Center for STEM Diversity and now more than 10 years old. The BEST program helps students succeed by providing group tutoring, mentoring, and community gatherings and “has been found to benefit these students tremendously,” he said.

Still, Tufts aims to do better. “With respect to growing a diverse student body, the school will amplify support, both academic and social, to all underrepresented students to enhance the overall Tufts experience,” he said.

The BEST program currently provides support to approximately 3 to 4 percent of an incoming engineering undergraduate class, Swan said. The school hopes to reach a larger group of students by extending the program, increasing service learning that explicitly connects curriculum to communities, and broadening the participation of underrepresented groups in school research and other efforts that “expand the meaning of engineering beyond that of a technically focused discipline to a transformative pursuit,” he said.

Swan added that much needs to change to boost engineering’s role in building a just society.

“The biggest change we need is cultural,” he said. “We must acknowledge that many STEM fields have not been welcoming and supportive to students and researchers from groups traditionally underrepresented in STEM. Those who persist and remain in STEM fields often endure systemic bias and discrimination. The acceptance by engineers that the current processes and practices is the way to study, do your work, and live your life needs be shaken to its core.”

It is engineers, he said, whom the world will look to for holistic solutions that integrate their technical prowess with an understanding of the social, economic, and cultural implications of their work. Toward that end, the School of Engineering has been moving towards educating the whole student for some time and plans to create a core group of  courses that will have lectures and material on topics related both to engineering and to diversity, equity, and inclusion.

While long-term and systemic change will take time, Swan said he was encouraged by the way the current set of commitments ensures momentum by creating systems and groups with “long life spans,” such as a standing committee on DEI in the school, which will be at the same level as the school’s curriculum and academic standing committees.

“Once this structure is established,” he said, “the systemic development, implementation, and assessment of DEI efforts will become commonplace and the cycle of injustice and discrimination can be broken.”