Author Susan Napier on the Beauty of Transience

In our series with writers on reading, the professor and author of “Miyazakiworld: A Life in Art” talks about books that inspired her 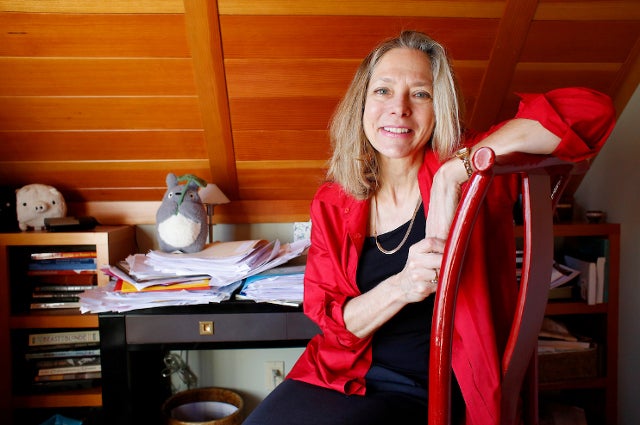 Bookish is an occasional Tufts Now series of interviews with authors from the Tufts community. For more book suggestions, see “Summer Book Recommendations.”

Thinking and talking about books “is one of the great pleasures,” said Susan Napier, Goldthwaite Professor of Rhetoric in the Department of International Literary and Cultural Studies, who studies Japanese culture and literature, focusing on anime.

Napier, who has taught at Tufts since 2006, is the author of five books on Japanese culture and anime, most recently Miyazakiworld: A Life in Art, focusing on the films of Hayao Miyazaki, co-founder of the famed Studio Ghibli. She reads widely—from Haruki Murakami to P.G. Wodehouse—and was inspired as a young reader by The Lord of The Rings, which still is a lodestar for her.

We caught up with Napier earlier this summer when she was in Maine to talk books and inspiration.

Susan Napier: I just finished reading The Mirror & The Light, the last of Hilary Mantel’s trilogy about Thomas Cromwell. Now I’m reading Breasts and Eggs, by Japanese woman writer named Mieko Kawakami. It definitely gives you a sense of some really interesting female preoccupations. It’s such a woman’s book, with some really beautiful writing.

It sometimes feels almost claustrophobic, but then you’ll have these beautiful lyrical moments, like when one woman takes her niece on a Ferris wheel in Tokyo, and they’re up above the sky looking out on this purplish twilight sky. She feels like she’s inside a giant purple grape. I thought: That sounds like something out of haiku.

Listen to Susan Napier being interviewed about her favorite books.

I’m also enjoying The Shadow of the Wind, by Carlos Ruiz Zafon. It’s set in Barcelona right after the war. If you’ve read Umberto Eco’s The Name of the Rose, or any Jorge Luis Borges, it’s got a similar fascination with books. When he’s ten years old, a boy is brought by his father, a book collector, to a very secret bookstore where he’s allowed to choose only one book. He must take care of it for the rest of his life and it will help determine his life story. It’s extremely entertaining.

What were your favorite books growing up?

You probably won’t be surprised given my interest in anime that my favorite books tended to be fantasy and science fiction. Science fiction was really important to me in sixth, seventh, and eighth grades, people like Isaac Asimov and Robert Heinlein.

I really liked Arthur C. Clarke, a British scientist and sci-fi writer. He wrote a beautiful book called The City and The Stars. As a young girl growing up in Boston, it really lifted my imagination. It gave me my first vision of utopias where we’d want to live—it’s incredibly imaginative.

You are an expert in Japanese literature and anime. What would you suggest for insight into Japanese culture?

As a teenager, I started to get interested in Japan after seeing the Japanese collections at the Museum of Fine Arts—art is a good place to start. I would also recommend haiku poetry as a way of understanding Japan—it’s very accessible. I taught a Japanese culture course last year and I had my students writing a haiku every week, and after being reluctant at first, they really got into it.

I think the first Japanese novel I ever read was Snow Country, by Yasunari Kawabata, who won the Nobel Prize; it was written in the 1940s. It may not seem relevant now, but it actually has a lot of what I think is so characteristic of Japanese culture. One is compartmentalization. It’s about a man named Shimamura, which literally means “island village,” who lives in Tokyo, but goes off every year to the countryside, where he has an affair with a kind of country geisha. He navigates between these two worlds, each very different from the other.

For a book about Japan in relation to Americans, I would recommend a book called Japanamerica by Roland Kelts. It’s about how much these two countries have been entangled with each other for a hundred years. Japanese culture was very big in the West in the nineteenth century, and then in the 1950s people like Kerouac and Ginsburg were getting into Japanese poetry, and now you have the anime boom in America.

Who is your favorite contemporary Japanese author?

I love Haruki Murakami’s works. His books are just so inventive. The Wind-Up Bird Chronicle is a great immersive read that takes you very, very far away. My other favorite novel of his is Hard-Boiled Wonderland and the End of the World, sort of two alternating stories. One is present-day Tokyo and the other one is a strange dream-like world and they kind of go back and forth and you eventually figure out what’s going on. It’s beautiful and poignant.

Who’s an author that your students would be surprised to see on your shelves?

P.G. Wodehouse—I find him so hilarious. My absolutely favorite is Right Ho, Jeeves. I mean, I actually still fall out of my chair laughing at it.

People wouldn’t necessarily think that a Japan specialist living in Cambridge in 2020 would be into Wodehouse. Evelyn Waugh said sometime in the forties or fifties, “Mr. Wodehouse’s idyllic world can never stale. It will continue to release future generations from a captivity that may be more irksome than our own.”

And having Bertie and Jeeves and Lord Emsworth to help me through this pandemic is really wonderful. As long as you can go into a bookstore and still find Wodehouse’s books, civilization has not completely collapsed.

I’m a total mystery-holic. I’ve pretty much read every mystery I can find. I like women writers, and in particular British women writers: Ruth Rendell, P.D. James, Agatha Christie. One who I think really deserves to be better known is Josephine Tey. My favorite book of hers is The Singing Sands, set in Scotland and the Middle East. It’s just a real tour de force.

Have any books particularly inspired you?

This is such a nerdy thing to say, but for books that inspired me, it’s The Lord of the Rings, hands down. That’s probably the closest thing I have in my life to a religious text. It’s what I turn to.

When 9/11 happened, I remember feeling so bereft and terrified and horrified. And I kept thinking of some lines from the Fellowship of the Rings. Frodo is very upset because an old enemy of his family was caught, but was allowed to live; he thinks he should have been executed. Frodo says, “It’s a pity Bilbo didn’t kill him when he had the chance.”

And Gandalf says, “Pity? It was pity that stayed Bilbo’s hand. Many that live deserve death. Some that die deserve life. Can you give it to them, Frodo? Do not be too eager to deal out death and judgment.”

We have another quotation from Gandalf on our kitchen cupboard so we can read it every day, especially in this time of COVID, of Frodo saying to Gandalf, about the terrible war going on over this ring.

“I wish it need not to happen in my time,” said Frodo. “So do I,” said Gandalf, “and so do all who live to see such times. But that is not for them to decide. All we have to decide is what to do with the time that is given us.” You know, I really love that.

When did you first read The Lord of the Rings?

I started when I was nine. Then we moved to Germany, so took me a while to get the final book, The Return of the King. I finished it in Munich when I was ten. I remember being so overwhelmed by it. There’s one scene where I cried and cried. Not to give too much away, but it’s not exactly a classic happily-ever-after fantasy novel. There’s a sense of loss and grief and sadness in it that was very shocking to me as a ten-year-old.

Maybe one reason why I liked Japanese culture is that doesn’t necessarily believe in happily ever after. It does believe in the beauty of what you have, but the beauty you have is partly beautiful because it is transient, because you can’t hold onto it.

That’s so interesting—that’s such a Zen thought.

I teach my students about it and I’m always surprised at how surprised they are. I guess it makes sense—they’re nineteen or twenty-year-olds, and they’re sort of like, “The world is beautiful because it fades? What?” But then they start getting it. And I think it’s a really fundamental approach that is one way of dealing with the world, and it can be actually very helpful.

I was thinking how transporting and transforming, in fact, books can be.

God, yes. I feel like I really inhabited The Lord of the Rings. And I then got very interested in adventure novels. Conrad’s one of my favorite writers, and Kipling is another one. When I was seventeen, I went around the world by myself, and it was awesome. I wouldn’t have done that if it hadn’t been for reading Conrad and Kipling and their stories of young adventurers.

I went to Japan my senior year in high school, and then I had an around-the-world ticket that meant that I could go anywhere I liked as long as I kept going the same direction. So I went from Japan to Taiwan to Burma to Nepal to India to the Middle East, and it was just marvelous. And I would not have done it without having read all those books. Of course they were young men in the books, but it never occurred to me that I couldn’t do what a young man could.

It is kind of mind-boggling now, though. My God, I never would let my daughter do that.