The Case of the Reappearing Art

On the rolling plateau along the border between Turkey and Armenia stand the ruins of the Cathedral of Ani, a magnificent building constructed between 989 and 1001 AD, along with many other long-abandoned churches in Ani, which was once called the City of 1,001 churches.

Now thousand-year-old paintings are coming to life again on the cathedral’s walls, thanks to Christina Maranci, Arthur H. Dadian and Ara Oztemel Professor of Armenian Art and Architecture at Tufts.

Within a century of the cathedral’s construction, the Seljuk Turks swept in from the east; during their occupation of Ani the cathedral became a mosque. It was then, perhaps, that its interior walls were whitewashed, covering whatever Christian art might have adorned the church. In the many hundreds of years since then, no one has seen more than hints that there were frescos hidden under the white paint.

But Maranci, the author of The Art of Armenia, managed to unearth some of the long-hidden frescos with the help of a simple tool: Adobe Photoshop. The result is not only fresh evidence of Armenian art long thought lost, but also a method to find even more hidden treasures from the ancient world.

Maranci published a paper in the Revue des Études Arméniennes about her findings, and has given talks around the country and in Armenia. “The response has been really exciting,” she said. “I was really glad to see that the experts in Armenia were thoroughly convinced, and really excited that this is a new tool to open up whole new chapters of Armenian art.”

Maranci used Photoshop a few years before on faded wall paintings at another Armenian church, the seventh-century Cathedral of Mren, located in a militarized zone in eastern Turkey. Access to Mren was restricted for years, so when Maranci finally was able to go one day in 2013, she spent as much time as she could in the crumbling building taking photos of the fading wall paintings. 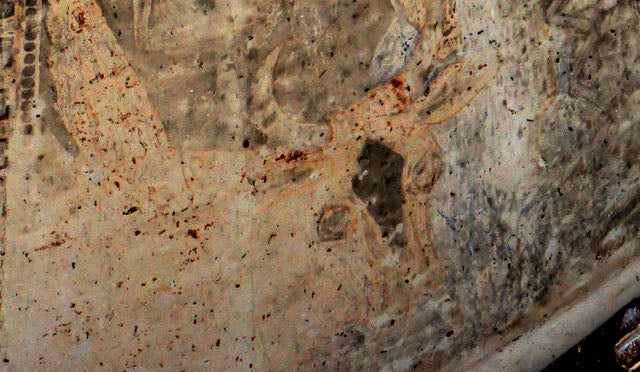 “The ox that emerged in the apse of the Cathedral at Ani using Photoshop is particularly elegant and sensitively wrought, with limpid, alert eyes, a dark diamond on his brow, and gently curved ears,” said Christina Maranci. Image: Courtesy of Christina Maranci
Back at her hotel later that night, she uploaded the Mren photos to her computer, and began to identify figures never before seen. Back at Tufts, with the help of Christine Cavalier, visual resources manager at the Department of History of Art & Architecture, she uploaded them to Photoshop, and using basic filtering was able to bring more details to light, helpful for her work as an art historian.

Then, last summer, Maranci read a master’s degree applicant’s essay that quoted expert opinions that there was no evidence in the art history literature about wall paintings in northern Armenian churches around the turn of the first millennium. Maranci thought the experts were wrong.

Suddenly she remembered digital photos she had taken of the whitewashed walls of the Cathedral of Ani over the years—it is not in a military zone and is accessible to visitors—and started to upload them into Photoshop. 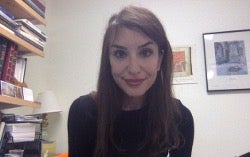 “I was really glad to see that the experts in Armenia were thoroughly convinced, and really excited that this is a new tool to open up whole new chapters of Armenian art,” said Christina Maranci.
After adjusting a variety of level, curve, and inversion tools in the software to enhance the photos, all of a sudden she saw the image of an ox emerging out of the whitewash in the apse at the front of the church.

Some detective work went into understanding the image, which had likely not been seen since the 1000s, said Maranci, who is chair of the Department of Art and Art History. She knew that oxen only appear a few times in the Bible: the vision of Ezekiel and in Revelations in the Gospel of John.

“In these two cases, which are often visually conflated in medieval art, a throne of God appears surrounded by an ox, a man or angel, a lion, and an eagle,” she said. “These figures quickly became symbols for the four evangelists: ox (Luke), man (Matthew), eagle (John), and lion (Mark).” The four are usually arranged with the ox and lion below the man and eagle, “reflecting the primacy of the Gospels of John and Matthew.”

A throne was also visible to the right of the ox; just to its left was another image, similar in size and shape to that where the ox was. It had a halo, and what looked like feathers. Maranci thinks it represents an eagle. Below that, where in Armenian medieval art a lion would be sitting, she found images that fit a lion, too.

Another photo of a partial inscription in Armenian yielded its secrets when Maranci searched a digital Armenian Bible for two phrases it contained: “has approached” or “having approached,” and “of God.” There was only one sentence with both: a passage in Luke 10:11.

But some images needed less translation. One photo featured “a very elegant looking angel with a narrow figure, beautifully articulated wings, and a nice halo,” said Maranci. “It was a very extraordinary image.”