To work toward equity, we must admit we aren’t colorblind and take steps to expand our personal networks, Tufts experts say

Many Americans endorse color-blindness, suggesting that “not seeing race” is a positive way of moving forward from a discriminatory past. But our research suggests the opposite. We all see race, 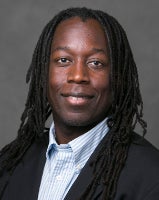 Keith Maddox is an associate professor of psychology and directs the Social Cognition Lab, focusing on stereotyping, prejudice, and discrimination. Photo: Jake Belcher

and we need to talk about it. First of all, racial biases affect the way most people in the US think. Even those of us who consider ourselves egalitarian make judgments based on unconscious assumptions rooted in bias.

In other words, your brain uses racial categories even when you’re sure that you don’t. That’s why résumés with “Black-sounding” names like Aiesha and Jamal elicit fewer call-backs from employers than ones with “white-sounding names” such as Ross and Ellen.

Once you become aware of biases like these, you can and should take intentional steps to mitigate their impact. Claiming you don’t see race gets in the way of addressing these problems.

Second, our research has demonstrated the importance of talking about color and race and differences, because these factors are connected to  the individual and structural disparities we see in our society, in everything from household wealth to incarceration rates. Getting people to talk about race is a first step toward understanding the roles it plays in people’s well-being and success.

Yet starting such conversations can be difficult. White people often feel anxious about discussing race for fear of appearing racist, and Black people and other individuals of color may be reluctant to engage in such conversations because they are exhausting and can make one a target of backlash and additional prejudice.

In one experiment, we discovered that simply telling white people that engaging in interracial interactions now can lower anxiety and facilitate future conversations about race made them more likely to choose to discuss racial discrimination with a Black person and less likely to express concern about seeming prejudiced.

We need to build on such results and figure out more ways to promote interracial interaction, while ensuring that everyone will be heard and respected. By acknowledging race and its enduring impact on our society, rather than pretending we live in a post-racial or color-blind world, we may be better able to understand and combat the societal inequities experienced by Black people and other racial and ethnic minorities. Science tells us that we are not color-blind; we must confront racial bias and injustice when we see it. 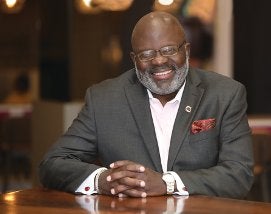 Doug Harris, A81, is CEO of The Kaleidoscope Group, LLC, a consulting firm focused on corporate diversity and inclusion. He was elected to the Tufts board of trustees in April and will begin his term this November. Photo: ©CapturedByKevin

If any one action can build a more just future, it is for people to expand their circle of confidants beyond their established comfort zone. If we’re really going to change institutions, their everyday decisions must come about equitably, which means leaders and others need to cultivate constant input from different circles of people.

When leaders make decisions during meetings, they’re doing the best that  they can, but if their perspectives are limited, their organizations’ solutions and outcomes will also be narrow, even if they consult everybody in the meeting—because the problem is, not everybody is in that meeting.

If you can’t figure out where your network should grow, write down the ten people you most trust to guide your decision-making. Then notice their ages, races, genders, education levels, religions. Become aware of missing perspectives and reach out to people who can help you to connect with potential new confidants. As you build your network, make sure it’s a two-way street by offering to help those who agree to expand your worldview.

Also, when you’re reaching out, be willing to learn. Not every conversation is going to be easy, but it’s about growth. This is critical for leaders, but it’s really important for people at all levels: Organizations are looking for more than just tolerance and capability. They’re looking for individuals who value and empower people from all backgrounds. By expanding your own circles, you’re building that muscle to lead appropriately in the future. —as told to Heather Beasley Doyle