Veterinary student’s research in Australia helped improve care for hundreds of animals with chlamydia, while medical research at Tufts looks for vaccine 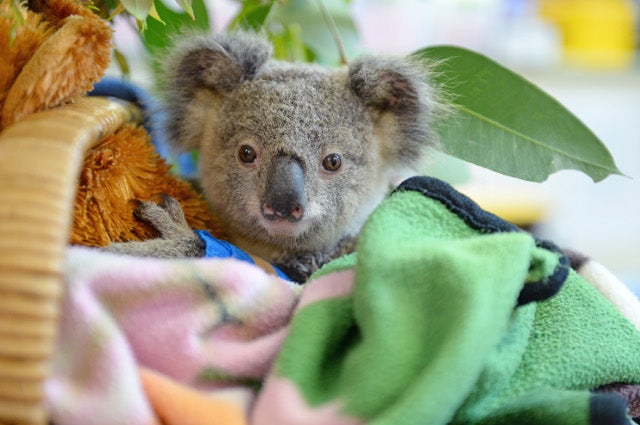 Did you hear the story of a koala that came into a hospital with chlamydia?

It sounds like the setup to a punchline. But Cummings School veterinary student Elliot Grossman, V21, wants to impress upon everyone the severity of this infection in koalas.

“I know the idea of a human sexually transmitted disease in koalas may sound goofy,” Grossman said. But the bacterial infection, which is caused by a different strain of the bacterium not contracted from humans, is “a significant risk to their survival—one of the leading causes of death,” he said.

Grossman saw the effects of chlamydia on koalas firsthand in the summer of 2019, when he traveled to Australia to conduct research through Cummings School’s International Veterinary Medicine (IVM) program.

Program director Felicia Nutter, V93, had introduced Grossman to veterinarian Rosie Booth, director of Australia Zoo Wildlife Hospital—a rehabilitation center located north of Brisbane. The hospital cares for 300 to 500 koalas a year, 40 percent of which are afflicted with chlamydia.

As in humans, chlamydia in koalas is spread via sex, as well as from mothers their newborns.

The infection can cause severe inflammation in the eyes, genital tract, and reproductive organs. If chlamydia goes untreated for too long, it can lead to permanent blindness and infertility in both humans and koalas. 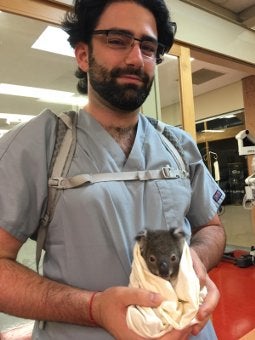 Elliot Grossman with a small patient in Australia. Photo: Courtesy of Elliot Grossman
The infection in the bladder can become so severe that areas of the bladder wall die and slough off. “That’s really common,” said Grossman. “Another name for chlamydia in koalas is wet-bottom, because of the frequent urine leaking and staining of koalas’ bottoms that occurs as a result of incontinence. The urinary-tract and other pain can become debilitating.”

Although public-health officials worry about rising rates of chlamydia and other sexually transmitted infections in people, chlamydia represents a far more dire threat to koalas.

That’s bad news for koalas because they’re also threatened by drought and wildfires, habit destruction, and other hazards related to human development, such as being hit by cars and attacked by dogs. The World Wildlife Foundation warns that koalas could become extinct by as early as 2050 if more conservation measures are not undertaken.

Informing Treatment Down Under

Fortunately, koalas with chlamydia can be healed and returned to the wild if they receive treatment and supportive care before the infection causes permanent damage.

Since 1986, Booth has treated koalas using antibiotics used for the human infection. However, many antibiotics can cause side effects in animals, including changes to the types of bacteria living in the gut that may impair koalas’ ability to properly digest their diet of eucalyptus leaves.

At Booth’s suggestion, Grossman set about comparing the outcomes and side effects of the two antibiotics most commonly used to treat chlamydia in koalas: chloramphenicol and doxycycline.

“The wildlife hospital veterinarians had a pretty strong suspicion that chloramphenicol was causing more side effects and had potentially worse survival rates than doxycycline,” said Grossman. “But there was no published research comparing the two treatments.”

For a retrospective study comparing the two medications, Grossman looked through “loads and loads of electronic and paper medical records” of koalas treated for chlamydia, he said, collecting details on side effects and outcomes for each individual animal. He then worked with Cummings School research assistant professor Adam South, AG12, to conduct a statistical analysis of the data.

While the study found no significant difference in survival rates between animals treated with either antibiotic, it revealed important differences between the two treatments among the 311 cases reviewed.

For starters, “chloramphenicol had more treatment failures, which is when a patient ends up being put on another antibiotic to treat the original infection after it’s not resolved by the first course of therapy,” said Grossman.

When it came to side effects of the two treatments, Grossman said chloramphenicol also performed worse.

Koalas treated with chloramphenicol had higher rates of serious bone-marrow dysfunction and yeast infections in their gastrointestinal tract, he said. “They also showed more dehydration, depression, diarrhea, and weight loss” than koalas treated with doxycycline.

“These side effects are potentially dangerous in that they make a sick animal even sicker for a while—never the goal of treatment,” noted Nutter.

Koalas on doxycycline, on the other hand, “had a significantly higher probability of having no side effects whatsoever,” Grossman said.

His work is now helping koalas. “We have already used the information provided by the data review carried out by Elliot,” Booth said. “Hundreds of koalas throughout Australia have benefited from the research that has indicated that doxycycline is currently a better antibiotic to treat koalas with chlamydiosis than the previously widely used chloramphenicol.”

Grossman is not the only person at Tufts thinking about koalas with chlamydia.

Paola Massari, a research associate professor of immunology at Tufts University School of Medicine, believes koalas offer the perfect animal model to study the efficacy of new vaccines for chlamydia. 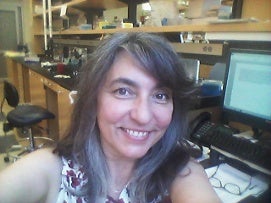 “The work is important in that it can give us good information, not only for the health of the koala, but also on how to draw parallels for findings for a human vaccine,” said Paola Massari.
“Koalas naturally get infected by this bacterium and develop disease, relatively similarly to humans,” said Massari. “So a vaccine study in koalas is not experimental in the same way that a mouse model is. It is more similar to a veterinary clinical study—one with the chance to stop a very bad disease in the koalas.”

Massari has been working on developing a human vaccine for chlamydia for about eight years. This research spun out of her interest in developing vaccines against sexually transmitted infections, including those caused by Neisseria gonorrhoeae, the bacterium that causes gonorrhea in humans.

She took advantage of her experience with proteins on the surface of bacteria—called outer membrane proteins—from both these organisms to design new hybrid proteins.

“I thought, ‘Why don’t I chop off the loops of the Neisseria protein, and put in the loops of chlamydia?’ Then I can obtain a hybrid protein to use in a vaccine,” she said.

Massari has since produced and examined twelve various combinations of MOMP loops added atop PorB and tried all these as potential vaccines in a mouse study of chlamydial infection. Three of the vaccines appeared protective in this model.

Now Massari has been talking to Peter Timms, a professor at University of the Sunshine Coast in Queensland, Australia, about trying her strategy in vaccine studies in koalas.

These kinds of studies are difficult, though. The research in wild koalas can only be done in Australia, and it is very expensive.

“Animals need to be captured several times to see if how they are faring and if the vaccine offers protection, and they must be handled very delicately by highly experienced researchers,” said Massari. “But the work is important in that it can give us good information, not only for the health of the koala, but also on how to draw parallels for findings for a human vaccine.”

Like several other sexually transmitted infections, chlamydia is increasing in prevalence among human populations worldwide. Massari said this is partly fueled by the fact that chlamydia can be asymptomatic in both women and men, allowing infection to go undetected and untreated in individuals, who then unknowingly further spread the bacterium.

A resurgence of gonorrhea has been linked to the progressive spread of strains of the bacterium that are resistant to the antibiotics used to treat it. And public-health professionals worry that chlamydia is showing signs of antibiotic resistance as well.

Developing vaccines for these all-too-common sexually transmitted infections is becoming more critical because someday soon it may become impossible to treat them with antibiotics, said Massari. In addition, by reducing the need to use antibiotics to treat illnesses like chlamydia in the first place, vaccines could help slow the development and spread of antibiotic-resistant strains.