Welcoming the Class of 2024—Online

For a virtual matriculation, videos, new faces, and alumni come together to create both an all-encompassing and personal reception 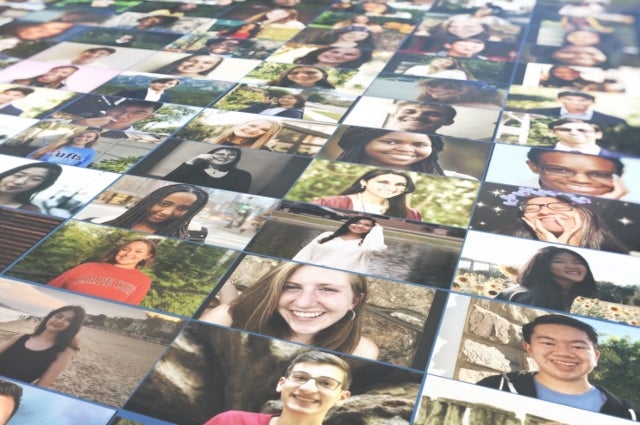 For more than six decades, matriculation at Tufts has been a well-choreographed celebration that unfolds on the Academic Quad, that leafy theater where first-year and transfer students, with the blessings of university leaders, embark on one of the most transformational experiences of their lives: college.

This year, university organizers didn’t have that quintessential New England stage, as large gatherings and events are put on hold because of COVID-19 safety protocols. Instead, they’ve drawn inspiration from different wellsprings, all of which collectively express the optimism inherent in matriculation.

The Matriculation 2020 online program is a first in the ceremony’s long history and offers fresh messages to uplift the new Jumbos. In addition to traditional remarks from university leadership, the virtual event includes greetings from fellow undergraduates, and a blessing, not from one chaplain as in the past, but, in relay-fashion, all seven members of the University Chaplaincy.

Carmen Lowe, dean of academic advising and undergraduate study, said that matriculation remains, as ever, a reminder that a ceremonial welcoming of new students into the Tufts community is an important milestone in their time at the university.

“Our aim is to use the versatility of online tools to reassure students that, while this year is distinctly different, as always they are part of a community supporting them in their adventures ahead,” she said. “I’m particularly pleased that we could add more voices than we have before—including alumni and other students—at the same time that we highlight the richness of Tufts’ history and traditions with these videos.”

Watch the welcoming video for the Class of 2024.

The 1,620 undergraduates who make up the Class of 2024—first years as well as 130 transfer students—has historical distinction of its own.

It is the most racially and ethnically diverse first-year class on record and was selected from the largest applicant pool on record, said JT Duck, dean of admissions and enrollment management, who had a blog post about the class. Tufts received 23,127 undergraduate applications; admission was offered to 16.3 percent, or 3,770. (More on the class “by the numbers” below.)

In his recorded remarks, President Anthony Monaco warmly welcomed the class and acknowledged the challenges that come with a global pandemic.

“I could not be more excited to say the following words: Welcome, Class of 2024,” said Monaco, who went on to say that “entering Tufts is a great privilege—and like starting anything new, it can also be a daunting prospect, especially in this moment as we face the evolving challenges presented by a global pandemic.”

He noted that they were “ready for this challenge—and I am confident that you will all thrive here at Tufts. We invited each of you to join this vibrant community because we see in you the curious minds, compassionate hearts, and commitment to action that we prize in our students and alumni.”

Watch a video on five things to know about Tufts.

Jonah Apo, E22, Kānaka Maoli or Native Hawaiian, from Honolulu, began the ceremony with a land acknowledgment, the first for a matriculation ceremony. Tufts, he said, resides on the lands that once were home to Mashpee Wampanoag, Aquinnah Wampanoag, Nipmuc, and Massachusett tribal nations.

In another first, undergraduates and alumni welcomed the new class. Hana Tzou, A23, and Siobhan Shamlian, A20, brought a light approach to the proceedings by playing their version of Truth or Dare.

“What should the Class of 2024 and incoming transfer students keep in mind as they become Tufts students?”  Tzou asked Shamlian, who opted for “truth.”

“College, especially your first year, will not always feel like the best time of your life,” Shamlian said. “College is hard, and the restrictions we are all facing this semester will make it harder.... Just relax. Breathe. You don’t need to have everything figured out right now. Take it one day at a time. And don’t be afraid to utilize resources such as such as Counseling and Mental Health Services, the chaplaincy, or the StAAR Center. We all need help sometimes.”

“We dare you to be kind. In a world that profits from competition and greed, empathy is a radical act,” said Tzou. “We dare you to use your skills, talents, and time to help those around you. . . . We dare you to shake up our world and let it transform into one more equitable, just, and humane. We dare you to make your dreams a reality.”

The matriculation site’s videos include well wishes from undergraduate alumni and a brief lesson on the history of matriculation at Tufts. Things were certainly different in the early days, as one video shows: students who signed what’s known as the Matriculation Book in the years 1854-1869 affirmed they would abide by college laws—including getting permission from the college president before considering an off-Hill excursion to the likes of Harvard Square.

Watch a video about the history of matriculation at Tufts.

In the Class of 2024, women account for 54.9 percent of enrollment, and men 43.7 percent. Students who identify as genderqueer, non-binary, or preferred not to specify a gender identity account for 1.4 percent of the class.

Laura Ferguson can be reached at laura.freguson@tufts.edu.