Chasing down a childhood ambition, engineering student David Gelfand trains for the Paralympics with the U.S. national team 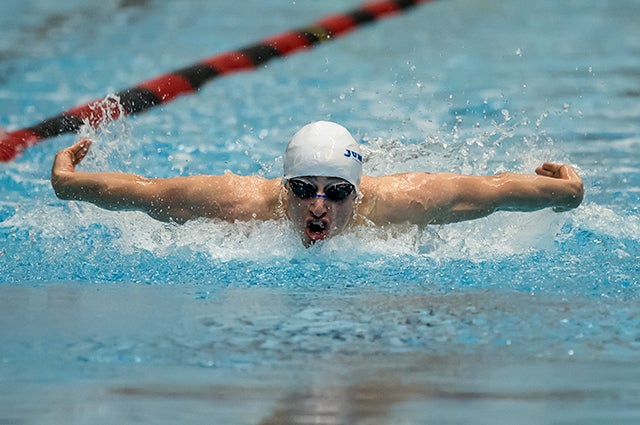 David Gelfand, E22, has sampled many an aquatic environment—from the pool at the Wilton, Conn., YMCA, where he swam as a part of the club team, to the one in Lima, Peru, where he won two bronze medals at the Para Pan American Games.

But his favorite place to swim is the Pacific Ocean. Every October when he was younger, he competed in a 1.2-mile swim in La Jolla Cove as part of a triathlon held by the Challenged Athletes’ Foundation (CAF), an organization that supports physically challenged athletes with specialized equipment, training, and mentorship. “The saltwater, the seaweed, the people around you, the different waves and currents—it’s cool, being in an environment like that,” said Gelfand. Is it scary to head into the open ocean, not knowing what challenges might await? “I’ve never worried about swimming in the ocean,” Gelfand said. “I’ve always been really comfortable in the water.”

Now Gelfand is striking out into even more challenging waters: He took last semester off from Tufts to train at the United States Olympic and Paralympic Training Center in Colorado Springs as a member of the U.S. national team, with the goal of qualifying for the 2020 Paralympics in Tokyo (now tentatively set to start August 24, 2021). He broke the pan-American para-swimming record for the long-course 400-meter individual medley in January. When the center closed in March due to COVID-19, he was one of a handful of athletes to remain, continuing to train with the aid of a swimming/rowing machine.

Born with a condition called proximal femoral focal deficiency, Gelfand has a left hip that didn’t fully form and a short leg. He’s never let it hold him back. Growing up in New Jersey, he learned to toddle on a prosthetic leg and was running by the time he was two. He got a running prosthetic when he was five and was soon playing hockey, baseball, and soccer, as well as biking, hiking, and skiing, often leaving his family in the dust. “He’s never been afraid to try something new and figure out how to adapt,” said his mother, Linda.

There was one activity, though, where no adaptation was needed. At his first Daddy and Me swim class as a baby, Gelfand put his head underwater without hesitation. He was swimming on his own by age four and doing CAF triathlons by elementary school. “I liked the freedom of being in the water. I didn’t need any sort of special equipment—I was able to compete on the same playing field as my peers,” Gelfand said.

Competing became a focus after he attended an event and met Paralympic swimmer and double leg amputee Rudy Garcia Tolson. “I admired the way he carried himself, and the way he continued to give back to his community,” Gelfand said. “He was always at events, mentoring younger athletes and helping them to see what is possible.”

Gelfand was aiming for the Paralympics by the time he was six. “I remember coming up to my coach and telling him, ‘Oh, look at the national team standard—I’m fifteen seconds off in fifty freestyle,’” Gelfand said with a laugh. “Of course, fifteen seconds is a long way to go in a thirty-second race.” But he got right to work closing that gap and was outswimming his non-disabled peers on the Wilton YMCA club team by middle school. During high school, he was often in the water by 5 a.m. and back in the water for two or more hours in the afternoon. Rather than being draining, it was refreshing. “If I’m having a tough day, swimming helps relieve some of that stress,” Gelfand said. “It’s a good time to take a step back from my emotions and the rest of the day.”

Contributing to a team is also a huge motivator, said Gelfand, who as a first-year student helped the Tufts Swim Team win its first NESCAC title in 2017. “It’s about feeding off the energy and enthusiasm your teammates bring, and bringing your own to practice, and giving just a little bit more so the team can achieve the big goals we set for ourselves,” he said. The team’s head coach, Adam Hoyt, said Gelfand’s hard work last year was an inspiration to his fellow swimmers. “I’ve seen David connect better than ever before with his teammates, which has helped us move toward team and program goals,” said Hoyt, who worked with Gelfand one-on-one outside the team’s season.

Gelfand has balanced swimming with a mechanical engineering major and engineering management minor at Tufts. A builder by nature, Gelfand designed and 3D-printed a device to help him ride his bicycle a few years ago, and for a class last spring built a robot that starts dancing when you come close. He hopes to work on assistive technology when he graduates. “I really want to design medical devices, because I’ve seen how much adaptive equipment has helped my friends and other people in the Paralympic world,” he said.

What makes a good engineer? “When you get a tough problem, you have to have the ability to continue—to say, ‘OK, I’ll start here and work through it bit by bit till I achieve the larger goal,’” Gelfand said. It’s similar to what makes a strong swimmer. “It’s really just a willingness to work hard, and to be able to take advice,” Gelfand said. “Nobody starts out with perfect technique. You have to be able to listen to coaches and have the mental discipline to use what they tell you to change what you’re doing over time, and make yourself better.”

There may be one more thing that makes a strong swimmer, if Gelfand is any indication: a passion for pushing limits. “I’m driven by the feeling of wanting to improve, wanting to get somewhere I haven’t, to be just a little bit better than I was before,” he said. “One of the things I love most about swimming is diving into the water and just seeing what I can do.”