Faculty, staff, and students can take part in the effort 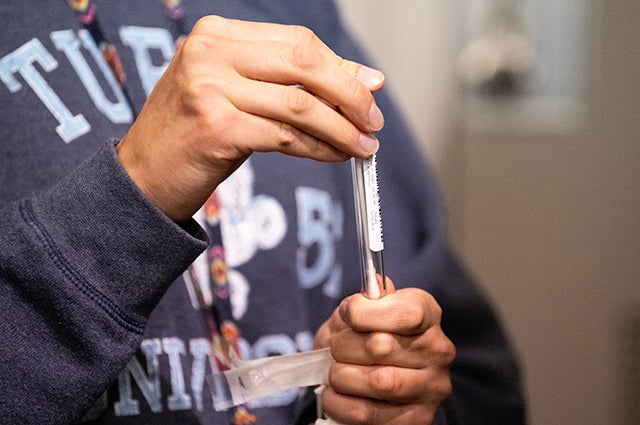 Tufts University has launched a pilot study that aims to help K-12 students safely return to their schools, and it is calling on the Tufts community to take part in the effort.

The study, which began Sept. 14, will look at whether the simple type of nasal swab sampling that the university already uses in its COVID-19 surveillance testing can be analyzed in batches. If effective, such “pooled” testing would be much less expensive than individual analysis, putting it within financial reach of K-12 schools that want to conduct their own surveillance testing.

Tufts is hoping to recruit 2,400 volunteers for the study from among the students, faculty, and staff who are already doing regular COVID-19 swab tests on the Medford/Somerville campus. Once they sign a short online consent form, the rest is simple: The next time they report to 62R Talbot St. for a scheduled test, they will already be enrolled.

“You tap your ID card, and the card reader will detect that you are going to be in the study,” said Caroline Genco, vice provost for research, who is leading the effort. Testers will be handed an extra swab and tube to collect a second nasal sample, just as they normally do.

While the first sample heads out for individual testing, Tufts researchers at an on-site lab will take that second sample and repackage it in a larger tube with swabs from seven other volunteers to be tested as a pooled sample. Researchers will send the pooled swabs to the Broad Institute, which already processes all of Tufts’ COVID-19 tests. But for this pilot study, it will analyze the samples eight at a time.

In real life, when a pooled sample comes back positive, all the people in that pool are retested, essentially homing in on the positive case; quarantining and contact tracing can then begin. For the Tufts study, because the same population is also participating in regular traditional testing, if positive results on individual tests show up in the corresponding pooled tests, it will mean the pooled test method is valid.

Studies have already found pooled testing to be effective with another type of COVID-19 test, one where swabs have to be transported in liquid-filled tubes. The Broad Institute’s method, which uses dry tubes, requires less equipment and fewer supplies and personnel.

Even with the retesting after a positive hit, pooled testing is less expensive than large-scale individual testing because it requires only a fraction of the analysis. That’s why Tufts hopes a pooled testing option can benefit the schools in its host communities.

If Tufts can validate the dry pooled protocol in this pilot study, the university would work with neighboring municipalities to facilitate testing for local schools, which could then run their own surveillance testing programs.

“With this pooling technique, schools could potentially have capacity to test 12,000 students, faculty, and staff per week” Genco said. Pooled testing could also trigger expanded testing for those even potentially at risk. “If you pool in the schools and one of those pools comes back positive and you have to retest those eight kids individually, you could also test their family members,” Genco said. “It’s a way to really nip this in the bud as quickly as possible.”

Tufts has learned many lessons in setting up its own COVID-19 surveillance testing system, which has already completed more than 32,500 tests. The university wanted to find a way to build on that knowledge to benefit its host communities, Genco said. “We really need to make sure we protect our community, not just the students, faculty and staff on our campus,” she said. “We interact so much with our host communities, it’s important that we protect them as well.”

Volunteers can enroll in the Tufts Pooled Pilot Study here.